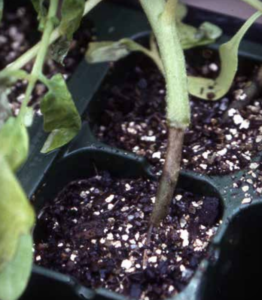 Pythium species and Phytophthora species – Pre-emergence damping-off commonly occurs with these fungi and typical symptoms are a soft mushy rot and dark brown to black water-soaked lesions that rapidly spread over the entire seedling. Post-emergence damping-off is characterized by dark colored water-soaked lesions that start on the roots and spread up the stem to above the soil-line. The lesions continue to expand above the soil­ line, eventually girdling the stem, causing the plant to wilt and die.

Rhizoctonia solani -Preemergence damping-off is characterized by tan to reddish-brown lesions developing on the seedling and by the death of the growing tip. Postemergence damping-off symptoms include reddish brown to black lesions developingon the roots and the lower stems at or below the soil-line. The stem becomes constricted and infected seedlings quickly wilt and die. Older plants can become infected, however, as the plant matures it becomes more tolerant to infection and the lesions are usually restricted to the cortical zone.

These fungi generally survive for long periods in soil and may persist in plant debris or on roots of weeds. Damping-off tends to be most severe under conditions of high soil moisture, overcrowding, compaction, poor ventilation and cool, damp, cloudy weather. In greenhouses, damping-off can be more common when improperly pasteurized soil or previously used seedling trays are used for planting. Water splash can move infested soil from diseased to healthy plants and spread this disease.