The term “pink root” reflects the most obvious symptom of this disease. Infected roots show a light pink color that become deeper pink or red with time and finally purple-brown as the roots shrivel and disintegrate. New roots may continue to form and then be killed by the fungus. Plants with severe infections appear to suffer from nutrient deficiencies or drought, and the leaves turn white, yellow or brown starting at the tips and eventually die. Leaf number and size are reduced and the plants are easily uprooted. Plants infected early in the season start bulbing prematurely and show more damage than those infected later. Note that the older roots of resistant cultivars will also display the pink color due to fungal infection as the roots senesce. However, resistant cultivars suffer very little loss of yield in the presence of the pathogen. Bulbs from infected plants are usually undersized and of reduced market value. 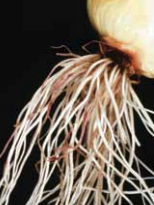 The fungus is generally considered ubiquitous and can survive in the soil, in diseased roots and the debris of susceptible crops for several years. The fungus can be spread through soil movement and in surface water. This disease can develop at all soil moisture levels that allow onion growth. This pathogen will attack healthy crops in warm onion growing regions. Optimum temperatures for growth of the pathogen and disease development are 24-28°C (75-82°F). Little disease will develop when temperatures drop below 16°C (60°F).

Resistance to the pathogen varies among cultivars, thus resistant cultivars should be planted when possible. Resistance may be overcome if soil temperatures of 28°C (82°F) or higher occur. Planting so the bulk of the root growth occurs prior to reaching soil temperatures that favor disease development can minimize severe losses from this disease. Long term rotation (4-6 years) with non-host crops, such as cereals, helps reduce losses. Also, soil solarization or fumigation can help to reduce pink root and increase marketable bulbs.