The growing crop seldom shows symptoms until harvest. However, this disease can be very destructive on stored onions. The fungus can invade the young healthy leaf tissue, but it usually infects the neck directly or through wounded tissue. This tissue becomes soft and spongy as the fungus continues to grow into the bulb. Affected parts of the bulb are brown and water-soaked, and the diseased tissue eventually collapses and becomes spongy. A white to gray mycelial growth eventually develops between the bulb scales and masses of small black sclerotia may develop on the outer scales around the neck. In addition to neck rot, Botrytis allii has been implicated in causing a soil-line rot. Other Botrytis species can also cause this disease. The fungus penetrates the outer scales of the bulb initiating a rot that is exacerbated by secondary invaders. 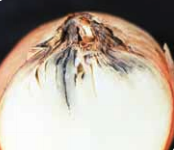 Under prolonged wet conditions the fungus can sporulate on dead and decaying tissue in the field as well as from sclerotia. Wind readily disseminates these conidia to other plants where they can infect the neck of the plant through wounds or cuts. Disease spread is most rapid during moderate temperatures with high humidity, rainfall or overhead irrigation. The condition of plants at harvest is important since infection can be more severe if necks are still succulent. Also, storing uncured onions at temperatures and humidity that are too high can promote disease development and spread. Soil-line rot is often more severe when onions are transplanted and during cool, moist weather.

Use varieties that are adapted to the growing area to ensure that the plants mature by harvest. Avoid excessive late season fertilizing, which may delay maturity. Adjust plant spacing and row orientation to obtain the best air movement through the plants. Avoid injury to the onion neck and damage to the bulbs, especially at harvest. Field applications of fungicides prior to harvest may reduce disease severity. Destroy onion cull and debris piles that may serve as a source of inoculum. Deep plow fields with a history of the disease to bury the sclerotia and rotate out of onions in these fields for several years. Be sure bulbs are cured and remove damaged bulbs before storage. Do not allow moisture condensation to form on the bulbs and use cool temperatures and moderate humidity for bulb storage.