Fusarium species – The fungus may cause both pre- and post-emergence damping-off. Roots are invaded and eventually turn dark red or black as they decay. Seedlings are unthrifty and stunted, eventually turn yellow, wilt and die.

Pythium species – Symptoms on young seedlings are similar to those caused by Rhizoctonia. A water-soaked lesion develops on lower stems and a watery rot occurs on the roots. The roots may turn black as they decay. The fungus can also attack seeds and cause a watery decay. Older plants that are infected are stunted and yellowing and wilting of leaves may occur during severe infections.

Rhizoctonia solani – Seeds may rot before germinating and seedlings may decay before emergence. A brown rot develops on roots and lower stems at or below the soil line, and infected seedlings quickly wilt and collapse. 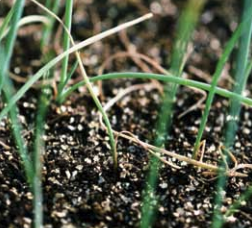 The fungi that cause damping-off are usually common in an onion production field. These fungi generally survive for long periods in soil and may persist in plant debris or on roots of weeds. Damping-off tends to be most severe under conditions of high soil moisture and compaction. Moderate temperatures, especially when onion crops are grown in succession, favor this disease. In greenhouses, damping-off can be more common when improperly pasteurized soil or previously used seedling trays are used for planting. Water splash can move infested soil from diseased to healthy plants and spread this disease.