Wilts and Root Rots of Peas

Wilts and Root Rots of Peas

» Peas are often the first crop planted in the spring, which can expose them to cold, wet soil conditions that favor the activity of
root infecting pathogens.
» Soilborne, root infecting pathogens cause damping-off, root rots, and vascular wilts.
» The management of these diseases involves avoiding fields with a history of disease, long-term crop rotations, ensuring good
soil conditions, seed treatment fungicides, and resistant varieties, depending on the disease.

Fusarium wilt is caused by several races of the fungus Fusarium oxysporum f. sp. pisi. Races 1, 5, and 6 cause pea wilt, while race 2 causes near wilt.1,2 Races 1 and 2 are widespread and economically important in most pea growing regions around the world. Races 5 and 6 have only been found in the state of Washington and the province of British Columbia.2,3 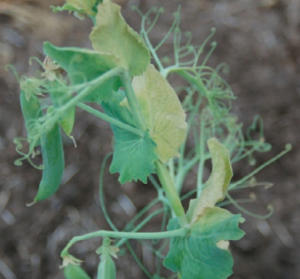 Pea Wilt: Symptoms of pea wilt develop initially on young plants. Leaves yellow and curl downward, starting on leaves at the base of the plant and progressing upward. The wilt and yellowing symptoms may form on only one side of the plant (Figure 1). Leaves and stems can become brittle, and plants can be stunted. The vascular tissue develops a yellow-orange discoloration, starting in the roots and lower nodes of the stem, especially on early maturing varieties. The disease develops rapidly at temperatures above 68°F, and whole plants can wilt and die. Symptomatic plants can be scattered or occur in patches (foci) in the field.1,2,3,4,5

Near Wilt: Above ground symptoms of near wilt are similar to those of pea wilt but typically occur later in the season and are less pronounced.1,2,3 An orange to brick-red vascular discoloration starts in the roots and progresses up to the top of the stem. Symptomatic plants are usually scattered in the field, and the disease is most common on mid- to late-season varieties.1,2

The Fusarium wilt fungi can survive in the soil indefinitely.1,2 The fungi infect through the roots and grow into the waterconducting tissue. Pea wilt is favored by cool soil temperatures (70°F), and plants are usually infected early in the season. Near wilt is favored by late planting and warmer soil temperatures (79°F).1,2,5 The wilt pathogens are spread in infested soil, infested plant debris, water, and on equipment. The diseases have also been shown to be seedborne.1,2

The use of resistant varieties is the most important management strategy for both pea wilt and near wilt, and many commercial varieties have resistance to one or more races of the Fusarium wilt fungus. The resistance to race 1 has been used for over 70 years and is very stable. The resistance to race 2 has not been used as commonly as race 1 resistance. Race 5 of the pathogen can overcome race 1 resistance, but there are also resistance genes effective against races 5 and 6. Pea varieties with these genes are used mostly in western Washington and British Columbia.1,2,3 Rotation to non-host crops (crops other than pea) can help prevent the buildup of inoculum in the soil. Early planting can help reduce the development of near wilt.2,4

Several pathogens can infect the roots and lower stem, causing root rot (foot rot), and sometimes two or more pathogens can infect the same plant. Common pathogens in the root rot complex include species of Fusarium, Didymella, Thielaviopsis, Aphanomyces, Rhizoctonia, and Pythium. These pathogens are common and widespread. Root rot results in general symptoms of reduced stands, poor emergence, stunted plants, chlorotic leaves, premature ripening, and brown to black discoloration of the roots and lower stem.4 Details for individual diseases are described below.

The management practices used for the root rot pathogens are similar. The recommended practices include long term crop rotations, avoiding fields with a history of disease, alleviating soil drainage and compaction problems, and the use of seed treatment fungicides for the damping-off phases.4

Fusarium Root Rot: The Fusarium root rot fungi infect the hypocotyl and upper tap-root and then spreads throughout the root system. Reddish-brown to black streaks develop on the primary and lateral roots. Root lesions become darker with age, and the infected tissue becomes shrunken and constricted. Stunting and chlorosis of above-ground plant parts typically start to appear at flowering.2,3,5

Fusarium root rot is favored by wet soil and temperatures between 73° and 83°F. The severity of root rot increases as plant stress increases from factors including soil compaction, limited soil moisture, soil temperatures above 86°F, soil pH above 7.5 or below 5.1, poor soil fertility, herbicide injury, poor seed vigor, and nematode damage.2,3,5 The pathogen survives in infested soil and crop debris and can be seedborne.5 Rotations of five years or more can reduce disease severity.2

Aphanomyces Root Rot: Aphanomyces root rot is one of themost widespread and destructive diseases of peas, and it is especially problematic in the Great Lakes and Northeastern regions of the U.S. The fungus-like pathogen infects the cortex of primary and lateral roots at any stage of plant development. Light-brown lesions form on infected roots (Figure 2), and the lesions become soft and darker with age. The colonized cortex tissue can slough off, leaving the vascular tissue. Above-ground symptoms are typical for root rot diseases, and infected plants may form pods with few seeds.2,3,5 The pathogen survives in the soil and can remain viable for 10 to 20 years. The disease spreads in infested soil and crop debris. Cool, wet conditions favor infection and disease development. However, warm, dry conditions can enhance symptom expression once the plants are infected. The disease is most likely to appear in the wet, low-lying areas of the field. The pathogen can infect other legumes, including lentils.5 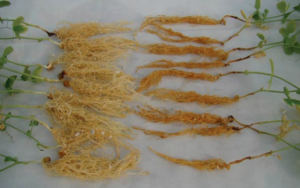 Field soils should be tested before planting to determine the inoculum levels of the pathogen. Fields with high inoculum levels or a history of the disease should be avoided. Longterm crop rotations of six years or more can help prevent the buildup of inoculum, and it has been shown that an oat pre-crop can help reduce disease severity in a following crop of peas. No fungicides are currently registered for use against Aphanomyces root rot.2

Pythium Seedling Rot: Several species of Pythium, a funguslike pathogen, cause seed and seedling rots of peas. These pathogens cause a watery soft-rot of seed and young seedlings. On older seedlings, infections are usually restricted to the smaller feeder roots, resulting in root pruning. Infected roots show a tan to light-brown discoloration. Pythium rots are favored by high soil moisture, soil compaction, and poor seed vigor. The pathogens survive as spores in the soil, and they have wide host-ranges.2,5 Resistance to Pythium rot is available in some varieties, and seed treatment with fungicides effective against the water molds can be effective. Maximizing the speed of emergence by planting in warm soil, using high quality seed, and using a shallow planting depth can help reduce problems with Pythium rot.5

Rhizoctonia Rots: The fungal pathogen Rhizoctonia solani can cause seed, seedling, and root rots on peas. Seeds infected with Rhizoctonia can rot in the soil, resulting in poor emergence. On seedlings, reddish-brown, sunken lesions can form on roots and lower stems, and root tips can be pinchedoff. The pathogen survives in soil and the disease is favored by cool, wet conditions that slow germination and emergence. The disease cannot be managed by crop rotation, and no resistant varieties are available. Seed-treatment fungicides can be used to help manage Rhizoctonia seed and seedling rots.5

Thielaviopsis Root Rot: The fungal pathogen that causes Thielaviopsis root rot is widely distributed and has a wide host range that includes many vegetable and weed hosts. The disease on peas is not particularly important on a global scale, but it can be economically damaging in localized areas.2,3 The fungus infects roots, causing dark-brown to black, elongated lesions on taproots and laterals. The lesions enlarge and coalesce, forming large, black necrotic areas. Severely infected plants are stunted and chlorotic and may die prematurely.2

The pathogen survives in the soil as spores, which can remain viable for many years. The disease is spread in infested soil and crop debris as well as by water and contaminated equipment. Thielaviopsis root rot is favored by high soil moisture levels and soil temperatures around 82°F. Crop rotation can help prevent the buildup of inoculum in the soil, and the planting of rye has been shown to suppress the pathogen.2,3

For additional agronomic information, please contact your local seed representative.
Performance may vary from location to location and from year to year, as local growing, soil and weather conditions may vary. Growers should evaluate data from multiple locations and years whenever possible and should consider the impacts of these conditions on the grower’s fields. The recommendations in this article are based upon information obtained from the cited sources and should be used as a quick reference for information about pea production. The content of this article should not be substituted for the professional opinion of a producer, grower, agronomist, pathologist and similar professional dealing with this specific crop.
BAYER GROUP DOES NOT WARRANT THE ACCURACY OF ANY INFORMATION OR TECHNICAL ADVICE PROVIDED HEREIN AND DISCLAIMS ALL LIABILITY FOR ANY CLAIM
INVOLVING SUCH INFORMATION OR ADVICE.
9062_SE_S1 Published 10-14-2020