» Grafting watermelons can provide resistance to disease, increase tolerance to unfavorable conditions, and increase yields.
» Bottle gourd and interspecific winter squash hybrids are the most common rootstocks used for grafting watermelon.
» Specific rootstock/scion combinations should be tested before large-scale use.

The two main types of plants used as rootstocks for grafting watermelons are bottle gourd (Lagenaria siceraria) and interspecific winter squash hybrids (Cucurbita maxima x Cucurbita moschata) (Figure 1). Bottle gourd rootstocks provide resistance to Fusarium wilt and chilling tolerance. Root growth of bottle gourd rootstocks is usually not as vigorous as the growth of the interspecific hybrid rootstocks, but they are earlier in maturity. Grafting onto bottle gourd does not usually impact flowering or fruit quality.2 Bottle gourd varieties that have been used for grafting watermelon include ‘Coloso’, ‘Emphasis’, ‘Macis’, ‘Skopje’, ‘FR Gold’, ‘Jingxinzhen No.1’, ‘WMXP 3938’, and ‘WMXP 3945’.4,5,6,7

Interspecific winter squash hybrids also provide resistance to Fusarium wilt and chilling tolerance. Root growth is vigorous (Figure 1), which can lead to delays in flowering if not properly managed. Fruit from plants grafted on to hybrid rootstocks sometimes have lower sugar contents and off flavors, but this can be corrected through proper fertilization and irrigation.2 Interspecific hybrid varieties used for grafting watermelon include ‘P360’, ‘Marathon’, ‘RS 841’, ‘Shintosa’, ‘Shintosa Camel’, ‘Strong Tosa’, ‘Carnivor’, and ‘Qingyanzhen No.1’.4,6,7,8

Citron melon (Citrullus lanatus var. citroides) has resistance to root-knot, and the variety ‘Ojakkyo’ is being evaluated as a rootstock to provide root-knot resistance for watermelon. Unfortunately, ‘Ojakkyo’ is susceptible to Fusarium wilt.4 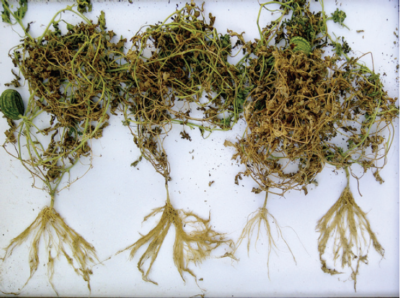 Figure 1. Root systems of watermelon scion ‘Delta’ grafted onto rootstock ‘Marathon’, an interspecific winter squash hybrid. The two plants on the left and the plant on the right are grafted. The second plant from the right is non-grafted.

With the phase-out of methyl bromide as a soil fumigant, the management of soilborne diseases of watermelon has become more difficult, and grafting may be a feasible management option. Research has shown that grafting can help manage over ten different soilborne diseases of watermelon, including those caused by fungi, bacteria, and nematodes. Some rootstock may provide resistance to foliar diseases as well.1

Resistance to Fusarium wilt is one of the main reasons for using grafted watermelons. The watermelon market has shifted from seeded, diploid types to seedless, triploid types, and most triploid varieties are susceptible to all four races of the Fusarium wilt fungus.4 Bottle gourd and C. moschata x C. maxima hybrids provide resistance to up to three races of the watermelon Fusarium wilt pathogen.8 Grafting on to these rootstocks has been shown to be as effective as fumigation for controlling Fusarium wilt. One study found that non-grafted, susceptible watermelons developed symptoms on more than 52% of plants in a Fusarium infested soil, while the same watermelon variety grafted onto either bottle gourd or hybrid squash rootstocks had fewer than 6% of plants showing wilt symptoms.8 The extra cost of the grafted seedlings was more than covered by the increase in fruit production in this study.

Bottle gourd and hybrid squash rootstocks are more susceptible to root-knot nematode than are non-grafted watermelon plants in terms of root gall formation with 78 to 99% galling on grafted plants and 36 to 50% galling on non-grafted plants.5 However, even with increased root galling, some interspecific hybrids, notably ‘RS 841’, result in higher yield and fruit quality in the presence of root-knot because of the higher root vigor and faster root regeneration rates. Citron melon and wild-type watermelons do provide some resistance to root-knot nematode when used as rootstocks for watermelon, showing 11 to 44% galling in the study above.

Grafting may also be helpful in managing other soilborne diseases including Phytophthora root and crown rot and Verticillium wilt. While none of the rootstocks evaluated so far have been identified as resistant to Phytophthora, some of them are more tolerant than non-grafted commercial watermelons. The same is true for Verticillium wilt, with some rootstocks being less susceptible than non-grafted watermelon plants.1 Grafted plants may also show increased tolerance to some viral diseases. However, one study found that grafted watermelon plants were more susceptible to Cucumber green mottle mosaic virus than were non-grafted plants.

Watermelon grafted onto bottle gourd and squash hybrid rootstocks can tolerate cool conditions in part because they are better at absorbing nutrients at the lower temperatures. As a result, grafted watermelon plants can be transplanted earlier in the growing season. Greater tolerance to drought conditions was seen when watermelons were grafted onto wax gourd, when compared to non-grafted and bottle gourd grafted plants, and the use of salt-tolerant rootstocks has been shown to provide better plant vigor, higher yields and improved fruit quality when compared to watermelon self-grafted control plants growing in saline soils.1

The more vigorous root growth of some rootstocks results in increased absorption and translocation of soil nutrients including nitrogen, magnesium, phosphorus, iron, and calcium. The higher nutrient levels help increase the rate of photosynthesis, especially under sub-optimal light conditions, such as in greenhouses in the winter.1 Grafted plants can also show higher levels of nitrogen use efficiency, reducing the need for nitrogen fertilization.3

With more vigorous root systems, increased nutrient absorption and utilization efficiency, higher tolerance of stressful conditions, and improved disease resistance/tolerance, grafted plants often produce more and/or larger fruit. In some studies, grafted watermelons were 30 to 50% more productive than non-grafted plants, even with fewer plants per acre.2 Higher yields are most noticeable with disease pressure and other sub-optimal conditions.1 However, some rootstock/scion combinations can result in yield reductions if the rootstock and scion are not fully graft compatible or if the rootstocks are not well adapted to the growing conditions.

Another concern is the effect of the rootstock on fruit quality and yield. Flowering can be delayed on some rootstocks under some conditions, which delays fruit maturation and harvest. Rootstocks can also have an effect on sugar accumulation and flavor. In some cases, fruit from grafted plants have lower brix levels, off flavors, discolorations of the flesh, and internal tissue breakdown. Growers should test specific rootstock/scion combinations under their specific growing conditions with small numbers of plants before committing to large areas of grafted plant production.1

Performance may vary from location to location and from year to year, as local growing, soil and weather conditions may vary. Growers should evaluate data from multiple locations and years whenever possible and should consider the impacts of these conditions on the grower’s fields. The recommendations in this article are based upon information obtained from the cited sources and should be used as a quick reference for information about watermelon production. The content of this article should not be substituted for the professional opinion of a producer, grower, agronomist, pathologist and similar professional dealing with this specific crop.

SEMINIS VEGETABLE SEEDS, INC. DOES NOT WARRANT THE ACCURACY OF ANY INFORMATION OR TECHNICAL ADVICE PROVIDED HEREIN AND DISCLAIMS ALL LIABILITY FOR ANY CLAIM INVOLVING SUCH INFORMATION OR ADVICE. 180626072544 121318DME