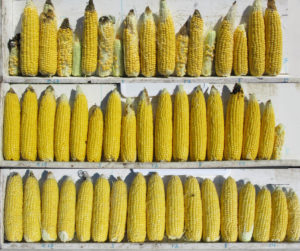 Current recommendations on sweet corn populations vary depending on the intended market (fresh market vs. processing), seasonality (early vs. mid- to late-season), and growing conditions, such as the use of irrigation, soil type, and other factors. With sweet corn grown for processing, yield is measured as amount of product (case recovery) per acre for frozen or canned cut kernel products, and as usable ears per acre for whole-ear and cobette products. Processors usually require that ears be a minimum of 8 inches long. Diameters of 1.8 to 2.0 inches are desired for whole-ear or cobette production. If only used for cut kernels, then the ear can be a larger diameter (up to 2.2 inches) with a slight taper. An ear with deep kernels or high kernel recovery is important. Some processors prefer hybrids that produce ears that are suitable for both whole-ear, cobette, and cut kernel, so ear shape, size, and kernel recovery are equally important. For fresh market sweet corn, yield is measured as the number of marketable ears per acre, but consumer preferences favor large ears (7.5 to 8.5 inches long and 1.8 to 2.0 inches in diameter) with good tip fill.

Ear size and level of tip fill tend to decrease as populations increase, so finding the optimum planting rate to provide a good balance of yield and quality can be challenging.

The Midwest Vegetable Production Guide for Commercial Growers recommends planting densities between 13,000 and 26,000 plants per acre, when planted on 30- to 40-inch rows. An in-row plant spacing of 8 to 10 inches is recommended for early-season varieties, while a range of 9 to 12 inches is recommended for mid- to late-season varieties.2 The recommendations from the Cornell and the Mid-Atlantic production guides are similar, with density ranges of 14,500 to 26,000 and 14,500 to 22,000 plants per acre, respectively, and recommended spacings of 8 to 12 inches between plants on 30- to 36-inch rows, with closer in-row spacings for early-season varieties.3,4

Recommendations from Minnesota distinguish sweet corn grown for processing and that grown for fresh market. For processing, a range of 26,000 to 27,000 plants per acre is recommended for irrigated production, and 20,000 to 24,000 for non-irrigated plantings.5 For fresh market production, a range of 20,000 to 25,000 is recommended, with higher rates and closer spacings for early-season planting. The recommendations for Florida are somewhat higher, with a range of 24,000 to 32,000 plants per acre using 30-inch rows with an in-row spacing of 6 to 8 inches.

With the continued improvement of sweet corn hybrids, studies are being conducted to determine the optimal planting densities for current uses and available varieties. The general conclusion from many of these studies is that varieties vary in their responses to increasing plant populations, and that an optimum population size for one variety may not be optimal for another. In some cases, optimum yields may be obtained at planting densities that are higher than what is currently being recommended in production guides.

A 2000 study on sweet corn grown in the Northeastern U.S. found that most of the fresh market varieties tested showed increased yields (number of marketable ears) when planted at 28,000 plants per acre, well above the 14,500 to 17,500 level recommended for the region. They did see a reduction in the number of large ears on some varieties planted at this density, but not all. They also found that optimum population levels differed by variety.6

Durgy and Boucher7 evaluated the effect of planting density on a variety that produces particularly large ears. They found that the weight and size of ears was fairly consistent at populations from 25,000 to 40,000. However, they did see some decrease in tip fill at the higher planting densities in one of the two study locations. An evaluation of population on sweet corn in the Midwest also showed an increase in the number of marketable ears with increasing plant populations, but that smaller ears and lower ear quality were often seen at the higher population levels.8

A study specifically comparing processing varieties of sweet corn for their tolerance to crowding showed that there were significant differences in the performance of currently used hybrids planted at populations of 29,000 plants per acre (Table 1). It was noted in this study that the highest performing hybrid grown at an elevated population yielded 50% more green ear mass than the lowest performing hybrid, and had 61% greater case production, resulting in a 71% higher gross profit margin. Conclusions of the study were that crowding-stress tolerant varieties were being under-planted in many situations, and that tolerance to crowding-stress is a heritable trait that can be used to increase yields of sweet corn hybrids.

There is still a lot that is not known about the impact of plant populations on sweet corn production, and effects vary with hybrid, location, growing conditions, and the intended market. However, growers should be aware that hybrids vary in their responses to increasing plant density, and that planting crowd-stress tolerant hybrids at higher populations may result in higher yields of marketable ears. 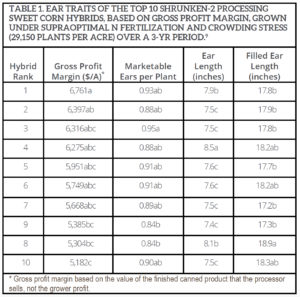 Individual results may vary, and performance may vary from location to location and from year to year. The information provided in this article may not be an indicator of results you may obtain as local growing, soil and weather conditions may vary. Growers should evaluate data from multiple locations and years whenever possible.

The recommendations in this article are based upon information obtained from the cited sources and should be used as a quick reference for information about growing sweet corn. The content of this article should not be substituted for the professional opinion of a producer, grower, agronomist, pathologist and similar professional dealing with this specific crop.

SEMINIS DOES NOT WARRANT THE ACCURACY OF ANY INFORMATION OR TECHNICAL ADVICE PROVIDED HEREIN AND DISCLAIMS ALL LIABILITY FOR ANY CLAIM INVOLVING SUCH INFORMATION OR ADVICE. 161028151122 031317DME