» Cucumber varieties are either monoecious or gynoecious in their flowering patterns.
» Gynoecious varieties produce only female flowers and have a more concentrated period of fruit production.
» There are also parthenocarpic varieties that do not need to be pollinated to produce fruit.

Cucumbers, like most cucurbit plants, produce separate male and female flowers on the same plant (Figure 1). In botanical terms, these plants are said to be monoecious (translation, one-house). On monoecious plants, the male flowers contain stamens that produce pollen, while female flowers have pistils that contain the ovule. By contrast, plants, such as tomatoes and beans, produce “perfect” flowers that have both male and female parts present in the same flower. 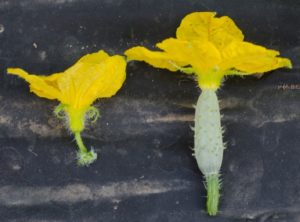 As the fertilized ovules develop, hormones are released that stimulate the division and expansion of fruit cells. The development of cucumber fruit usually depends on the presence of an adequate number of fertilized seed within the developing fruit. Without enough fertilized seed, the fruit either aborts or becomes misshapen (Figure 2).1 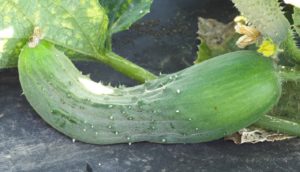 Figure 2. Inadequate pollination results in fruit abortion or the formation of misshapen fruit.

Many modern cucumber hybrids are gynoecious.2 Gynoecious varieties produce large numbers of female flowers and have a fairly concentrated flowering period. Thus, they produce a lot of fruit over a relatively short amount of time. This concentrated fruit production works well in mechanical harvest systems that harvest only once or in multi pick systems with small harvest windows or the need to rotate to another crop quickly. In contrast, the flowering periods of monoecious varieties are usually more spread-out. Over the course of the season, monoecious varieties will produce about the same number of fruit per plant, but the fruit production will occur over a longer time period and require several pickings. This extended fruiting period may work better for growers who desire sustained production over a longer period to supply sales at farmer’s markets or home gardens.

The female flowers of gynoecious varieties still need to be fertilized with pollen from male flowers, so a certain percentage of monoecious plants need to be planted along with the gynoecious plants to serve as pollenizers. Most seed companies provide cucumber seed blends that contain 85% to 90% gynoecious seed and 10% to 15% monoecious seed. These blends ensure that the optimal proportion of male to female flowers are present in a planting, resulting in good pollination levels and high fruit yields. 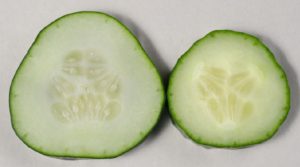 Because parthenocarpic varieties do not produce large numbers of seed, even when pollinated, the cost of seed production is high, and the seed of these varieties is typically more expensive than the seed of other varieties.4

Individual results may vary, and performance may vary from location to location and from year to year. This result may not be an indicator of results you may obtain as local growing, soil and weather conditions may vary. Growers should evaluate data from multiple locations and years whenever possible. The recommendations in this article are based upon information obtained from the cited sources and should be used as a quick reference for information about cucumber production. The content of this article should not be substituted for the professional opinion of a producer, grower, agronomist, pathologist and similar professional dealing with this specific crop.

SEMINIS DOES NOT WARRANT THE ACCURACY OF ANY INFORMATION OR TECHNICAL ADVICE PROVIDED HEREIN AND DISCLAIMS ALL LIABILITY FOR ANY CLAIM INVOLVING SUCH INFORMATION OR ADVICE. 161028154925 042717DME