» Tar spot is a new disease on sweet corn in the United States.
» Black spots form on the leaves, and death of leaf tissues reduce yield and product quality.
» Management strategies include crop residue management and crop rotation.

Tar spot of corn is caused by the fungal pathogen Phyllachora maydis. The disease is prevalent in Mexico and other Central and South American countries, as well as in the Caribbean. In the Latin American region, P. maydis and another fungus coinfect corn plants and cause the tar spot complex. 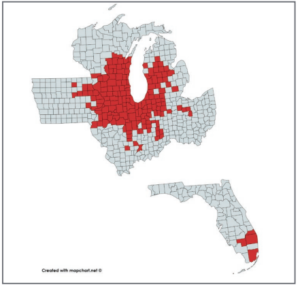 Tar spot was first identified in the United States on field corn in 2015 in northwestern Indiana and north-central Illinois, and as of 2019 the disease has been found in Florida, Illinois, Indiana, Iowa, Michigan, Ohio, and Wisconsin (Figure 1). So far, tar spot in the U. S. is only caused by P. maydis, as the other fungus causing the tar spot complex in Latin America has not been detected on symptomatic plants in the U. S.1,2

Since its introduction into the U.S., tar spot has caused substantial yield losses on field (dent) corn in some areas, and when severe, tar spot can increase the rate of stalk rot and lodging. An epidemic of tar spot in 2018 resulted in 20 to 60 bushel per acre yield losses in areas of the Midwest, and some cornfields in Indiana 100% of the corn plants showed symptoms of the disease. Tar spot was also a problem on both processing and fresh market sweet corn plantings in the 2018 epidemic, resulting in reductions of yield and product quality.1,2

The pathogen forms small (0.2 to 0.8 inch diameter), raised, black, spore-producing structures (called stroma) on the upper and lower leaf surfaces of infected corn plants (Figure 2). The stroma are usually circular but can vary in size and shape. When the disease is severe, the spots (stroma) can also form on husks and leaf sheaths.1,2 The black spots are sometimes surrounded by circular, tan to brown lesions with dark borders, referred to as “fish-eye” symptoms (Figure 3). Up to 4,000 lesions can form on a single leaf. Lesions can coalesce to form stripes on the leaves. Eventually the surrounding leaf tissue dies, sometimes affecting as much as 80% of the total leaf area (Figure 4).1,3 The disease usually spreads from lower leaves to upper leaves, and leaves can be completely killed in 21 to 30 days. 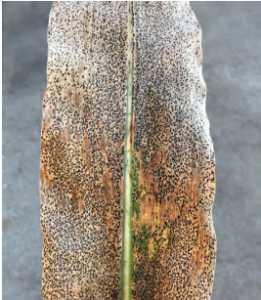 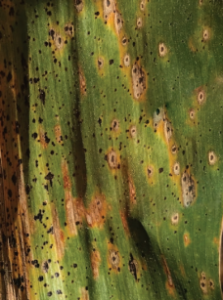 The symptoms of tar spot are somewhat similar to symptoms caused by Physoderma brown spot. However, the spots associated with tar spot are raised up from the leaf surface, and these spots form mostly from the middle of the leaf to the tip, at least initially. By contrast, the spots associated with Physoderma brown spot are embedded in the tissue, and initially form mostly near the base of the leaf.1 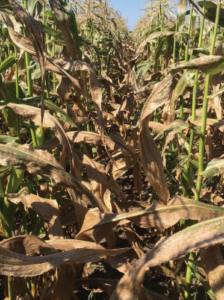 Symptoms on sweet corn are identical to the symptoms that develop on field corn. As with field corn, severe infections on sweet corn can result in the death of large amounts of leaf area. Substantial losses in both fresh market and processing sweet corn have resulted from heavy infections of tar spot. The size, shape, and uniformity of ears can be greatly affected by the loss of photosynthetic leaf area. With processing sweet corn, the uniformity of size and shape of ears is important for maximizing the recovery of kernels removed from the ear by mechanical cutters. Reduction of ear size is also a problem for fresh market sweet corn, as is the reduction of marketability from spots appearing on the husks.

Most of what we know about tar spot of corn comes from studying the disease in Latin America. It is assumed, but not proven, that the pathogen overwinters as the stroma on infested corn tissue. When conditions are favorable, spores of the pathogen form in fruiting bodies in the stroma. These spores are spread to corn plants by wind and splashing rain. In Latin America, the development of tar spot is favored by cool temperatures (60 to 70°F), high humidity levels (above 75%), and prolonged periods of leaf wetness. Disease severity increases with more than 7 hours of free moisture on the leaves.1,2,4

In the U.S., tar spot has also developed during wet but somewhat warmer weather following persistent rain and periods of high humidity.1 Continuous corn planting and minimum tillage are also associated with higher disease severity levels in Latin America. Tar spot spores are produced after rain events or periods of prolonged high humidity. Several cycles of spore production and infection are possible during the season, and spores can infect corn plants at any stage of development.1 The tar spot pathogen is not known to be seedborne or to infect any other species of plant.

Field corn hybrids vary in their susceptibility to tar spot. Therefore, one management strategy is to avoid planting susceptible field corn hybrids. At this point, not much is known about the susceptibility of sweet corn hybrids. For sweet corn, managing corn residue, and rotating to non-corn crops are the best options for management of tar spot. Disking in crop residues at the end of the season will speed up the process of decomposition of the residue and reduce inoculum levels in the field. Continuous corn production is associated with increased tar spot severity. Therefore, rotating to non-corn crops will help prevent the buildup of tar spot inoculum in the field.1,2 In regions with large acreages of field, inoculum produced on field corn residue can be carried into sweet corn plantings on air currents and wind-blown rain, reducing the effectiveness of crop rotation and residue management efforts in sweet corn fields.

Performance may vary from location to location and from year to year, as local growing, soil and weather conditions may vary. Growers should evaluate data from multiple locations and years whenever possible and should consider the impacts of these conditions on the grower’s fields. The recommendations in this article are based upon information obtained from the cited sources and should be used as a quick reference for information about sweet corn diseases. The content of this article should not be substituted for the professional opinion of a producer, grower, agronomist, pathologist and similar professional dealing with this specific crop.