»Corn plants all have the same general growth stages, but the speed of their progression through them can be affected by product and environmental differences.
» Growth stages can be used to help growers make timely applications of fertilizer, herbicides and fungicides.
» Growing degree units (GDUs) represent the daily accumulation of heat needed for corn growth and development and can be used to schedule sweet corn plantings to help plan for a steady harvest.

Corn plants all have the same general development steps; however, the time between stages and the total number of leaves on a plant can vary. For example, an early-maturing product may produce fewer leaves or develop through growth stages faster then a slower paced late-maturing product. Variation in the time of development may be due to differences in corn products, locations, planting dates, seasons, and environmental stresses. 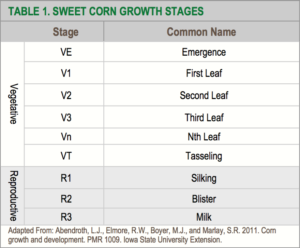 Once corn seed is planted, metabolic reactions begin to take place within the seed. The radicle begins to elongate from the seed when adequate moisture is available and soil temperatures are above 50° F. Emergence of the radicle from the seed is called germination, which may occur as quickly as 2 to 3 days after planting. Germination may take several days longer depending on soil temperature, soil moisture, surface residue, and planting depth of the seed.

When the coleoptile is exposed to sunlight at emergence, elongation of the coleoptile and mesocotyl stop. At this time, the growing point of the plant is approximately 1 to 1.5 inches below the soil surface.

VE Stage – Corn emergence occurs when the coleoptiles reach and break through the soil surface. If cool or dry conditions exist, emergence may be delayed several weeks. At the VE stage, growth is also taking place below the soil surface as the nodal root system begins to grow.

V1 Stage – The V1 stage occurs when the first leaf has fully emerged and the leaf collar is visible. The first leaf to emerge will have a rounded tip; later emerging leaves will have more pointed tips.
V2 Stage – The V2 stage is reached when 2 leaves are fully emerged with collars visible.
V3 Stage – The V3 stage marks the beginning of the photosynthetic process and the end of the seed acting as the primary food source. At the V3 stage, the plant begins to rely on the nodal root system as these roots increase in size and begin to form root hairs. Growth of the seminal root system has stopped. 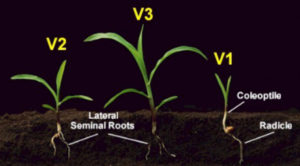 During the V10 to V17 growth stages, any management practice that helps reduce plant stress and allows for adequate nutrient levels can help maximize yield potential. The number of kernels per row is determined by V17, or approximately 1 week before silking.

Pollination in sweet corn can begin as early as 45-50 days after corn emergence in early products, and up to 9-10 weeks after emergence in full season products. Moisture and heat stress during pollination can result in barren tips or loss of entire ears, which may cause significant yield reduction.

VT Stage – Tassel stage begins when the last branch of the tassel is visible, but silks have not yet emerged (Figure 2). Tassels normally appear 2-3 days before silk emergence. Pollen shed typically occurs in the morning or evening.

R1 Stage – Silking stage begins when the silk is visible outside the husk (Figure 3). Pollen falls onto the silks to potentially fertilize the ovules. Each ovule can produce an individual kernel. Moisture stress at this time can cause the desiccation of silks and/or pollen grains, which could reduce seed set.

During the kernel filling stages, the plant now provides nutrients for reproductive growth rather than vegetative growth. While the number of kernels has already been determined in earlier stages, the size of the kernels is set during fill stages.

Sweet corn will be ready for harvest at the R3 stage, approximately 18-21 days after the initial emergence of silks depending on environmental conditions. At harvest, silks on the ear should be brown and dry (Figure 4). When a thumbnail is pressed into a kernel, a milky liquid should emerge indicating the crop is ready for harvest (Figure 5). It is very important to harvest quickly at the proper stage because the sugars in sweet corn can rapidly convert to starch, making the corn undesirable.3

The daily accumulation of heat needed for corn growth and development is represented by Growing Degree Units (GDUs). Each corn product has a certain number of GDUs needed to reach harvest maturity. GDU tracking can be used to schedule sweet corn plantings to help plan for a steady harvest.4 Growing degree day accumulation is calculated for each day throughout the growing season, starting the day after planting through harvest. The sum of daily GDUs from planting date is used to determine the accumulated total units for the growing season. The equation used to calculate GDU is: GDU = ((high °F + low °F)/2) – 50 If the low temperature is below 50° F, use 50° F in the equation. If the high temperature is above 86° F, use 86° F in the equation. Example: High of 95° F, low of 72° F. GDU = ((86+72)/2) – 50 = 29 GDU.

Individual results may vary, and performance may vary from location to location and from year to year. The information provided in this article may not be an indicator of results you may obtain as local growing, soil and weather conditions may vary. Growers should evaluate data from multiple locations and years whenever possible. ALWAYS READ AND FOLLOW PESTICIDE LABEL DIRECTIONS. The recommendations in this article are based upon information obtained from the cited sources and should be used as a quick reference for information about growing sweet corn. The content of this article should not be substituted for the professional opinion of a producer, grower, agronomist, pathologist and similar professional dealing with this specific crop.

SEMINIS DOES NOT WARRANT THE ACCURACY OF ANY INFORMATION OR TECHNICAL ADVICE PROVIDED HEREIN AND DISCLAIMS ALL LIABILITY FOR ANY CLAIM INVOLVING SUCH INFORMATION OR ADVICE. 150501130356  051515JMG