This disease is caused by the fungus Exserohilum turcicum. NCLB development is favored by moderate temperatures between 65 to 77o F, high relative humidity, and heavy dew events. Hence, NCLB is one of the primary foliar diseases of spring crops of sweet corn grown in Florida and mid-to-late summer crops in the Midwest and Northeast.

Symptoms.
NCLB disease attacks the foliage and can occasionally attack husk leaves covering sweet corn ears. Lesions appear on the lower leaves first and progress upward to the newly emerged leaves at the top of the sweet corn plant. Lesions are long (up to 6 inches) and generally cigar-shaped (Figure 1).1 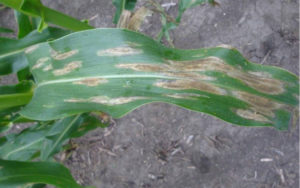 Lesions are initially silver-gray in color and have a water-soaked appearance. They become tan and necrotic as they mature, often with darkened areas where the fungus is sporulating. Lesions often form in bands across leaves as a result of infection in the whorl prior to tasseling.

Management Options.1
»Bury infected debris through deep plowing.
»Select resistant sweet corn products.
»Applying strobilurin-and sterol-inhibiting fungicides as preventive measure can be a very effective control, if applied prior to when a substantial amount of the leaf area is symptomatic.

This disease is caused by the fungus Bipolaris maydis. Compared to NCLB, it develops at warmer temperatures, between 68 to 90o F, and under damp conditions.1Consequently, SCLB typically is a common disease of fall crops of sweet corn in Georgia and Florida.

Symptoms.
Foliage symptoms include small elongated, (up to 1-inch long), yellow to tan parallel-sided lesions bordered by yellow to green or yellow halos. Symptoms can vary considerably on different sweet corn (Figure 2). If a sweet corn product is susceptible, damage can be severe when young plants are infected. 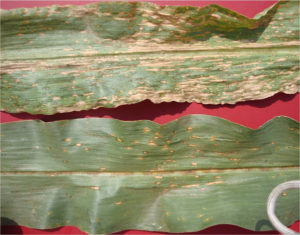 Management Options.
»Bury infected debris through deep plowing.
»Select resistant sweet corn products.
»Applying strobilurin -and sterol-inhibiting fungicides can be a very effective control measure, if applied prior to when a substantial amount of the leaf area is symptomatic.

This disease is caused by the fungus Puccinia sorghi. The fungus is favored by moderate to cool temperatures (60 to 78o F) and high relative humidity. 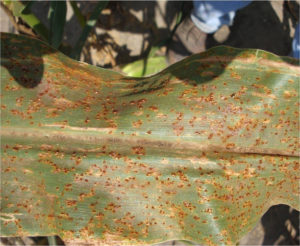 Seminis sweet corn products may have one or more of many different resistance genes that prevent formation of common rust pustules, thus effectively controlling the disease. However, many different races of the rust fungus occur. The effectiveness of rust resistance depends on the races of rust present in a particular location.

Management Options.
» Use resistant/tolerant sweet corn products.2 Many sweet corn products have Resistance to Puccinia (Rp) gene that provides nearly complete control – chlorotic fleck reactions – across several prevalent races of common rust.
» Applying strobilurin-and sterol-inhibiting fungicides as preventive measure can be a very effective control measure, if applied prior to when a substantial amount of the leaf area is symptomatic.

This disease, which is caused by the fungus Puccinia polysora, is similar to common rust in sweet corn but can cause more damage.1 Favorable conditions for the fungus are warm temperatures and high relative humidity. These conditions can make the disease more prevalent in the summer and early fall. 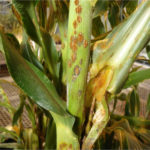 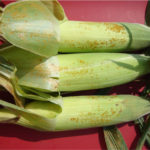 The four major diseases covered in this publication can cause significant losses to sweet corn yield potential. The severity of any disease depends on the presence of the pathogen, favorable weather, and susceptibility of the sweet corn products.

Planting sweet corn products resistant to these diseases is one of the most effective control strategies. 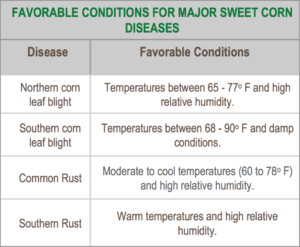 Individual results may vary, and performance may vary from location to location and from year to year. The information provided in this article may not be an indicator of results you may obtain as local growing, soil and weather conditions may vary. Growers should evaluate data from multiple locations and years whenever possible. ALWAYS READ AND FOLLOW PESTICIDE LABEL DIRECTIONS. The recommendations in this article are based upon information obtained from the cited sources and should be used as a quick reference for information about growing sweet corn.  The content of this article should not be substituted for the professional opinion of a producer, grower, agronomist, pathologist and similar professional dealing with this specific crop.

SEMINIS DOES NOT WARRANT THE ACCURACY OF ANY INFORMATION OR TECHNICAL ADVICE PROVIDED HEREIN AND DISCLAIMS ALL LIABILITY FOR ANY CLAIM INVOLVING SUCH INFORMATION OR ADVICE. 150501131204 051515SMK