» Sucking insects can stunt growth and reduce the yield and fruit quality of peppers.
» Aphids, stink bugs, psyllids, and white flies are important sucking insect pests on peppers.
» These insects also serve as vectors of viral diseases of pepper.

Insects can be categorized as those with chewing mouthparts and those with sucking mouth parts, including aphids, whiteflies, psyllids, and stink bugs. Sucking insects that feed on plants suck out the sap and other fluids that the plant needs to function properly. They may inject toxins while feeding, causing further damage. Sucking insects also can vector a number of important plant pathogens, spreading diseases from plant to plant as they feed.

Several species of aphids can be found on pepper plants, but not all of them cause significant problems. The green peach aphid causes the most problems on peppers.1,2 They are found mostly on the undersides of leaves, on terminal buds, and around flowers. Damage is usually greatest during periods of warm, dry weather, and populations typically decline after a heavy rainfall.

Plant death from aphid feeding is rare, but feeding can result in the shedding of blossoms and curling and stunting of new growth. Aphids produce a sticky honeydew that is difficult to remove from the fruit. The honeydew also allows sooty mold fungi to grow, covering leaves and fruit with dark mold growth that reduces photosynthesis and lowers fruit quality.2,3,4 Aphids also vector several important viruses on pepper, including Cucumber mosaic virus, Potato virus Y, Tobacco etch virus, and Beet western yellows virus.4

Sanitation through the destruction of crop debris quickly after harvest and controlling weeds in and around the field helps keep populations low and eliminate virus hosts.1,4,5 If infestations become significant, insecticide applications may be warranted. However, the use of insecticides can result in an increase in aphid populations because they lower populations of natural enemies in the planting.2,3

Several insecticides are available for controlling or suppressing aphids (Table 1), and they vary in how they can be applied (soil vs. foliar), their pre-harvest intervals (PHI) and restricted entry interval (REI), and other characteristics.

Coverage by the insecticide needs to include the undersides of leaves where the aphids typically feed.3 The development of insecticide resistant populations of aphids is a concern, so it is best to mix or alternate applications of insecticides belonging to different mode of action groups.

Stink bugs are shield-shaped insects, 1/2 to 3/4 inches long, that can be significant pests on peppers. Green, brown, and more recently brown marmorated stink bugs (BMSB) are the most common stink bugs on peppers.3 They feed on a wide range of hosts, with the BMSB causing damage on hosts ranging from apples and blackberries to corn and soybeans.6 These insects overwinter as adults in ditch banks, in fence rows, and in wooded areas. They are usually most damaging during dry periods when temperatures rise above 70°F, and populations tend to decline during periods of heavy rainfall.3

Symptoms of stink bug feeding include malformation of developing fruit, small dimpled green areas on the fruit, or “cloudy spots” on the fruit where the cells below the surface shrivel, and the area becomes white and spongy.

Scout for stink bug adults on the edges of the field, especially near wooded areas, and begin treating when adults are detected. Control weeds in and around the field to lower stink bug populations. The number of available insecticides that provide good control of stink bugs is somewhat limited, but the occurrence of resistant populations is not common.1

The tomato (potato) psyllid can be a problem for peppers in western growing regions of the U.S. Psyllids are small (1/8 inch long) and resemble tiny cicadas. The tomato psyllid has a wide host range, and its populations can increase rapidly. When they feed, psyllids inject a toxin into the tissue. Feeding can kill young transplants if populations are large, and symptoms on older plants include stunting, chlorosis, and curling of the leaves, a condition known as psyllid yellows. Feeding may result in no fruit or the formation of many undersized fruit. Psyllids also produce a white powdery honeydew that promotes the growth of sooty mold fungi that inhibits photosynthesis and reduces fruit quality.5

Monitor plants for symptoms and use sticky traps to detect psyllids. A recommended treatment threshold is 5 psyllids per plant. An application of imidacloprid applied at planting can keep psyllid populations low if the insects are present. If multiple applications are needed, applications should alternate among insecticides from different groups to prevent the development of insecticide-resistant populations.5

Several species of whiteflies can be found on peppers, but only silverleaf whiteflies and greenhouse whiteflies cause significant damage. These insects are very small (3/50 inch long), yellowish in color with white wings. They have a wide host range, including crops such as melons, cole crops, and cotton. They are found mostly on the undersides of leaves and readily fly when disturbed. Whiteflies suck large amounts of sap from leaves and cover them with honeydew that promotes the growth of sooty mold fungi. High populations stunt plant growth and reduce yields.5

The presence of whiteflies can be inconsistent from season to season. Using practices that conserve natural enemies, quickly destroying crop residues after harvest, and managing host weed species in and around fields can all help to keep populations low. Monitor field margins for whiteflies, especially when nearby host plants are declining. Insecticide applications should cover the undersides of leaves to be most effective. 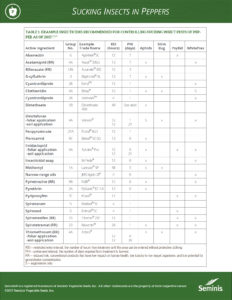 Table 1. Example insecticides recommended for controlling sucking insect pests of pepper as of 2017.1,5,7

Individual results may vary, and performance may vary from location to location and from year to year. The information provided in this communication may not be an indicator of results you may obtain as local growing, soil and weather conditions may vary. Growers should evaluate data from multiple locations and years whenever possible. ALWAYS READ AND FOLLOW PESTICIDE LABEL DIRECTIONS. The recommendations in this article are based upon information obtained from the cited sources and should be used as a quick reference for information about insect pests of pepper. The content of this article should not be substituted for the professional opinion of a producer, grower, agronomist, pathologist and similar professional dealing with this specific crop.

SEMINIS DOES NOT WARRANT THE ACCURACY OF ANY INFORMATION OR TECHNICAL ADVICE PROVIDED HEREIN AND DISCLAIMS ALL LIABILITY FOR ANY CLAIM INVOLVING SUCH INFORMATION OR ADVICE. 161028154431 022217DME