» Squash leaf curl virus can cause severe yield losses on squash and watermelon.
» Disease severity is highly correlated with the presence and activity of the sweetpotato and silverleaf whiteflies.
» Management strategies for squash leaf curl focus on preventing the infection of young plants.

The disease, squash leaf curl, is caused by the Squash leaf curl virus (SLCV). The disease was first observed on winter and summer squash plants in the southern U. S. and northern Mexico in 1977 and 1978.1,2 The Squash leaf curl virus is able to infect mostly hosts in the Cucurbitaceae, including watermelon, melon, cucumber, pumpkin (Cucurbita maxima and C. moschata), and squashes (C. pepo). The most severe losses from squash leaf curl occur in squash, pumpkin, and watermelon.2,3 Losses in cucumber and melon are usually minor. SLCV has also been shown to infect green bean and tobacco plants, but so far only under experimental conditions after inoculation.

There is a complex of SLCV strains, which are differentiated by their biological properties including host range and ability to be mechanically transmitted.1 SLCV-E and SLCV-CA occur in the southwestern U. S. (Arizona, California, and Texas), northern Mexico (Sonora), and Central America (Costa Rica, Dominican Republic, Guatemala, Honduras, and Nicaragua). These viruses are also found in the Middle East (Israel, Jordan, Lebanon, Saudi Arabia, Egypt) and Taiwan.2

Symptoms of squash leaf curl vary somewhat with the host species and the developmental stage of the plant at the time of infection. Severe losses can occur when plants are infected when young, especially in the seedling stage. Infection of older plants later in the season may not have a noticeable impact on yield.1,3 Initial symptoms usually appear 6 to 12 days after the plant is infected. General symptoms include severe plant stunting and upward curling of the leaves (Figure 1). On watermelon, pumpkin, and squash a chlorotic mosaic or mottling of the leaves can develop.2 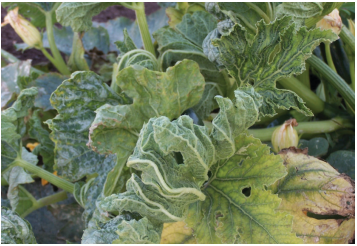 Figure 1. Upward curling of the leaves is a common symptom of SLCV infection of squash, pumpkin, and watermelon.

Plants that are infected when young remain stunted and stop producing leaves (Figure 2). Flowers drop after they are formed, and setting of fruit is rare. Fruit that do set may be small, not develop to maturity, and may be discolored, misshapen, and bumpy.1 Vein swelling (Figure 3) in the leaves may occur, and growths call enations may develop on the undersides of leaves. 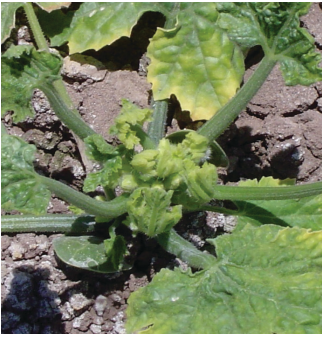 On watermelon, SLCV infection causes severe crumpling and yellow mottling of leaves. Early infections usually result in stunted plants with curled, mottled leaves and low fruit set. Later infected plants can be stunted and show some upward curling and crumpling of the leaves. Fruit that was set before the plant was infected may be marketable; however, fruit set after infection is usually not.1 Symptoms on cucumber and melon are usually mild if present at all. Some varieties of melon are more susceptible, and some leaf curling may occur. 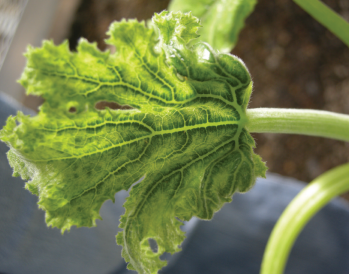 SLCV survives in infected cucurbit crops and cucurbit weed plants. The virus is transmitted from plant to plant by the sweetpotato whitefly (Bemisia tabaci) and the silverleaf whitefly (B. tabaci, biotype B). No seed transmission has been detected for SCLV on cucurbits.1

Host resistance to SLCV has been identified in cucumber, melon, squash, and for some strains of the virus in watermelon. This resistance has not been widely incorporated into commercial varieties.1 However, zucchini varieties with intermediate levels of resistance to SLCV are available.

Planting transplants rather than direct-seeding usually results in lower yield losses because plants tend to be older at the time of infection.3 Growers should plant only virus-free and whitefly-free transplants, and locally produced transplant are usually preferred.1,2 Avoid planting new crops near or downwind from established fields of cucurbit crops showing symptoms of squash leaf curl or infested with whiteflies. Controlling cucurbitous weeds in and around the crop will remove reservoir hosts for SLCV and whiteflies.

Whiteflies can also be eliminated or excluded by chemical and physical methods. Systemic insecticides can be applied to seedlings at or prior to transplanting. Insecticides can also be applied during the growing season to help keep whitefly populations low.1 Insecticides are beneficial to control the whitefly; however, an overall integrated pest management (IPM) program approach should be implemented to achieve optimal whitefly control with minimal damage to beneficial insect populations. Row covers and reflective mulches can be used to protect plants from whiteflies early in the season. Row covers need to be removed when the plants begin to flower to allow for pollination by insects (bees). Reflective mulches are only effective until the vines start to run and cover the mulch surface.

Removing (roguing-out) seedlings showing symptoms of SLCV infection within 30 days after transplanting or direct seeding can reduce the spread of the virus within the planting. Destroying the crop promptly after the final harvest will also eliminate a source of virus and whiteflies for other cucurbit crops in the area. Establishing an area-wide cucurbit free period of two to three months can help reduce the amount of virus inoculum in the area and lower whitefly populations. The virus can remain viable in the whitefly vector for up to three weeks in the absence of susceptible host plants.1,3

Performance may vary from location to location and from year to year, as local growing, soil and weather conditions may vary. Growers should evaluate data from multiple locations and years whenever possible and should consider the impacts of these conditions on the grower’sfields. The recommendations in this article are based upon information obtained from the cited sources and should be used as a quick reference for information about squash diseases. The content of this article should not be substituted for the professional opinion of a producer, grower, agronomist, pathologist and similar professional dealing with this specific crop.

SEMINIS VEGETABLE SEEDS, INC. DOES NOT WARRANT THE ACCURACY OF ANY INFORMATION OR TECHNICAL ADVICE PROVIDED HEREIN AND DISCLAIMS ALL LIABILITY FOR ANY CLAIM INVOLVING SUCH INFORMATION OR ADVICE. 180626095946 020619DME

Seminis® is a registered trademark of Bayer Group. All other trademarks are property of their respective owners.