» Sweet corn sweetness types are grown for various uses and markets.
» There are many ear and plant characteristics to consider when selecting varieties.
» Disease resistance can be used to manage some important diseases.

In the past, there was one basic type of sweet corn with the sweetness characteristic conferred by the sugary (su) gene. Over the past 50 years, other types of sweet corn have been developed with the discovery of the sugary enhanced (se) and supersweet (sh2, or shrunken-2) traits, and most recently combinations of these traits have resulted in the synergistic and improved supersweet types (Table 1).1,2 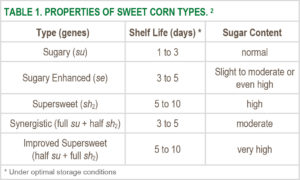 Standard sugary types, which have relatively low sugar levels and short shelf lives, are mostly grown for processing. Sugary enhanced sweet corn lines are known for their creamy texture and elevated sugar levels. The shelf life of SE sweet corn is longer than that of the sugary types but still relatively short. These se types of sweet corn are grown mostly for direct, local retail sales and wholesale markets. The supersweet (sh2) types usually are not as tender as the su and se types, but they have a much higher sugar content and a much longer shelf life. As a result, the supersweet types are grown for local fresh markets and for wholesale shipping.3 The synergistic and improved supersweet types combine the high sugar levels and long shelf life traits of the supersweet corns with the tender seed coat and creamy texture traits of the sugary and sugary enhanced types.

Seed color can be yellow, white, or bicolor (a combination of yellow and white, usually in a 2:1 ratio of yellow and white kernels). Almost all sweet corn grown for processing is of the yellow type, although some white corn is processed. Yellow sweet corn also dominates the fresh market and shipping segments. However, there are regional preferences. Bicolor types are preferred in some areas of the northeastern, southeastern, and midwestern U. S., and white varieties tend to be preferred in California and the Mid-Atlantic region of the U. S. Seed color can also vary in shade and brightness among varieties. For yellow corn, a bright, glossy color is usually preferred.4,5

In addition to seed color, there are a number of ear and kernel traits that vary among varieties, and different traits may be required for fresh market and processing uses. For fresh market corn, the appearance of the ear is important. Factors such as the number of kernel rows, the straightness of the rows, the length and shape of the ear, and the appearance of the husk all make an impression on the consumer. Flavor, texture, size, and tenderness of the kernels can also vary and be a factor in consumer preferences for specific varieties.5,6

Husks that completely cover the ear at maturity are preferred for both fresh market and processing, as they help protect the ear from bird and insect damage. For fresh market corn, dark green husks with long, attractive flag leaves at the tip of the ear are preferred by customers.

There are characteristics of the plant that are important to the grower. One of the most important factors to consider is the desired maturity, or days to harvest, rating. In areas where locally produced, early season sweet corn allows for a premium price, early maturing varieties offer a distinct economic advantage for the first plantings of the season. In some areas, varieties are classified as early-, mid-, or late season, depending on their days to maturity ratings.4,6

Ear height and ease of snap (removal of the ear from the stalk) are important characteristics in evaluating the ease of harvest. This is especially important for hand harvesting operations, but ease of mechanical harvest is also a factor considered by processors when choosing varieties.

Stand establishment, seedling vigor, and seedling uniformity impact the level of production in a planting. This is especially important for the supersweet (sh2) varieties because of their lower seed viability rates. Improved methods of seed production of the supersweet types have greatly improved the germination rates and stand establishment levels of these types. It is recommended that supersweet varieties not be planted until soil temperatures are above 60°F to ensure adequate germination rates.7

The yield potential of a variety is obviously a primary concern for growers. However, overall ears per acre (for fresh market) or tons per acre (processing) does not tell the whole story. For fresh market corn, the number and size of marketable ears is more important than the total number of ears harvested. Some high yielding varieties also produce a large number of non-marketable ears, reducing the amount of salable product. For processing, a number of yield factors are considered including the green weight (weight of the ear in husk), the yellow weight (weight of husked ears), the cut corn weight (cut but unwashed kernels), and the recovery (% of cut corn per green weight).5

For processing, ear shape and size is also important. Processors must select a variety with an ear conformation that maximizes recovery and reduces kernel waste. In addition, the depth, width, and color of kernels are characteristics important to processors. Deeper kernels allow for more efficient removal from the cob, resulting in higher recovery rates with lower amounts of kernel damage.

Planting varieties with resistance to locally prevalent diseases can help protect a planting from disease related yield losses. There are several important diseases of sweet corn, including those caused by fungi, bacteria, and viruses, that can be managed with the use of resistant varieties.

Common rust is caused by a fungus that attacks the leaves of the plant, reducing the photosynthetic area used to produce the food needed to fill the ears. Two types of resistance are available for common rust, general (or partial) resistance, which reduces the number of infections per plant and slows the spread of the disease, and specific (Rp) resistance, which confers high resistance to certain races of the pathogen. Sweet corn varieties containing one or more Rp genes are available. The most resistant varieties are those that have a combination of both general and specific resistance genes.5,8  Southern rust is another rust disease of sweet corn that can be confused with common rust, and as the name suggests, is more common in the southern U. S.

Figure 1. Lesions of (a) northern and (b) southern corn leaf blights.

Common smut causes large growths, called galls, to form on ears, leaves, and tassels. The galls that form on the ears are the most damaging in that a single gall will make an ear unmarketable. So far, resistance to common smut is all of the general (partial) type, and resistant varieties develop fewer galls than do the more susceptible types.

Stewart’s wilt is caused by a bacterium that overwinters in and is vectored by the corn flea beetle. The bacterium enters the water-conducting tissues of the plant when beetles feed, causing both seedling wilt and leaf blight symptoms. Plants infected in the seedling stage can be killed. Stewart’s wilt resistant hybrids are widely available.5,8

Maize dwarf mosaic, caused by several related viruses, is generally the most important of the viral diseases of sweet corn. The viruses are vectored by aphids, and the viruses spread systemically within the plant after infection. Infected plants are stunted and show a mottling of the leaves. Early infections result in poor ear development, significantly affecting yield level and quality. Resistance genes have been identified and are used to create varieties with resistance to the various viruses that cause this disease.8

Individual results may vary, and performance may vary from location to location and from year to year. The information provided in this article may not be an indicator of results you may obtain as local growing, soil and weather conditions may vary. Growers should evaluate data from multiple locations and years whenever possible.

The recommendations in this article are based upon information obtained from the cited sources and should be used as a quick reference for information about growing sweet corn.content of this article should not be substituted for the professional opinion of a producer, grower, agronomist, pathologist and similar professional dealing with this specific crop.

SEMINIS DOES NOT WARRANT THE ACCURACY OF ANY INFORMATION OR TECHNICAL ADVICE PROVIDED HEREIN AND DISCLAIMS ALL LIABILITY FOR ANY CLAIM INVOLVING SUCH INFORMATION OR ADVICE. 160309132932 032216DME