Seedling And Root Diseases Of Beans

Seedling And Root Diseases Of Beans

Seedling blights, damping-off, and root rots are caused by a number of pathogens including Aphanomyces euteiches and several species of Pythium (fungal-like water molds), the fungal pathogens Rhizoctonia solani and Fusarium solani f. sp. phaseoli, and several species of root knot nematode. These pathogens reside in the soil and are spread by anything that moves soil, including equipment, animals, and water flowing through infested fields.

Several species of Pythium cause seed rots, pre- and post-emergence damping-off, stem and root rots, and even some pod rots. Losses can be as high as 100% when the disease is severe.2 Infections of root systems cause slightly sunken, tan lesions that coalesce. Both primary and secondary roots are affected, resulting in a wet, soft rot of large portions of the root system. Seedlings become stunted, wilt, and may eventually “damp-off” (Figure 1).2 Under certain conditions, Pythium can splash up into the canopy and infect pods, resulting in lesions that start at the tips of the pods and progress towards the stem end.3,4 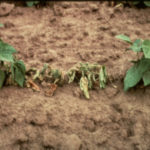 Pythium belongs to the water mold group of fungal-like organisms that thrive in wet conditions. So Pythium diseases typically occur following periods of high soil moisture. Some species of Pythium are favored by cool temperatures, while others do best in warm conditions.

Resistance is available in beans, but it is currently used in only a few commercial cultivars. To control this disease, plant beans in fields with well drained soils, use wide spacings between plants, and avoid over-irrigating during the seedling stage. Seed treatments and/or pre-plant (in furrow) soil treatments with fungicides containing mefenoxam can be effective.5 Avoid planting in fields with a history of the disease. Crop rotations with cereal crops can help prevent a buildup of the pathogens.2

Like Pythium, Aphanomyces belongs to the water mold group of organisms that thrive in wet conditions. Infection can occur at any time during the growing season, often just after seedling emergence. The disease can develop over a wide range of temperatures but does best between 68 and 82 °F. Saturated soils predispose roots to infection and are needed for the swimming spores of the pathogen to move to plant roots. The disease is most severe in locations with poor soil drainage, compacted soils, high clay content, or that receive excessive irrigation. Once in a soil, spores of the pathogen can remain viable for up to ten years.5

The initial symptoms of Aphanomyces root rot are gray, water-soaked roots that become soft and brown to back. Root systems become small and non-functional, resulting in wilting, chlorosis, and necrosis of above ground plant parts. Infected root systems have reduced levels of Rhizobium root nodulation. The root lesions can extend upward onto the hypocotyls (lower stems). Seedlings become stunted and less competitive, but rarely die (damp-off).5 The most severe symptoms are seen when dry conditions occur after a wet period that is conducive for infection.

Good resistance is available for Aphanomyces root rot in commercial bean cultivars, and resistance is one of the best methods for managing this disease. Management strategies should also include avoiding heavily infested fields, and practices that promote good soil drainage. Crop rotation and the use of fungicides have not been very effective. However, the use of cover crops, particularly cruciferous species (e.g. mustard and radish) have been shown to help control Aphanomyces root rot.5

The fungus Rhizoctonia solani can also attack bean plants at any time during the growing season. However, it is most important as a seed decay and seedling damping-off pathogen. Infection by R. solani results in sunken, reddish colored lesions on the lower stems and tap roots of older plants (Figure 2). These lesions can girdle roots and stems, killing roots and weakening plants.3,4 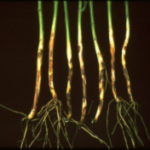 Rhizoctonia root rot is most severe at temperatures between 60 and 65 °F, with the size and number of lesions reduced above 70 °F. Soil moisture levels have little effect on disease development. However, the disease is more severe in areas with compacted soils. Plants are most susceptible in the seedling stages, and infections on plants more than four-weeks old usually have little impact on yield.2

Seed treatment and soil applied fungicides containing azoxystrobin, PCNB, or fludioxonil can be used to manage Rhizoctonia root rot.4 Cultural practices that encourage rapid emergence, such as planting in warm soils and shallow planting, can be used to reduce disease severity.

Symptoms of Fusarium root rot include reddish lesions on the tap root and lower stem that can enlarge and coalesce to rot the entire root system (Figure 3).1 Plants become stunted, and plant death can occur. However, adventitious roots can form above the lesions, keeping plants alive.

Fusarium root rot is favored by warm (72 to 90 °F), wet conditions and acidic soils. Compacted soils and infection by Pythium or nematodes can increase disease severity.1

Root knot of beans is caused by several species of the root knot nematode. Meloidogyne hapla is found in colder regions of the U. S. and other Meloidogyne species predominate in warmer areas. The disease is more common in the southern parts of the U. S. than it is in the north. Severe infections can result in yield losses of up to 90%. The disease is most severe in sandy, well-drained soils at temperatures between 77 and 86 °F.1

Infected roots become swollen as root galls up to ½ inch in diameter develop on both primary and secondary roots (Figure 4). Roots are shortened and thickened, and the over all root system size is reduced. Above ground symptoms include yellowing, stunting, and wilting of stems and leaves.2,6

Rotation with cereal crops, deep plowing, and soil flooding can help lower inoculum levels of the nematode.2 High levels of resistance to root knot are not available in commercial snap bean varieties; however some varieties are reported to have low levels of resistance. Fumigant and non-fumigant nematicides can be used to lower nematode levels, but the use of these products may not be economically justified, and environmental and worker safety factors need to be considered.6

Individual results may vary, and performance may vary from location to location and from year to year. This result may not be an indicator of results you may obtain as local growing, soil and weather conditions may vary. Growers should evaluate data from multiple locations and years whenever possible. ALWAYS READ AND FOLLOW PESTICIDE LABEL DIRECTIONS. The recommendations in this article are based upon information obtained from the cited sources and should be used as a quick reference for information about bean diseases. The content of this article should not be substituted for the professional opinion of a producer, grower, agronomist, pathologist and similar professional dealing with this specific crop.

SEMINIS DOES NOT WARRANT THE ACCURACY OF ANY INFORMATION OR TECHNICAL ADVICE PROVIDED HEREIN AND DISCLAIMS ALL LIABILITY FOR ANY CLAIM INVOLVING SUCH INFORMATION OR ADVICE. 160727161415 090916DME