Root And Stem Diseases Of Onions

Root And Stem Diseases Of Onions

Diseases affecting the roots and stems of onions can significantly impact the yield, quality, and storability of onion bulbs, and because the pathogens are present in the soil, these diseases can be difficult to control. The pathogens infect through the plant’s roots or basal stem plate. As a result, the first observed symptoms of disease are usually on the leaves, developing because of the plants reduced ability to translocate water and nutrients from the soil to the leaves. However, the foliar symptoms are not distinct enough to allow for a specific diagnosis. Root systems and bulb tissues need to be evaluated to accurately determine the cause of the problem. The loss of root and stem functionality and the subsequent loss of photosynthetic area from declining leaves combine to reduce the size and quality of the developing bulbs, sometimes leading to rotting of bulb tissues. This article focuses on two important soilborne diseases, Fusarium basal rot and pink root, which are both caused by fungal pathogens. Once established in a soil, the pathogens persist for many years, and they are disseminated within and between fields by anything that moves soil, such as equipment and water flowing over soil surfaces. These pathogens can also be introduced to fields on infested onion sets or garlic bulbs. Seed treatments are always recommended to protect seedlings from infection at the early stages of development.

The initial above–ground symptoms of Fusarium basal rot include a yellowing and curling of the older leaves, beginning at the leaf tips. The yellowing turns into necrosis, and eventually the entire leaf withers and decays. Inspection of the root system reveals roots that are dark brown and somewhat transparent. The fungal pathogen colonizes the basal stem plate, causing the outermost areas to become discolored and then rotten. The rot can progress from the stem plate into the fleshy scale [Figure 1].1 Infected bulbs may not show obvious evidence of decay at harvest, but they can start to rot in storage.2 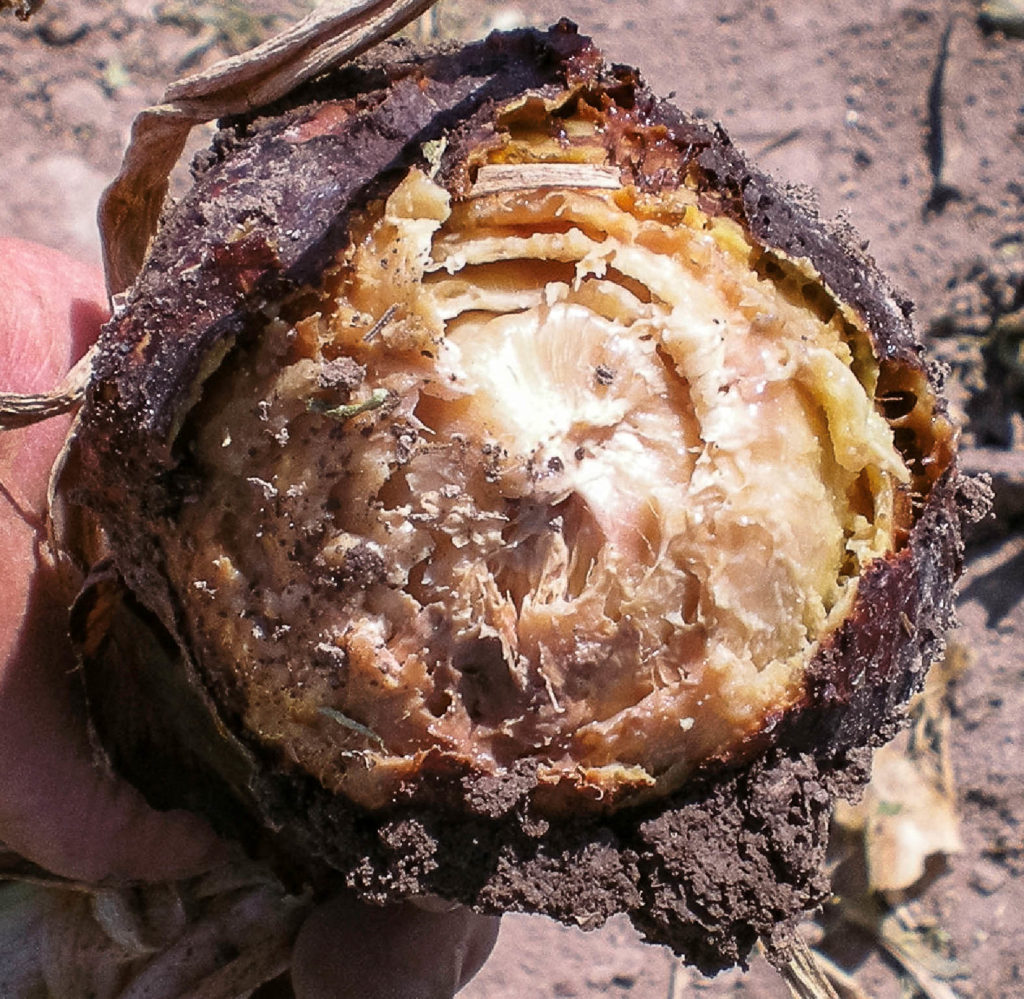 As with Fusarium basal rot, the first observed symptoms of pink root are usually on the leaves. Infected plants appear to be suffering from nutrient deficiencies and/or water stress, which is due to the limited and poorly functioning root system. Leaves turn white, yellow, or brown, starting at the tips, and these leaves eventually die. The infected plants are easily uprooted, and the roots show a pink discoloration (Figure 2). The pink color is initially light in intensity, but the color deepens to dark pink to red with time. In acidic soils, the infected roots may turn yellow.3 Eventually, infected roots become purple-brown in color, shriveled, and decayed. Infected plants are stunted, and their bulbs are usually undersized, especially if the plants are infected at an early stage. However, the fungus does not colonize the stem or bulb tissues. Plants infected as seedlings may be killed.1 Symptoms are more severe during periods of high soil temperatures and on plants subjected to moisture stress. 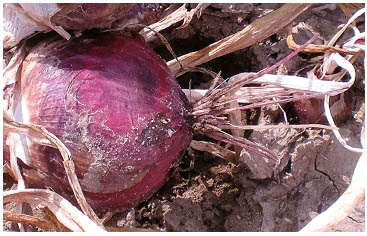 Both the Fusarium basal rot and pink root pathogens can remain viable in the soil, infested root tissues, and other forms of plant debris for several years, even in the absence of onion and other susceptible host crops. However, the continuous cropping of onions and related crops can result in severe epidemics of these diseases as pathogen populations increase. Both diseases are also favored by warm soil temperatures. The optimal temperature for Fusarium basal rot is 80°F, with little disease development at temperatures below 59°F. The optimal temperatures for the development of pink root are between 75° and 80°F, with little development below 60°F. 1

The Fusarium basal rot pathogen can infect intact onion tissues directly, but infections are more severe on plants injured by soil insect pests, such as onion and seed corn maggots. Improper fertilizer applications or mechanical damage during field operations can also predispose plants to infection. Pink root is more severe on plants suffering from nutrient deficiencies or stressed from excessive heat or drought. 2

Resistant onion varieties are available for managing both Fusarium basal rot and pink root. With Fusarium basal rot, fungal growth may still be observed on roots and stems, but the disease typically does not progress, as it does on susceptible varieties. The expression of resistance by the plants occurs after the initial colonization of the stem plate by the pathogen.1 High levels of resistance are available to control pink root. Good irrigation management and cultural practices can limit the damage caused by these diseases.

In locations where either of these pathogens have become established, long term (four to six year) rotations away from onions and related crops can help prevent the buildup of inoculum in the soil. However, even long term rotations are unlikely to result in a complete elimination of the pathogens in the soil. Healthy onion sets should be used to help prevent the introduction of the pathogen and to limit the incidence of disease.

Soil fumigation with fumigants, such as metam sodium, chloropicrin, and 1,3-D dichloropropene, has been shown to reduce disease incidence and increase yields in locations with high disease pressures. Soil solarization, covering the soil with clear plastic during the hottest months of the year, has also been shown to lower disease levels in areas with warm climates. 1

Individual results may vary, and performance may vary from location to location and from year to year. The information provided in this article may not be an indicator of results you may obtain as local growing, soil and weather conditions may vary. Growers should evaluate data from multiple locations and years whenever possible. ALWAYS READ AND FOLLOW PESTICIDE LABEL DIRECTIONS. The recommendations in this article are based upon information obtained from the cited sources and should be used as a quick reference for information about onion diseases. The content of this article should not be substituted for the professional opinion of a producer, grower, agronomist, pathologist and similar professional dealing with this specific crop.

SEMINIS DOES NOT WARRANT THE ACCURACY OF ANY INFORMATION OR TECHNICAL ADVICE PROVIDED HEREIN AND DISCLAIMS ALL LIABILITY FOR ANY CLAIM INVOLVING SUCH INFORMATION OR ADVICE. 160621151741 080516DME