Corn earworm, European corn borer, and fall armyworm are  economically important insect pests of sweet corn that have been managed primarily through the use of insecticides. Repeated insecticide applications for controlling these pests, not only on sweet corn but on other host species, such as field corn, cotton, and soybean, has resulted in populations of insects that are resistant to some classes of insecticides.

The pyrethroids are a group of synthetic insecticides with a mode of action similar to the pesticide pyrethrum, which is produced naturally in chrysanthemum flowers. The pyrethroid insecticides have been widely adopted for crop insect management because they have low toxicity levels to humans and other mammals, and they readily break down in the environment. These products can be harmful to beneficial insects, such as bees, and aquatic organisms, so they should be used with care, following the labeled directions.

Pyrethroids began to be used to manage insect pests of sweet corn in the 1980s, and they continue to be widely used on sweet corn today. However, insecticide resistant populations of some sweet corn pests began to be reported in the 1990s, and the trend for increased levels of resistance continues (Figure 1).1,2 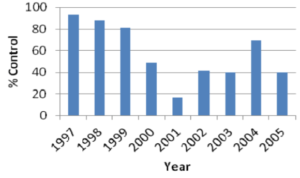 Corn earworm (CEW) is one of the most economically damaging insect pests of sweet corn. The insect overwinters in southern areas of the U.S., below the 40° latitude. The insect is a pest of corn (field and sweet), soybean, cotton, and sorghum. Adult CEW moths migrate north in the spring, laying eggs on crops. The widespread use of insecticides to manage CEW on crops in the southern regions has resulted in the development of populations that are resistant to some insecticides. The use of insecticides on crops in the northern areas has had minimal impact on the development of resistance, because the insects that develop in the north do not survive the cold winters; thus any resistant individuals are not able to pass on their traits to later generations. Some reverse migration, moths moving southward, may occur in the fall, but this probably does not have a significant impact on the development of resistance.3

Pyrethroids are the primary class of insecticides used to manage CEW on sweet corn, and many products in this class are available, including Asana® XL (esfenvalerate), TombstoneTM (cyfluthrin), Baythroid® XL (beta-cyfluthrin), Warrior II with Zeon Technology® (lambda-cyhalothrin), Mustang® Maxx® (zeta cypermethrin), and Hero® Insecticide (zeta cypermethrin and bifenthrin).4 The use of these products in the southern areas of the U.S. has resulted in the development of insecticide resistant CEW populations that migrate northward in the spring.3,4

While the pyrethroid insecticides remain mostly effective in areas such as the Midwest, there have been sporadic failures of control and decreased efficacy of applications in some locations and years4,5, and low to moderate levels of resistance have been documented in the Midwest. Increased rates of application may be needed to provide adequate control.5,6 In some areas, such as Texas, up to ten-fold increases in resistance of CEW to pyrethroid insecticides have been observed.7

The widespread use of Bt field corn hybrids has significantly reduced populations of some insect pests of sweet corn. In particular, the populations of European corn borer (ECB) throughout the U.S. are much lower than they were prior to the adoption of Bt field corn hybrids. This has reduced the impact of this pest on sweet corn production and the need to apply insecticides to manage them.6 However, resistance to the Bt toxin has been documented in ECB.8

Unlike CEW, which only overwinters in southern areas, ECB overwinters throughout the sweet corn growing regions of the country. Widespread overwintering of ECB means that selection for insecticide resistant individuals in all areas could contribute to the development of resistant populations of ECB.

As with CEW, fall armyworm (FAW) does not overwinter in northern locations. Overwintering occurs in the southern U.S., and adults migrate northward during the growing season. Therefore, the use of insecticides in the southern growing regions and the development of insecticide resistant populations there determine the levels of resistance seen in northern locations. FAW populations showing resistance to several classes of insecticides, including pyrethroids, organophosphates, and carbamates, were documented in the 1990s1, and efforts to manage and slow the development of these resistant populations are underway.

The introduction of sweet corn varieties with the Bt Cry3Bb1 trait provided a new tool for managing corn rootworm (CRW). However, the widespread use of this trait in field corn has resulted in the development of populations of western CRW that are resistant to the effects of the Cry3Bb1 protein. Performance problems of field corn with the Cry3Bb1 trait were first reported in southern Minnesota and eastern Iowa in 2009 and additional states in following years.9

In 2016, the Environmental Protection Agency (EPA) revised requirements for using Bt traits in field corn to control CRW in order to delay further development of resistant CRW.10 In areas where Bt resistant CRW have been documented, field corn seed companies are required to work with farmers to implement integrated pest management (IPM) practices, including rotations with non-CRW host crops, the use of field corn varieties with multiple (pyramided) Bt traits, and the planting of non-Bt CRW protected field corn with a soil-applied insecticide at planting. 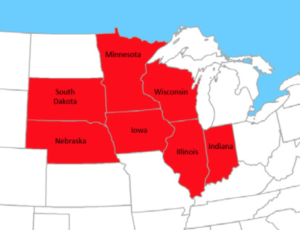 Although sweet corn growers have relied on pyrethroid insecticides for many years, new types of insecticides with different modes of action have become available, and trials have shown that these products can be used to effectively control pests such as CEW, ECB, and FAW.6,11 These insecticides include the bacterial based products Spinosad (Blackhawk®) and Spinetoram (Radiant®), and the diamide insecticides Flubendiamide (Belt® and Vetica®), chlorantraniliprole (Coragen®), and chlorantraniliprole+lambda cyhalothrin (Besiege®).

Non-pyrethroid products, such as Coragen®, Radiant® , and Blackhawk®, have been shown to provide good control of CEW in sweet corn. The rotation of applications of pyrethroid insecticides with insecticides in different mode-of-action classes can help delay the development of resistant populations of CEW, especially in the southern, overwintering regions of the country.5

IMPORTANT: Produce Marketing and Stewardship Requirements: This product has been approved for import into key export markets with functioning regulatory systems. Any crop or material produced from this product can only be exported to, or used, processed or sold in countries where all necessary regulatory approvals have been granted. It is a violation of national and international law to move material containing biotech traits across boundaries into nations where import is not permitted. It is the grower’s responsibility to talk to their produce handler or purchaser to confirm their buying position for this produce so that the marketing requirements can be met.

B.t. products may not yet be registered in all states. Check with your Monsanto representative for the registration status in your state.

All information concerning Performance Series® sweet corn hybrids given orally or in writing by Monsanto or its employees or agents, including the information in this communication, is given in good faith, but is not to be taken as a representation or warranty by Monsanto as to the performance or suitability of Performance Series® sweet corn hybrids, which may depend on local climatic conditions and other factors. Monsanto assumes no liability for any such information. This information shall not form part of any contract with Monsanto unless otherwise specified in writing.