» Protectant fungicides prevent new infections from occurring, are usually non-systemic, have multisite modes of action, and are active on a broader range of fungal pathogens.
» Systemic fungicides provide some control in the early post-infection period, can move to protect unsprayed plant tissues, often have single-site modes of action, and may have narrower spectra of activity.

Fungicides are classified based on whether or not they move through the plant after application, what groups of pathogens they control, if they have any curative activity, and by what mode of action they inhibit the pathogen, indicated by their FRAC group. Fungicide FRAC groups have been established by the Fungicide Resistance Action Committee to group fungicides by their modes of action and their risk for cross-resistance.1

It is common to see protectant fungicides compared to systemic fungicides. While these terms technically belong to different classification systems, the terms are useful for describing two types of fungicides with common characteristics.

However, most fungicides are not truly systemic in that they are not translocated throughout the plant. There are different degrees of systemic movement. Some products are locally systemic, meaning that they are absorbed into the plant and move only a short distance from the point of application.2 When a fungicide is able to spread from one side of a leaf (the upper leaf surface) to protect the other side of the leaf (the lower leaf surface) it has translaminar movement (Figure 1B). Xylem systemic fungicides are able to move within the leaf, usually toward the leaf tip, or move upward in the plant toward the shoot tips. They do not move downward in the plant toward the roots. Highly systemic fungicides are able to move throughout the plant from their point of application, both upward toward the shoot tips and downward toward the roots. Only a few fungicides are classified as highly systemic.2,3

Fungicides that are able to stop established infections and minimize further symptom development have “curative” activity. These fungicides can kill spores and fungal hyphae after the pathogen has penetrated the plant. This effect is also referred to as kickback or eradicant activity. Curative activity is usually limited to the early infection period of the disease, often within 24 to 72 hours of initial infection, depending on the fungicide and the rate of application.2,3 Curative fungicides are systemic fungicides by nature. The fungicides are absorbed into the plant, where they kill or inhibit the fungus and stop the infection process. Some systemic fungicides have both preventative and curative activity.2

Many curative fungicides have single-site modes of action, meaning that they act against single points of function in a metabolic pathway of a fungus. The chemical/biological bases for the modes of action are numerous and result in damage to cell membranes, inactivation of enzymes, disruption of energy production/respiration, inhibition of nucleic acid synthesis, and disruption of growth and development.2 Fungicides that have similar modes of action and belong to the same FRAC group may or may not have similar chemical structures.

Many curative fungicides have narrower spectra of activity (effective against a smaller range of pathogens), as compared to protectant fungicides. For example, phenylamide fungicides, such as metalaxyl, are used almost exclusively to manage oomycete organisms, including Pythium and Phytophthora. Single-site fungicides may be at higher risk for enhancing the development of fungicide resistance in pathogens. Resistance management programs are often recommended to prolong the effectiveness of these types of fungicides.2

Some curative fungicides also have antisporulant activity, meaning that they inhibit the ability of the fungus to produce spores. The fungal pathogen may be able to continue to grow in the plant tissue and cause symptoms. However, the fungus is not able to produce spores, which limits the ability of the pathogen to spread to other plants or other locations on the same plant.1 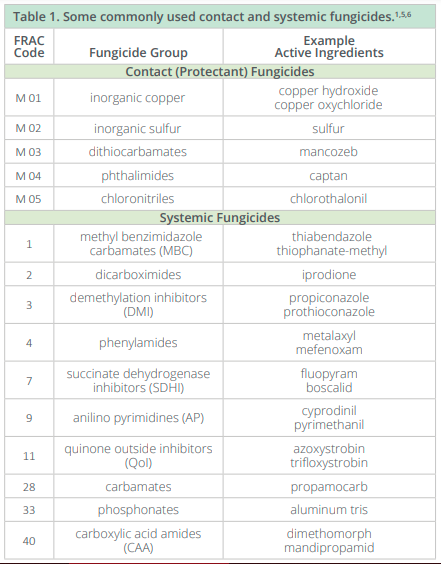 For additional agronomic information, please contact your local seed
representative.
Performance may vary from location to location and from year to year, as local growing, soil and weather conditions may vary. Growers should evaluate data from multiple locations and years whenever possible and should consider the impacts of these conditions on the grower’s fields. The recommendations in this article are based upon information obtained from the cited sources and should be used as a quick reference for information about vegetable production. The content of this article should not be substituted for the professional opinion of a producer, grower, agronomist, pathologist and similar professional dealing with vegetable crops.
BAYER GROUP DOES NOT WARRANT THE ACCURACY OF ANY INFORMATION OR TECHNICAL ADVICE PROVIDED HEREIN AND DISCLAIMS ALL LIABILITY FOR ANY CLAIM
INVOLVING SUCH INFORMATION OR ADVICE.
9050_SE_S12 Published 06/10/2021
ALWAYS READ AND FOLLOW PESTICIDE LABEL DIRECTIONS. Bayer, Bayer Cross Design, and Seminis® are registered trademarks of Bayer Group. All other trademarks are property of their respective owners. © 2021 Bayer Group. All rights reserved.