» Trellising can be an economically viable practice for cucumber production in both field and protected culture systems.
» Yields tend to be higher and disease levels tend to be lower in pole cucumbers as compared to ground-grown cucumbers.
» Hand harvesting is easier and less vine damage usually occurs during harvest with pole-grown cucumbers. This helps extend
the harvest season.

For field production, most cucumbers are grown on the ground, meaning that their vines spread across the soil or mulched bed surface without any trellising or vertical support. Pickling cucumbers for processing are always grown on the ground to allow for mechanical harvesting. Trellising systems are frequently used in greenhouse and high-tunnel production; however, many growers are starting to use various trellising (or pole) systems to produce fresh market, slicing cucumbers in the field.1

There are additional expenses associated with pole systems, including the costs of the materials used for the trellis system. The need for labor and the associated costs are also substantially higher with pole systems. In addition, pole systems often use monoecious cucumber varieties, while ground-grown systems use primarily gynoecious varieties. The seed of monoecious varieties are typically more expensive than gynoecious seed, which is an additional expense. The higher costs associated with pole systems are often offset by the increased yields seen with these systems. The yields of pole-grown cucumbers can be two to three times the yields seen with ground-grown cucumbers.2,3 Research trials have shown that both total and marketable yields increase with trellising, although the average marketable fruit weight is not usually affected.4

One reason for the higher yield is a general reduction in diseases on foliage and fruit of pole cucumbers as compared to ground-grown cucumbers.3 Trellising results in more effective disease and insect management as the vertical growth allows for better penetration of the canopy by fungicides and insecticides and for better distribution of pesticides on leaves, fruit, and stems. The increased air circulation and lower humidity levels within the canopy are also less favorable for disease development. Studies have shown lower levels of Phytophthora fruit rot on pole cucumbers as compared to ground grown cucumbers. The incidence and severity of other foliar diseases and Rhizoctonia rot have also been shown to be lower on pole cucumbers.2,5 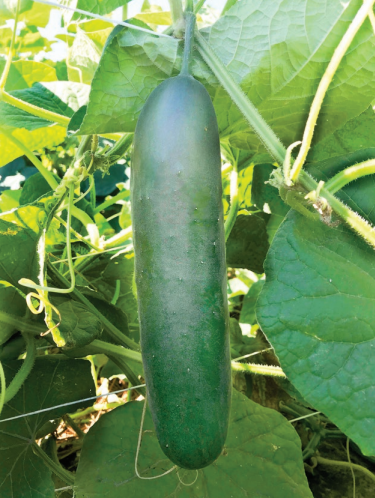 A common trellising system for field-grown cucumbers involves installing posts or poles no more than 15 feet apart along each row of cucumber plants (Figure 2). The poles are usually 6 feet high with a No. 8 wire running along the top of the poles and a No. 12 wire running along the bottom of the poles. Plastic twine or netting is tied between the two wires at each plant.1,2 The top wire can get hot when exposed to the sun, and this can burn the cucumber vines that are in contact with the wire. For this reason, some growers opt to use woven nylon mesh instead of wire to run along the tops of the poles.4 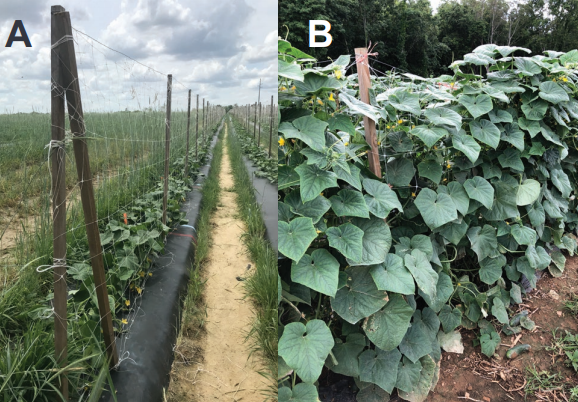 Figure 2. (A) A cucumber trellis system using a net suspended between regularly spaced poles. (B) Vines cover the trellis later in the season.

When the cucumber plants start to vine, the vines are guided to the twine or net and trained to grow onto the trellis. Clips or ties can be used to secure the vines to the support system as they grow upward. The clips and ties should be removed if they become binding on the vines.1,2 The vines can also be woven into the netting without using clips or ties. Several passes to train the vines onto the trellis may be needed over a period of weeks. Some growers trim-off the first four to six lateral vines near the base of the plant to promote better airflow and better pesticide penetration within the canopy. Above this level, the lateral vines are allowed to develop and trained to grow on the trellis.2 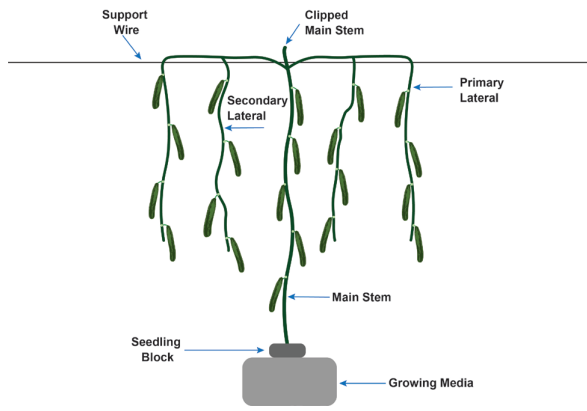 Figure 3. An umbrella system commonly used for the production of greenhouse-grown cucumbers.

Performance may vary from location to location and from year to year, as local growing, soil and weather conditions may vary. Growers should evaluate data from multiple locations and years whenever possible and should consider the impacts of these conditions on the grower’s fields. The recommendations in this article are based upon information obtained from the cited sources and should be used as a quick reference for information about cucumber production.
The content of this article should not be substituted for the professional opinion of a producer, grower, agronomist, pathologist and similar professional dealing with this specific crop.