Plasticulture is a system of crop production involving the combination of raised beds and plastic mulch. It often includes the use of drip irrigation and, in some cases, the application of soil fumigants. Watermelons in the United States are grown in both plasticulture and bare ground systems, but the use of plasticulture has increased as production has shifted from standard, seeded varieties to triploid, seedless varieties of watermelon.

Plasticulture systems use raised beds, typically 6 to 8 inches high, which are created with specialized bed shapers (Figure 1). Soil temperatures at a 2-inch depth in beds covered by plastic mulch can be 5 to 14°F higher than surrounding soil temperatures. The soils in the beds drain more quickly than flat ground soils, and soil moisture levels can be managed more precisely, resulting in more uniform moisture conditions throughout the season. The beds also help reduce problems with soil erosion in contoured fields.1 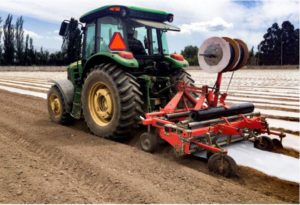 Bed preparation can take more time, and more attention needs to be paid to aspects such as the soil cultivation texture and the decomposition of cover crop residue because the best results are seen with smooth bed surfaces that allow for good soil-to-mulch contact. Rough soil surfaces lead to large gaps between the mulch and the soil surface, reducing the soil heating effects of the mulch.

The plastic mulch that covers the beds accomplishes several things. Depending on the color and transparency of the mulch, it will raise or lower the soil temperature. It will also conserve soil moisture, reduce leaching of nutrients, inhibit weed growth (again, depending on color), and protect fruit and foliage from pathogens in the soil. The type of mulch used will depend on the crops to be grown, the season of the year, seasonal temperatures, whether the system will be used for single, double, or triple cropping, and the need for insect management.2,3,4

Clear or dark colored (blue or black) mulches warm the soil through solar heating. Clear plastic results in the greatest heating. Much like a greenhouse, sunlight passes through the plastic, and the energy is transferred to the soil. Under clear plastic mulch, soil temperatures can be 8 to 14°F higher at a 2-inch depth and 6 to 9°F higher at a 4-inch depth. Dark blue and black mulch usually result in a 5°F temperature increase at 2 inches and a 3°F increase at 4 inches. Warmer soils, especially early in the season, allow seedlings or transplants to establish and grow faster, and this results in an earlier harvest, as much as 10 to 14 days earlier. Early harvests can bring premium prices in some areas, offsetting the higher costs of production. Yield levels also tend to be higher in plasticulture systems, which can also compensate for the higher production costs.3,5

White and silver mulches can reduce soil temperatures, as they reflect sunlight. This can help prevent heat damage to crops grown in regions with very warm conditions. White on black mulches have mostly replaced white mulches in recent years. Silver mulches (silver over black) have the added advantage of repelling some insects, such as aphids, which vector viral diseases.4

Plastic mulches also help conserve soil moisture by reducing evaporation of water from the soil surface. Total water use rates may actually increase because of increased plant growth, but the overall water use efficiency will be higher in a plasticulture system. In bare ground production systems, irrigation is supplied through overhead sprinkler irrigation, such as traveling gun or center pivot systems, or with furrow/flood irrigation. Overhead irrigation can also be used with mulched bed systems, but water use efficiency is higher with drip irrigation laid under the plastic mulch.

With drip systems, water can be delivered to the crop root systems, but not to the weeds growing between beds, reducing weed growth. Uniform soil moisture levels near 80% field capacity are optimal for plant establishment between seeding/transplanting and the 10 to 12 leaf stage. The use of drip irrigation also reduces periods of leaf wetness, as compared to the use of overhead irrigation. This results in lower levels of many foliar and fruit infecting diseases that require films of water on plant surfaces to infect and that can be spread by splashing water.2

Protection from exposure to rain by mulch coverage and the increased drainage of the raised beds helps reduce periods of excessive moisture resulting from heavy rain. This is especially important in the two weeks before harvest when high soil moisture levels result in lower sugar content in the fruit at harvest.2

The mulch layer keeps developing fruit out of contact with the soil and reduces the amount of soil splashing onto fruit, vines, and leaves (Figure 2). This results in lower levels of diseases caused by pathogens that survive in the soil or on infested plant debris. It will not reduce levels of diseases such as powdery or downy mildew that do not overwinter in the field.3 The plastic mulch layer also reduces leaching of nutrients from rainfall, especially in light, sandy soils. This reduces the need for reapplication, reducing fertilizer and labor costs, and protects groundwater.3 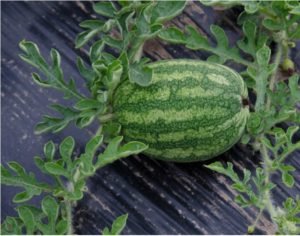 Figure 2. Watermelon fruit on plastic mulch is less likely to be infected by soilborne pathogens.

It is recommended that fertilizer applications for watermelons be split, with 40 to 50% of the nutrients applied to the soil before planting, and the  remaining amounts added in several applications during crop development. In bare ground production systems, two or three side-dress applications are typically recommended prior to vining. In plasticulture systems with drip irrigation, nutrients can be added through the drip system (fertigation) periodically throughout the season. Nitrogen applications after harvest of crown set fruit can help increase later production. Such applications are possible using fertigation, but not usually feasible in a bare ground production system.2

With all the potential benefits of growing watermelons in a plasticulture system, why are any melons grown in a bare ground system? Along with the advantages of plasticulture, there are some disadvantages. The primary disadvantage is the added cost of production. The specialized equipment needed to shape beds, lay plastic and drip tape, and plant plug-mixes or transplants can be expensive. In addition, there are yearly costs of purchasing the plastic mulch, drip tape, and other supplies.1

A big disadvantage of plasticulture systems is all of the plastic (mulch and drip tape) that needs to be removed and discarded when it is no longer usable after the production of one or more crops. In some places, this plastic can be recycled. Some types of mulches are bio- or photo- degradable, eliminating the need for disposal. In other cases, the plastic ends up in a landfill. Plasticulture systems also are more labor intensive to set up and maintain, and there is an increased level of management and expertise required for the daily monitoring of mulch and drip system operation. In many cases, these disadvantages are offset by the increased yield and quality of the crop, but not always and not for all types of growers.1,2

Individual results may vary, and performance may vary from location to location and from year to year. This result may not be an indicator of results you may obtain as local growing, soil and weather conditions may vary. Growers should evaluate data from multiple locations and years whenever possible. ALWAYS READ AND FOLLOW PESTICIDE LABEL DIRECTIONS. The recommendations in this article are based upon information obtained from the cited sources and should be used as a quick reference for information about watermelon production. The content of this article should not be substituted for the professional opinion of a producer, grower, agronomist, pathologist and similar professional dealing with these crops.

SEMINIS DOES NOT WARRANT THE ACCURACY OF ANY INFORMATION OR TECHNICAL ADVICE PROVIDED HEREIN AND DISCLAIMS ALL LIABILITY FOR ANY CLAIM INVOLVING SUCH INFORMATION OR ADVICE.  161028152344 DME120216