WHAT IS PLANT DISEASE RESISTENCE?

Plant disease resistance is one of the most effective, inexpensive, and environmentally sound means for managing plant diseases.1 The term resistance is defined as “the ability of a plant variety to restrict the growth and/or development of a specified pest and/or the damage it causes when compared to susceptible plant varieties under similar environmental conditions and pest pressure.”2 Remember that all plants are resistant to most pathogens. That is to say that a tomato plant will not be infected by the fungal pathogen that causes common rust on corn or the bacterial pathogen that causes fruit blotch on watermelon. This is called non-host resistance.3 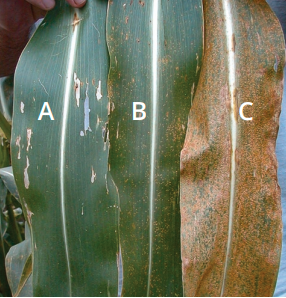 The ISF recommends the use of a standard system for indicating the specific races or strains of a pathogen to which a variety is resistant. For example, the designation Fol:1,2,3 indicates that a tomato variety is resistant to races 1, 2, and 3 of the Fusarium wilt pathogen Fusarium oxysporum f. sp. lycopersici. The resistance of a variety is usually compared to a standardized set of cultivars that define the range of known susceptible and resistant reactions to that disease. The lists of differential cultivars and the protocols for evaluating resistance are also provided by the ISF.2 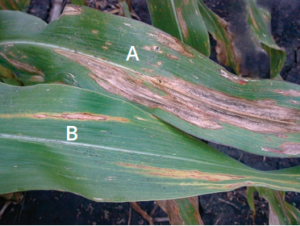 Figure 2. Sweet corn plants infected with northern leaf blight showing (A) lesions on a susceptible hybrid and (B) lesions on a hybrid with the Ht1 resistance gene. Jerald Pataky, University of Illinois.

Most of the gene-for-gene type resistance systems result in what is called a hypersensitive response in the plant. With a hypersensitive system, the plant cells near the point of infection undergo programmed cell death to disrupt the disease process. The plant cells may release substances that inactivate toxins produced by the pathogen or have antimicrobial effects on the pathogen. Some of these same defense systems are activated in susceptible varieties of plants, but the activation is delayed or takes place more slowly, allowing infection by the pathogen.1 Race specific resistance can convey immunity or near immunity to a disease, or it can reduce the level of disease incidence and/or severity. However, as with race non-specific resistance, some symptoms may develop with an R gene resistance reaction (Figure 2). Race specific and non-race specific forms of resistance can be combined in the same variety to provide the benefits of both types of resistance.

Both race specific and non-race specific resistance genes can be found in a number of sources, including native or foreign commercial varieties, older varieties, abandoned or discarded breeder’s stock, and wild plant relatives. Resistance may also develop through the mutation of genes in existing varieties. Once resistance genes have been identified, they have to be transferred into commercially acceptable varieties that have the other characteristics desired by growers and consumers. This can be done using classical plant breeding, molecular genetic techniques, or both.3

With classical plant breeding, a resistant plant is mated with a susceptible breeding line, and the resulting offspring of that cross are screened for the resistance trait following inoculation with a virulent pathogen under conditions favorable for disease development. The resistant offspring are then backcrossed to the susceptible breeding line several times to develop a line that has the desirable characteristics of the breeding line as well as the disease-resistant trait. This process is easier to accomplish with monogenic forms of resistance, but it is also used to transfer polygenic forms of resistance. The process can be speeded up by the use of marker-assistedselection. If the resistance trait is associated with a known genetic marker, then looking for the genetic marker in tissue taken from seeds or seedlings can eliminate the need for disease screening through inoculation during the backcrossing stages. The final product still needs to be evaluated following inoculation to ensure that the resistance trait has been transferred.3

Because pathogens can adapt and form new races in response to the use of disease resistance, the process of developing disease-resistant varieties is an on-going one. Plant breeders and plant pathologists are continually trying to stay a step or two ahead of the pathogens by identifying and transferring new resistance genes into commercial varieties.

For additional agronomic information, please contact your local seed
representative.
Performance may vary from location to location and from year to year, as local growing, soil and weather conditions may vary. Growers should evaluate data from multiple locations and years whenever possible and should consider the impacts of these conditions on the grower’s fields. The recommendations in this article are based upon information obtained from the cited sources and should be used as a quick reference for information about vegetable production.
The content of this article should not be substituted for the professional opinion of a producer, grower, agronomist, pathologist and similar professional dealing with vegetable crops.
BAYER GROUP DOES NOT WARRANT THE ACCURACY OF ANY INFORMATION OR TECHNICAL ADVICE PROVIDED HEREIN AND DISCLAIMS ALL LIABILITY FOR ANY CLAIM INVOLVING SUCH INFORMATION OR ADVICE.
9050_SE_S8 Published 12/17/2020