»Phytophthora blight can affect all parts of pepper plants and result in significant crop loss.
»The pathogen can survive in soil for several years and infect a wide range of crop plants.
»Management should involve an integration of crop rotation, soil and water management, the use of resistant varieties, and the application of fungicides when necessary.

Phytophthora blight on peppers is caused primarily by the pathogen Phytophthora capsici (P. capsici ), although other species of Phytophthora and the related genus Pythium can sometimes infect peppers causing similar symptoms.1 P. capsici belongs to the Oomycete (water mold) group of fungal-like organisms. P. capsici occurs naturally in many soils, and it produces thick walled resting spores (oospores), which can remain viable in the soil for several years. The pathogen can also survive in infested crop debris.

P. capsici is spread through movement of soil or by water running through an infested area. The pathogen is also spread by wind or splashing water as spore-like structures called sporangia. Sporangia can either germinate directly and infect pepper tissue, or they can produce several swimming spores (zoospores) that spread over the plant surface in films of water and initiate multiple infections.

This pathogen has a wide host range. It is able to cause disease on a number of solanaceous crops, including pepper, eggplant, and tomato, as well as cucurbitaceous crops including cucumber, squash, pumpkin, watermelon, and muskmelon. P. capsici has also been found to infect snap bean and lima bean and weed species such as black nightshade and Carolina wild geranium.2

Phytophthora blight on peppers is extremely damaging and can result in total loss of the crop prior to the first harvest.2 The disease is favored by warm conditions with air temperatures of 24 to 29 °C (75 to 85 °F) and soil temperatures above 18°C (65 °F). The pathogen needs wet conditions for infection. Saturated soils are needed for the oospores to germinate, resulting in infections of the roots and lower stems. The disease is often seen first in low lying areas of fields and at the end of irrigation runs where water drains from the system (e.g. the down-slope ends of drip irrigated beds). Free moisture on plant surfaces is needed for infection of stems, leaves, and fruit.

The disease often starts from soilborne inoculum or from infected transplants. Inoculum can also be present in surface water (ponds and streams) used for irrigation or in infested debris, such as rotting fruit in cull piles. Repeated planting of susceptible crops with short rotation schedules, along with heavy rain or excessive overhead irrigation, can lead to severe outbreaks of Phytophthora blight.

Plants can be infected at any time during the season, and all parts of the plant can be infected. Phases of the disease include rotting of roots, crowns, and fruit, and blighting of leaves and stems.1 Seedling infections can result in damping off, with early infected plants dying quickly. However, few seedlings usually die if temperatures are low.1 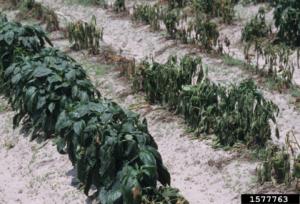 On older plants, infections often occur first on crowns at or just above the soil-line. Black lesions develop on crown and lower stem tissues. These lesions expand and can eventually girdle the stem, resulting in permanent wilting above the lesions. Infected areas of the roots become water-soaked and turn a chocolate brown color. Both taproots and lateral roots can be infected. Small lateral roots often rot away, and rot can shorten taproots.

Splashing water can spread the pathogen into the upper canopy, leading to stem lesions and fruit infections. Leaf infections are not as common but can occur, showing up as circular lesions with tan margins and brown centers. Rotting of roots and stem tissue restricts water flow in the plant, resulting in a wilting of leaves. Wilt during the heat of the day exposes the fruit and can result in sunburn. Fruit rot is fairly common, especially on fruit in contact with the soil. Moist, cream colored lesions form on the fruit, and these areas can become covered with a layer of white mold growth. Affected fruit shrivel but remain attached to the plant. Sometimes fruit can become infected in the field, but symptoms do not show until after harvest when the fruit is headed to market.

Complete control of Phytophthora blight is very difficult if the pathogen is present and conditions are favorable. The first measure of defense is to prevent the introduction of the pathogen by using clean transplants and pressure washing any potentially infested soil off equipment that may have been in an infested field before it enters non-infested areas.

The best way to manage the disease once the pathogen is present is to use an integrated program of crop rotation, water management, soil management, the use of resistant cultivars, and fungicide applications.4 Long term crop rotations of three to four years away from any susceptible host, including other solanaceous and cucubitaceous crops, will not eliminate the presence of the pathogen, but rotation will reduce the buildup of inoculum in the soil.

Promoting good soil drainage by breaking up hard pans, planting on raised beds, and not planting in low areas, helps prevent plants from sitting in saturated soils for extended periods of time. The use of natural or plastic mulches helps reduce the splash of inoculum up into the canopy and keeps fruit from coming into contact with the soil.4 Using well-water for irrigation, instead of potentially contaminated surface water sources, can prevent the introduction or spread of inoculum by irrigation. Using drip irrigation, rather than overhead systems, reduces the spread of inoculum in the canopy and reduces the presence of films of water on plant surfaces that facilitate infection.

Host resistance to Phytophthora only protects against the crown rot phase of the disease. It does not provide protection against the foliar phases. Only intermediate levels of resistance are currently available in peppers. Resistant plants can be infected and show symptoms, but to a lesser extent than what is seen on fully susceptible varieties. The over-use of resistant varieties can result in a breakdown of that resistance as the pathogen adapts. So using strategies to delay the development of new races of the pathogen prolongs the usefulness of these varieties.4

As with the other management strategies discussed, the use of fungicides will reduce disease severity levels, but it will not completely control the disease, and fungicide applications are not very effective once symptoms have developed.4 A number of fungicides are available and labeled for use against Phytophthora on peppers, but there are differences in these products that growers need to be aware of when selecting products. Fungicides vary in where and when they can be applied and in the required pre-harvest interval (PHI). Some fungicides are applied to the soil, either at planting or as soil drenches or directed sprays after planting. Other fungicides can be applied as foliar sprays throughout the season.5 PHI requirements vary among products from 0 to 30 days. Even a product with a PHI of 5 days may not fit well in a system when weekly harvests are scheduled.

Pathogen resistance has developed to some of the fungicides used for Phytophthora on peppers. In particular, resistance to the phenylamide group of fungicides, which includes metalaxyl and mefenoxam (Ridomil Gold®), has developed in several areas, and these fungicides are no longer effective for this purpose in these locations.4 To delay the development of fungicide resistant pathogens, growers are encouraged, or sometimes required by product label instructions, to alternate applications and/or to tank mix fungicides with different modes of action.5

It is best not to use fungicides or resistant pepper cultivars in areas with no known history of the disease in order to help maintain the effectiveness of these products. However, it is appropriate to use resistant varieties and/or fungicides in non-infested fields that are located on farms where the pathogen is present in other fields on that farm.

Individual results may vary, and performance may vary from location to location and from year to year. This result may not be an indicator of results you may obtain as local growing, soil and weather conditions may vary. Growers should evaluate data from multiple locations and years whenever possible. ALWAYS READ AND FOLLOW PESTICIDE LABEL DIRECTIONS. The recommendations in this article are based upon information obtained from the cited sources and should be used as a quick reference for information about Phytophthora on peppers. The content of this article should not be substituted for the professional opinion of a producer, grower, agronomist, pathologist and similar professional dealing with this specific crop

SEMINIS DOES NOT WARRANT THE ACCURACY OF ANY INFORMATION OR TECHNICAL ADVICE PROVIDED HEREIN AND DISCLAIMS ALL LIABILITY FOR ANY CLAIM INVOLVING SUCH INFORMATION OR ADVICE. 160525093639 062116DME