» Tobacco mosaic, tomato mosaic, tobacco etch, and Pepper mottle are important viral diseases of pepper that can reduce yield levels and fruit quality of pepper crops.
» Viral diseases are difficult to distinguish based on symptoms alone, and laboratory assays are needed to accurately identify viral pathogens in most cases.
» These virus diseases are managed primarily through cultural practices that reduce or delay infection and by the use of virus resistant pepper varieties.

Tobacco mosaic virus (TMV) and Tomato mosaic virus (ToMV) belong to the Tobamovirus group of viruses. TMV and ToMV are widespread, occurring wherever pepper crops are grown, and they have large host ranges, infecting over 200 species of plants. Yield losses of 30 to 70% have been observed on susceptible pepper varieties.1

Symptoms of TMV and ToMV are similar and vary with the strain of the virus, the variety of pepper, and conditions such as temperature, light-levels, day-length, and plant age. Typical symptoms include chlorotic mosaic patterns on leaves and fruit, distorted leaves and misshapen fruit, and premature defoliation. Sometimes necrotic (brown) patches develop on leaves and fruit. Plants may be stunted if infected when young.1,2,3,4

TMV and ToMV are different from many plant viruses in that they are not transmitted by invertebrate vectors such as insects, nematodes, and fungi.3 These Tobamoviruses are transmitted mechanically, meaning that the virus can be moved from plant to plant in the sap from an infected plant by plant to plant contact or on tools and the hands and clothing of workers.1,2 Another means of transmission for TMV and ToMV is on infested seed. The virus particles of these two viruses are very stable and can remain viable in infested crop debris, pots and stakes. Even tobacco products used by workers can contain viable virus particles and serve as a source of inoculum when plants are being handled.4

Because TMV and ToMV can survive in crop debris for several years, rotation to non-host crops is recommended following a disease epidemic. Greenhouse surfaces, pots, and stakes should be disinfected before being used for seedling production, and the handling of seedlings should be minimized.2 Workers should wash their hands and disinfect tools regularly.1,4 Removing symptomatic seedlings in the greenhouse and young transplants in the field can help slow the spread of these viruses. Only disease-free seed and transplants should be used. Destroying the crop promptly after harvest will help crop debris to decompose more quickly.

Most commercial pepper varieties are resistant to the common strains of TMV. Tobamovirus resistance genes commonly used are alleles (different versions) of the L gene (L+, L1, L2, L3, L4), and these genes convey resistance to both TMV and ToMV.3 However, pepper varieties with these L genes tend to become more susceptible to infection at temperatures above 86°F.

Both Tobacco etch virus (TEV) and Pepper mottle virus (PepMoV) belong to the Potyvirus group, named for Potato virus Y. TEV is most common in North and South America, and PepMoV occurs most frequently in the U. S. and Mexico.1 In the U.S., TEV and PepMoV occur most commonly in the southern parts of the country, but can occasionally be found in northern locations.5 TEV is one of the most damaging viruses to pepper crops in the U. S. There are several strains of TEV, and disease incidence level of up to 100% and yield losses of up to 70% have been recorded.1 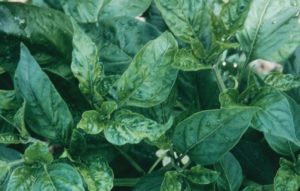 Symptoms of TEV and PepMoV infection of pepper are similar. Infected plants are lighter in color and have mosaic patterns on their leaves (Figure 1), sometimes with dark-green banding along the leaf veins. Symptoms are most severe on younger leaves.2 TEV and PepMoV infected plants may be stunted and show leaf curling and fruit distortion if infected when they are young, and symptoms and yield reductions are more severe.

Both TEV and PepMoV are transmitted by several species of aphids in a non-persistent manner. This means that aphids pick up virus inoculum from infected plants after a short feeding time (seconds to minutes), and the viruses are also transmitted to non-infected plants after a short period of feeding. However, the aphids do not remain infective for long. The virus particles remain on the outside of the aphid’s stylet (feeding tube) and are removed after a few probes of the stylet into plant tissue.1,2 The viruses are spread most quickly during periods when aphids are moving through a planting, occasionally probing, before they settle down for long-term feeding. Both viruses survive in solanaceous plants, including tomato and tobacco, and several weed hosts, including horsenettle, thistle, lamb’s-quarter, and jimson-weed. Neither virus has been reported to be seedborne.1

The first steps in managing TEV and PepMoV is to focus on preventing or delaying infection. Pepper seedlings should be produced in protected culture systems equipped with nets or screens to exclude aphids, and seedling production should be located away from field production areas if possible.3 Reflective mulches have been shown to repel aphids early in the season, delaying infection by aphid-borne viruses. Scheduling planting dates to avoid periods of high aphid activity early in the season will also delay infection, and controlling weed and volunteer host plants in and around seedling and field production sites will lower the amount of virus inoculum introduced into the crop, especially in northern growing areas.2,5 Roguing-out symptomatic seedlings before or shortly after transplanting can also reduce the incidence of these virus diseases.3 Destroying the crop promptly after harvest will reduce the spread of TEV and PepMoV to nearby plantings.

Insecticide applications to manage the aphid vectors is not effective in controlling TEV or PepMoV in most areas because the aphids transmit the viruses before the insects are killed by the insecticide. The regular application of mineral oil emulsions (known as stylet oils) has been shown to interfere with the transmission of aphid-borne viruses and effectively lower disease incidence.1,3,5

The primary method for managing TEV and PepMoV is the use of disease-resistant pepper varieties. The genes providing resistance to Potyviruses are referred to as pvr genes. There are several alleles (versions of a gene) at the pvr1 gene location that convey resistance to Potyviruses, but not all of them are equally effective. For example, pvr12 conveys resistance to TEV, but pvr11 does not. The pvr12 gene has been used in peppers and remained effective for many years, but resistance breaking strains of TEV do occur in some areas. Other genes, including pvr3 and Pvr4 covey resistance to PepMoV, but not to TEV. The Pvr4 gene is very durable and has been used effectively in peppers for more than 20 years. Some polygenic, partial forms of resistance have also been identified in peppers, but this type of resistance is not widely available in commercial pepper varieties.3 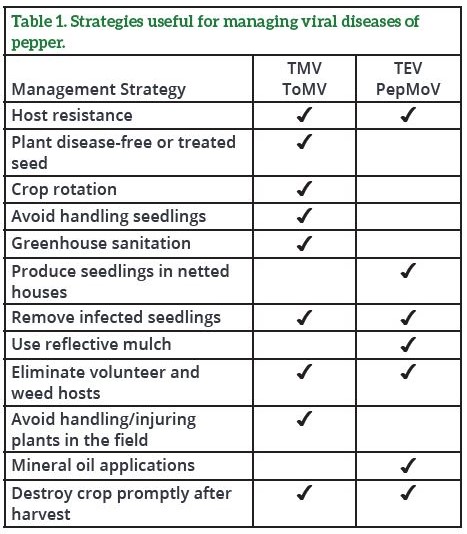 Performance may vary from location to location and from year to year, as local growing, soil and weather conditions may vary. Growers should evaluate data from multiple locations and years whenever possible and should consider the impacts of these conditions on the grower’s fields. The recommendations in this article are based upon information obtained from the cited sources and should be used as a quick reference for information about pepper virus diseases. The content of this article should not be substituted for the professional opinion of a producer, grower, agronomist, pathologist and similar professional dealing with this specific crop.

SEMINIS VEGETABLE SEEDS, INC. DOES NOT WARRANT THE ACCURACY OF ANY INFORMATION OR TECHNICAL ADVICE PROVIDED HEREIN AND DISCLAIMS ALL LIABILITY FOR ANY CLAIM INVOLVING SUCH INFORMATION OR ADVICE. 180626072236011619DME