» Stip is a disorder of peppers in which the fruit develops discolored spots near harvest.
» Nutrient levels, temperature, light levels, and genetics may all play a role in stip development.
» Planting stip-insensitive varieties and avoiding excessive nitrogen applications may help reduce the incidence of stip.

Stip is the name of a pepper disorder where the fruits develop spots as they mature. The name comes from the German word stippen, which means “specks.” Other names for the disorder include black spot, colour (color) spot, green spotting, green pitting, spotting, bitter pit, and pepper spot.1,2

Stip can affect several types of peppers including bell, pimento, and the elongated New Mexico/Anaheim types. The disorder appears as subcutaneous spots (or lesions) on the fruit. The spots can be gray, brown, black, green, or yellow in color (Figure 1). They are slightly sunken, oval or irregular in shape, and can vary from 1 to 15 mm in diameter, typically about ¼ inch in diameter. The spots can occur singly or in groups, with as many as 30 spots per pod.2 The presence of the spots significantly reduces the marketability of the fruit.3 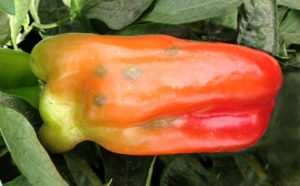 The occurrence of the disorder is difficult to predict, being somewhat sporadic from year to year. On bell peppers, it is most commonly observed in the late summer and fall, (from August to mid-September in North America). It is most noticeable on mature red fruit. However, lesions also can occur on mature green fruit.2 In Arizona and New Mexico, symptoms of stip are seen most frequently on elongated chili peppers during the hottest parts of the growing season.4

With bell peppers, older, open-pollinated varieties (such as Yolo Wonder) tend to be more susceptible to the disorder, with hybrid varieties being fairly resistant.3,5 There is some variation in chili type peppers, but most are fairly susceptible (Figure 2).4 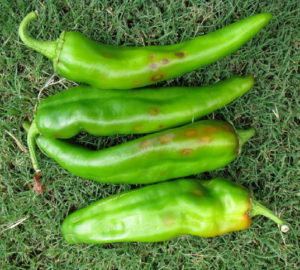 Several suspected causes of stip have been investigated over the past 30 years. The disorder is believed to be physiological in nature, as no biotic pathogens (bacteria, fungi, nematodes, or viruses) have been associated with the symptoms, and there is no link between symptoms and insect damage. There is some evidence that nutrient imbalances involving nitrogen (N), potassium (K), and calcium (Ca), as well as temperature extremes and available light levels may be involved in the problem.1

There is some association of the disorder with fruit size. The incidence and severity of symptoms tend to be higher on open-pollinated varieties grown under conditions that promote the production of large fruit (i.e., high N levels). The problem is less common on newer hybrids that have been bred to produce large fruit. One explanation for these observations is that the fruit of older varieties have smaller diameter xylem elements (the water and nutrient conducting tissue). Larger fruit have higher demands for water and nutrients, which the smaller xylem elements are not able to supply during periods of peak demand. The newer varieties, bred to produce larger fruit, may also have larger diameter xylem elements that can supply the demands of the growing fruit.1

Several studies have evaluated the role of N, K, and Ca in the development of stip. Studies by Smith et al., (1996, 1999) evaluated the level of these three nutrients in fruit and leaf tissues of resistant and susceptible, and symptomatic and healthy peppers. Petiole and leaf tissues on resistant varieties were found to have low N and K levels and high Ca levels as compared to petioles and leaves of susceptible varieties. Higher levels of calcium were detected in symptomatic fruit as compared to healthy fruit and in symptomatic fruit tissue as compared to the surrounding healthy fruit tissue.

The occurrence of stip tends to be more common in soils with low Ca levels and/or high levels of N and K. However, the addition of Ca in the form of soil applied lime actually increased the incidence of stip in some studies, possibly resulting from the lime treatment changing the soil pH. The foliar application of Ca to pepper plants has also had inconsistent effects on the disorder.5 Increasing the rates of N application has been found to increase the incidence and severity of stip in some studies, but not in others.

There may be an effect of temperature on the occurrence of stip. The incidence of the disorder tends to be highest on bell peppers harvested in the fall, as temperatures start to drop into the 30s and 40s, and on chili peppers stip is more likely to occur during the hottest parts of the growing season in Arizona and New Mexico. These observations have led some researchers to speculate that there may be an interaction between temperature, N levels, light levels, and the genetics of the pepper plants on the occurrence of stip.1,6 One study looked at the development of stip on three pepper varieties (with varying levels of sensitivity to stip) grown with different N application levels in shaded and non-shaded conditions.6 On the most sensitive variety, the highest levels of stip were seen on plants grown in shaded conditions with the highest levels of N (Table 1). This may explain the increased occurrence of stip in high density plantings where plants are shading one another, and in the fall, when the daylight hours are shorter. 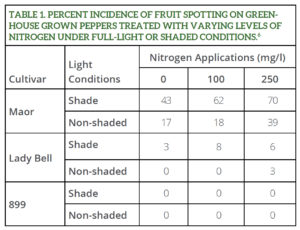 With an incomplete understanding of the cause of stip and the possible interaction of factors that may be involved, it is difficult to provide sound control recommendations until more is know about the problem. However, based on the research done to date and field observations of the problem, the current recommendations for managing stip include growing resistant varieties and selecting newer hybrids over older open-pollinated varieties, especially for fall harvested crops. Also, avoid excessive applications of N and K. The effects of soil and foliar applications of Ca have been inconsistent and are not recommended at this time.

Individual results may vary, and performance may vary from location to location and from year to year. This result may not be an indicator of results you may obtain as local growing, soil and weather conditions may vary. Growers should evaluate data from multiple locations and years whenever possible. ALWAYS READ AND FOLLOW PESTICIDE LABEL DIRECTIONS. The recommendations in this article are based upon information obtained from the cited sources and should be used as a quick reference for information about pepper stip. The content of this article should not be substituted for the professional opinion of a producer, grower, agronomist, pathologist and similar professional dealing with this specific crop.

SEMINIS DOES NOT WARRANT THE ACCURACY OF ANY INFORMATION OR TECHNICAL ADVICE PROVIDED HEREIN AND DISCLAIMS ALL LIABILITY FOR ANY CLAIM INVOLVING SUCH INFORMATION OR ADVICE. 161028153430 021417DME