There are many planting methods and configurations of plant spacing used for onion production in North America. Onions can be direct-seeded, transplanted with field-grown or greenhouse-grown transplants, or planted using onion sets, and onions are planted on flat-ground and raised beds (Figure 1). The between-row and within-row plant spacings vary considerably depending on the region, soil type, type of onion, and target market. Within each of these systems, the plant density can be adjusted to manipulate the final bulb size, plant structure, time to maturity, and severity of foliar diseases. 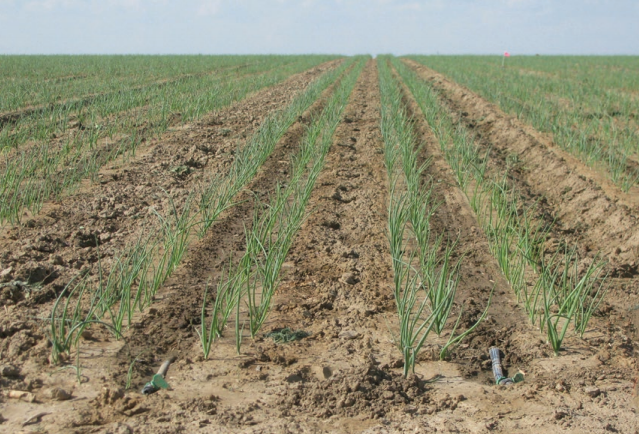 Total yield (tons per acre) and marketable yields of onion usually increase with increasing plant density.1,2 A study on the effect of planting density of long-day, globe-shaped onions in eastern Oregon looked at densities from 75,000 to 150,000 plants per acre.2 In this study the total marketable yields increased with increasing plant density. A similar study on short-day, flat, sweet onions in Georgia evaluated the effect of plant spacings from 31,680 plants per acre to 110,800 plants per acre.1 The standard plant density used in this area is 63,360 plants per acre. As in the Oregon study, total yields were highest in the standard and high-density plantings in most cases. However, other factors can influence the effect of plant density on yield. In the Georgia study, not all the varieties used in the study responded to plant density in the same way, and yield differences between treatments varied from year to year. The Oregon study also showed some variation in yield responses to density from year to year.2 Other studies have found that varieties can differ in their yield response to plant density and that the effects of planting density can vary with planting date or show an effect some years but not others.3,4,5

Total marketable yield is not the only yield criterion that should be considered when determining the planting density that will result in the largest profit per acre. Onion bulbs fall into size classes from small to super colossal (Table 1).6
Desired bulb sizes and marketable classes vary by region, but generally marketable onions are those that fall in the medium to super colossal size classes, with the larger bulbs being the most valuable.2

Larger sized onion bulbs often command a price premium over smaller bulbs, and the ratio of bulb size classes within the total marketable yield needs to be factored into the calculations for obtaining the highest gross return from a planting.1,2 However, some markets may require a uniform, medium-size distribution.

Some commonly used spacings by region are shown in Table2. Plant densities at the lower end of the specified range will likely result in lower total marketable yields but a larger proportion of larger-sized bulbs.

Plant density not only affects bulb size but also impacts other growth parameters. At lower densities, onions often produce an increased number of leaves per plant and have increased leaf lengths.2 Plant density can also have an effect on the rate of maturation. Higher plant densities often result in earlier maturity dates.1
One study found that leaf-fall on onions planted at 13 plants per square foot (140 plants per m2) occurred 8 to 10 days earlier than on onions planted at a density of 2 plants per square foot (20 plants per m2).9 However, the increased canopy density at higher planting rates can also result in higher levels of foliar disease due to reduced air circulation and longer periods of leaf wetness.

Performance may vary from location to location and from year to year, as local growing, soil and weather conditions may vary. Growers should evaluate data from multiple locations and years whenever possible and should consider the impacts of these conditions on the grower’s fields. The recommendations in this article are based upon information obtained from the cited sources and should be used as a quick reference for information about onion production. The content of this article should not be substituted for the professional opinion of a producer, grower, agronomist, pathologist and similar professional dealing with this specific crop.