Plant pathogenic nematodes are microscopic roundworms that feed on or in plant tissues. Most of the important nematode pathogens of pepper are soilborne and feed on the roots of pepper plants. Plant pathogenic nematodes are not able to move from field to field easily on their own. However, they can spread by anything that moves soil and plant debris, including agricultural equipment, the feet of humans and other animals, and irrigation water.1,2

Nematode-feeding on pepper roots results in root Dysfunction, reduced root volume, and reduced efficiency in water and nutrient uptake. The level of damage is proportional to the population levels of nematodes in the soil. With high nematode populations, pepper plants can be killed. Peppers affected by nematodes are more susceptible to moisture and temperature stress, and nematode feeding can predispose plants to infection by other soilborne diseases, such as Fusarium wilt and Verticillium wilt. Nematode damage tends to be more severe in light-textured (sandy) soils. Nematode feeding can cause substantial yield reductions with fewer and smaller fruit, wilting and stunting of plants, and an increase in sunburn damage on fruit from reduced leaf cover.1,3,4

The above-ground (foliar) symptoms associated with nematode infection are the result of abnormal root function, and they are similar to symptoms caused by other agents that affect root functions, including pathogens and abiotic factors. Common above-ground symptoms include patches of plants that are chlorotic, stunted, or wilted, and plants showing nutrient deficiency symptoms. However, some infected plants may not show any obvious above-ground symptoms. In fields with high nematode populations, seedlings and transplants may not develop properly and remain stunted or die. In soils with lower populations, symptoms may not appear until later in the season when high temperatures and fruit load put higher stress on the plants.1,3 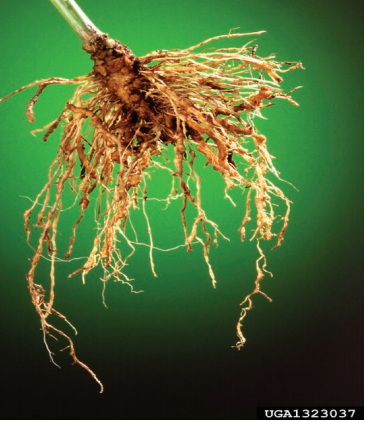 Root-knot nematode feeding on pepper roots causes the formation of root galls (Figure 1). The galls on pepper roots are not as large or obvious as the galls that form on crops such as tomato or melon. The galls can be just a few spherical swollen areas on the roots or extensive swellings where multiple infections have merged into elongated tumorous areas or result in a stringof-pearls appearance. In general, pepper roots that are affected by rootknot nematodes tend to be shortened and thickened.1,3,4

Root-knot nematodes survive in the soil as eggs. When the eggs hatch, juvenile nematodes emerge and seek out susceptible roots to feed on. The juvenile (larvae) nematodes set up feeding sites within the roots, which initiates the formation of the galls. The juveniles go through several molts to form male and female adults, which mate, and the females produce eggs completing the cycle. With warm conditions (82°F), the life cycle can be completed in 4 weeks, allowing several cycles per season and rapid population increases.4

The other nematodes on peppers have similar life cycles (eggs, juveniles, adults), but the time needed to complete a full life cycle varies with the species. They also differ in the symptoms they cause on the root systems. Stubby root nematode feeding results in root systems with many short and stubby lateral roots. Sting nematodes cause the formation of tight mats of short, swollen roots, and new root initials are killed resembling fertilizer burn. Root-lesion nematode feeding slows root growth and causes dark-brown lesions on the roots.1,3,4

Accurately diagnosing nematode problems in the field can be difficult and usually requires sending plant and soil samples to a diagnostic lab for analysis. Plants showing foliar symptoms will usually occur in groups (foci) in the field, as the nematodes spread slowly within the soil from year to year. It is helpful to determine if the recent cropping history included hosts of the suspected nematode species.

Obtain information on sample collection procedures from the lab that will be doing the analysis. Soil sampling usually involves dividing fields into 5-acre blocks and collecting subsamples from several random locations within each block. The best time to sample is at the end of the growing season, just before or just after harvest. Root samples should also be collected randomly from the planting but should only include roots from plants showing early to moderate symptoms. Rotten roots from dying plants can contain opportunistic organisms that make it difficult to detect the nematodes.1,3

To prevent the introduction of pathogenic nematodes into a field, equipment should be cleaned before it is moved from infested to non-infested fields. If pathogenic nematodes are present, crop rotation can be used to lower populations in the field. The rotational crop sequence will need to be chosen carefully because most of the pathogenic nematodes have wide host ranges that include common vegetable crop species. Crops should be chosen that are non-hosts or poor hosts that are not suitable for nematode reproduction. If multiple nematode species are present, it may not be possible to find non-host rotation crops for all nematodes present. Because root-knot tends to cause more damage and yield loss than the other nematode species, it is usually best to select hosts that manage root-knot populations. For example, sorghum is a host for the sting nematode, but not for root-knot nematodes.2,3

Other cultural management practices include fallowing and soil solarization. Clean fallowing involves keeping the field both crop and weed-free, usually in the off-season. The lack of live plants in the field deprives the nematodes of food sources. Including periodic soil-discing during the fallow period exposes the nematodes to the elements, increasing the effectiveness of the fallowing process. Soil solarization involves covering moist soil with clear plastic tarps for 4 to 12 weeks during the hottest period of the year. Temperatures under the tarps can increase to levels high enough to kill the nematodes in the upper levels of soil. However, nematodes can survive at lower soil depths and re-infest the upper layers over time.1,3

A series of Me (Me-1 to Me-7) genes have also been identified in pepper, and these genes provide heat stable resistance to various species of root-knot nematodes. Me-1, Me-3, and Me-7 are effective against a wide range of Meloidogyne spp. including M. arenaria, M. javanica, and M. incognita. Pepper varieties that contain both the Me-1 and Me-3 genes appear to have effective, durable resistance to most of the common species of root-knot nematodes present in North America.8

In pepper growing areas where nematodes are a persistent problem, the use of fumigant and non-fumigant nematicides has become common. Fumigant nematicides volatilize into gasses once in the soil and diffuse through the air spaces in the soil. Many of the available fumigants require covering the soil surface with plastic tarps to contain the fumigant in the soil for the necessary amount of time. In plasticulture systems, fumigants can be applied under the plastic mulch prior to planting. All of the currently available fumigants are phytotoxic and must be applied at least 3 weeks before planting (longer during periods of low soil temperatures) to give the fumigants time to disperse. Several fumigants are available that provide good control of nematodes on peppers. Check regional production and pest management guides for the products that are registered and effective in your area.<sup>1,3</sup>

For additional agronomic information, please contact your local seed representative.
Performance may vary from location to location and from year to year, as local growing, soil and weather conditions may vary. Growers should evaluate data from multiple locations and years whenever possible and should consider the impacts of these conditions on the grower’s fields. The recommendations in this article are based upon information obtained from the cited sources and should be used as a quick reference for information about pepper production.
The content of this article should not be substituted for the professional opinion of a producer, grower, agronomist, pathologist and similar professional dealing with this specific crop.
BAYER GROUP DOES NOT WARRANT THE ACCURACY OF ANY INFORMATION OR
TECHNICAL ADVICE PROVIDED HEREIN AND DISCLAIMS ALL LIABILITY FOR ANY CLAIM INVOLVING SUCH INFORMATION OR ADVICE.
9064_SE_S2 Published 07-09-2020