» Root-knot nematodes and sting nematodes can cause significant yield losses in fresh market tomatoes.
» Testing soils for nematode levels is useful in selecting the appropriate management strategies.
» Successful nematode management requires integration of variety selection, cultural practices, and the use of nematicides.

Root-knot nematode is the most important nematode pest on tomatoes in the United States, and the sting nematode is damaging to tomatoes in some areas.1,2 There are several species of root-knot nematode (RKN). Meloidogyne incognita (southern RKN) is the most widely distributed species. This species does best in areas with moderate soil temperatures, and it becomes inactive at temperatures below 66°F. Meloidogyne hapla (northern RKN), does best with moderate to low soil temperatures. At least four other species of Meloidogyne occur in the U. S., and they are typically found in southern, more tropical regions. The sting nematode (Belonolaimus longicaudatus) is found mostly in areas with course, sandy soils.1,2

RKN and the sting nematode both survive in the soil and in root debris as eggs and juveniles (larvae). Nematodes are spread by anything that moves soil or infested plant material, including field equipment, water running through fields, and infected transplants.

These nematodes have wide host ranges, including many vegetable, ornamental, and weed plant species. These nematodes feed on roots, resulting in dysfunctional root systems with reduced water and nutrient absorption. Poor root function results in above ground symptoms that include plant stunting, wilting, and leaf chlorosis. Affected plants often occur in patches in the field.1.2

Root symptoms of RKN include the development of swollen roots areas, called root galls. These galls can be spherical to elongated in shape (Figure 1) and vary in size depending on the specific species of Meloidogyne present. Symptoms of sting nematode infection include short, stubby roots, and the formation of tight mats of short roots.1.2

Once introduced, RKN and sting nematodes are almost impossible to eliminate from the soil. Management is based on an integrated approach involving cultural practices to reduce nematode populations, the use of resistant varieties, and the use of nematicides. It is important to lower populations before planting, as there are few effective postplanting control options. 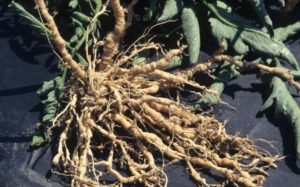 Soil population levels of nematodes are estimated by collecting soil samples from the field and having them assayed for nematodes. Estimates of the population size and distribution will help to determine the most appropriate control strategies to use. Fields should be divided into 5- acre sections and a zig-zag pattern used to collect 10 to 20 soil samples from each section. The 10 to 20 samples are combined to create one bulk sample for each 5-acre section. The samples are then immediately sent to a soil testing laboratory for analysis. Nematode populations are highest at the end of the growing season, so this is usually the best time to collect samples for analysis. Consult local extension or soil lab guidelines for the most appropriate time and procedures for soil sample collection and submission. Results are often reported as the average number of juvenile nematodes detected in 100 grams of soil. Nematode damage thresholds vary with the particular species present and with the texture of the soil. Counts as low as 2 juveniles per 100 g of soil can result in economically significant levels of yield loss.2,3

The use of nematode resistant tomato varieties is an important tool for managing nematode problems. The designation VFN on a tomato variety indicates resistance to Verticillium wilt, Fusarium wilt, and Nematode (RKN) damage. Seminis uses the designations Fol for Fusarium wilt resistance, Va/Vd for Verticillium wilt resistance, and Ma, Mi, and Mj to indicate resistance to particular RKN species. Some root infection by nematodes still occur on RKN resistant varieties, but the nematodes fail to develop and reproduce normally, and fruit yields are usually maintained even though some root galls develop. This form of resistance is conveyed by a single resistance gene (Mi), and it is effective against M. incognita, M. arenaria, and M. javonica but not against northern RNK (M. hapla). This resistance does breakdown when soil temperatures rise above 80° to 90°F. So this resistance should only be used for cool season plantings in areas where soil temperatures typically rise above 80°F. In areas where resistant varieties have been used repeatedly, nematode populations that are no longer affected by this form of resistance can develop. Resistant and susceptible cultivars should be alternated to prolong the effectiveness of resistance by slowing the development of resistance-breaking nematode populations.1,2 The use of tomatoes grafted onto nematode resistant rootstocks is another strategy that shows promise.

Plant parasitic nematodes do require the presence of a susceptible host plant in order to feed and reproduce, so rotating to non-host crops can reduce populations in some situations. However, both RKN and sting nematodes have very wide host ranges, including many vegetable and agronomic crops, so finding a non-host can be difficult. It may not be possible to find acceptable rotational crops that are effective at reducing populations. A one- to two-year rotation is usually effective, but the rotation may not be economically justified. Careful weed management during the rotation is also important, as many weed species are susceptible hosts for these nematodes.1,2

Additional cultural practices that have been shown to be effective for lowering nematode populations and yield losses include the addition of organic soil amendments through the use of cover crops and green manures, soil solarization, soil flooding, avoiding the use of ditch and pond water for irrigation, and the promotion of rapid decomposition of plant root debris by discing fields shortly after harvest.1,2

In many situations, the use of chemical nematicides may be required to adequately control nematodes on tomatoes. Nematicides can be grouped into two general categories, fumigants and non-fumigants. Fumigants are chemicals that become volatile gasses when applied to the soil. They disseminate through the soil and affect the target pests over a period of time (weeks). Fumigants can be applied on a whole-field basis, but it is more common to strip apply fumigants under the plastic mulch in plasticulture-raised bed systems (Figure 2). The fumigants are most effective when applied to well-drained soils in seedbed condition at temperatures above 60°F. Fumigants are most effective against RKN when infested plant debris is removed or allowed to decay prior to fumigation. All fumigants are phytotoxic, so it is important to allow for a two to four week plant-back period between application and the planting. Longer periods may be needed when soil temperatures are low. Fumigant products that are recommended for controlling nematodes on tomato include those that contain the active ingredients metam sodium or 1,3- dichloropropene (1,3-D).1,2 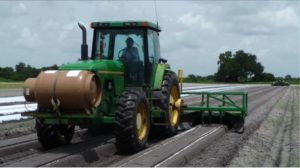 Figure 2. Strip fumigation of raised beds. The fumigant is being applied by the tractor in front, and the plastic mulch is laid by the second tractor.

There are not many non-fumigant nematicides registered for us on tomatoes, and they may not provide control that is as effective and consistent as the do the fumigant nematicides. Oxamyl (DuPontTM Vydate® L Insecticide/Nematicide) can be applied as pre- and post-plant treatments on tomatoes through soil treatment, foliar sprays, and through drip irrigation systems. This product is not registered for use in all states, and approved methods of application vary by state, so it is important to consult up-to-date product labels for information on where and how it can be used.1,2

Individual results may vary, and performance may vary from location to location and from year to year. This result may not be an indicator of results you may obtain as local growing, soil and weather conditions may vary. Growers should evaluate data from multiple locations and years whenever possible. The recommendations in this article are based upon information obtained from the cited sources and should be used as a quick reference for information about nematode diseases of tomato. The content of this article should not be substituted for the professional opinion of a producer, grower, agronomist, pathologist and similar professional dealing with this specific crop.

SEMINIS DOES NOT WARRANT THE ACCURACY OF ANY INFORMATION OR TECHNICAL ADVICE PROVIDED HEREIN AND DISCLAIMS ALL LIABILITY FOR ANY CLAIM INVOLVING SUCH INFORMATION OR ADVICE. 170808113844 100217DME