» Cucumber mosaic, papaya ringspot, watermelon mosaic, and zucchini yellow mosaic are important viral diseases of cucumbers.
» Symptoms of these mosaic diseases are similar and difficult to distinguish from each other.
» Host resistance and preventing the spread of viruses is the key to managing these diseases.

The disease, cucumber mosaic, is caused by the Cucumber mosaic virus (CMV). CMV is one of the most common and destructive cucurbit viruses, and it is widely distributed throughout temperate and tropical areas of the world.1,2 CMV can infect over 1200 plant species including both monocots and dicots.3 There are many strains of CMV that differ in the symptoms they cause, the range of hosts they infect, and their means of dispersal.4 Yield losses of 10 to 20% are common, and losses of up to 100% can occur.3 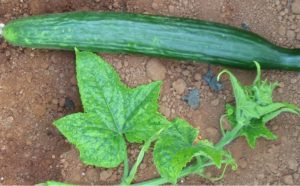 Cucumber plants can be infected with CMV at any stage, and once a plant is infected the virus spreads systemically within the plant. Symptoms appear 7 to 14 days after infection and develop most quickly at temperatures of 79 to 89 °F.1,3,4 A light- to dark-green mosaic or mottling appears first on the youngest leaves (Figure 1). New leaves are stunted and distorted with the outer edges curling downward.3,4 Plants are stunted, sometimes severely, with shortened internodes resulting in a bushy canopy. Flowers can show abnormal features such as green petals. Fruit produced on infected plants are often smaller and somewhat deformed, and show mosaic patterns of light and dark green on the skin.

The severity of CMV epidemics depends on the number of aphids present and the number of infected reservoir hosts. Aphid numbers tend to be higher when conditions are warm and dry.3 Cucumber beetles can also transmit CMV, but not as effectively as do aphids.4

Once thought to be different strains of the same virus, Papaya ringspot virus – watermelon strain (PRSV-W) and Watermelon mosaic virus (WMV) are now recognized as distinct viruses. WMV has a host range that includes most cucurbits, many legume species, and other plants such as carrot and spinach. WMV is found worldwide in most cucurbit growing regions. In the U.S., watermelon mosaic occurs most commonly in the southern and western growing regions, as well as in New Jersey and New York.1 Yield losses above 50% from WMV infection are not uncommon. The host range of PRSV is mostly limited to cucurbits, but it also infects species of Chenopodium, and PRSV-W is most commonly found in tropical and subtropical regions.

The symptoms resulting from WMV and PRSV infection are similar. All plant parts can be affected, with the severity of symptoms depending on the age of the plant at the time of infection. Earlier infection results in more severe symptoms. A green- to dark-green mosaic with vein banding occurs on cucumber leaves, and leaves may show narrow, elongated growth if infected when young.1 The fruit of WMV infected plants are typically stunted, gnarled, and sometimes knobby. Symptoms of watermelon mosaic usually develop within 7 to 14 days after infection, and mixed infections of WMV and CMV are common, especially later in the season.

WMV can overwinter on annual and perennial legumes such as clover, while PRSV-W usually spreads from wild perennial cucurbit hosts.

The Zucchini yellow mosaic virus (ZYMV) can be found worldwide in cucurbit growing regions, and zucchini yellow mosaic has become an economically important disease in several areas. ZYMV mostly infects cucurbits. Non-cucurbit hosts have been reported, but these are probably not very important in spreading the disease to cucumbers.1,2 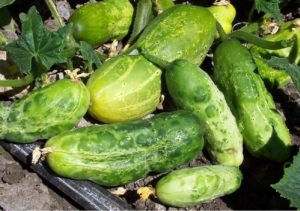 All four of these viruses are transmitted by several species of aphids in a non-persistent manner. With non-persistent transmission, the aphid vector picks up the virus after feeding on an infected plant for a few seconds to minutes. The aphid can then transmit the virus to a healthy plant very quickly, but the aphid only retains the virus for a short time, often for only a few hours or until the aphid starts feeding.

To lower the rate of infection by these four viruses, cucumber crops should not be planted near or downwind of established plantings of hosts that may be infected with any of the viruses. Planting early in the spring can allow the crop to become established before aphids arrive to spread the viruses, and the use of reflective mulches and/or row covers can help keep aphids away from plants early in the season. Reflective mulches repel aphids, but lose effectiveness as the canopy covers the mulch. Row covers act as a physical barrier to aphids, but they must be removed when plants start to flower to allow pollinators access to the flowers.1,3

Weed management of reservoir hosts in and around fields and greenhouses can help lower the rate of virus spread, but it can be difficult, especially for effective management of CMV, because of its very wide host range.1,3 Weed control early in the season has the most impact. Weeds should be cleared from an area of at least 10 feet around greenhouses, and elimination of reservoir hosts to at least 100 yards around production fields is recommended to effectively reduce virus spread.4

Managing aphids with insecticides is generally not effective for reducing the spread of non-persistently transmitted viruses because the viruses are introduced into the plants before there is time for the insecticide to kill the aphid.3 The application of mineral oils can help slow the spread of the viruses because the oil interferes with the release of the virus from the aphid’s stylet.4

If feasible, roguing virus-infected plants early in the season can help reduce the spread of viruses within a planting. Also, planting a non-host trap crop, such as wheat, around a cucumber field can help to “clean” the aphids of viruses as they feed on the trap crop before moving to the cucumbers.4 Prompt destruction of crop debris after the final harvest can help prevent the spread of these viral diseases to other nearby plantings.1

Performance may vary from location to location and from year to year as local growing, soil and weather conditions may vary. Growers should evaluate data from multiple locations and years whenever possible and should consider the impacts of these conditions on the grower’s fields. ALWAYS READ AND FOLLOW PESTICIDE LABEL DIRECTIONS. The recommendations in this article are based upon information obtained from the cited sources and should be used as a quick reference for information about cucumber diseases. The content of this article should not be substituted for the professional opinion of a producer, grower, agronomist, pathologist and similar professional dealing with this specific crop.

SEMINIS DOES NOT WARRANT THE ACCURACY OF ANY INFORMATION OR TECHNICAL ADVICE PROVIDED HEREIN AND DISCLAIMS ALL LIABILITY FOR ANY CLAIM INVOLVING SUCH INFORMATION OR ADVICE. 180118130224 042018DME