» Several insects have the ability to inflict severe damage to sweet corn crops during mid to late season.
» Understanding where insects may be found, how to identify insects and their damage, and how to scout for and control those insects can be important in maintaining the profitability of a sweet corn crop.
» Selecting a biotech trait or tolerant products may be another management tool. Talk to your local representative for more information.

Identification. Cornsilk flies are 2-4 mm long medium-dark metallic green to black flies with distinct wing patterns.1 Markings vary from 3-4 dark or black bands on front wings depending on the species. Larvae are long and cylindrical, white to pale yellow in color, and vary in length from 6-8 mm.1 Larvae feed on silks, cob, kernels, and damaged leaves and tassels within the whorls. 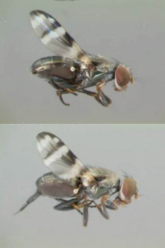 Scouting. Sampling should be conducted before tassel push through harvest. Adults are easily disturbed and can be hard to scout. It is best done in the early morning or late afternoon/evening when they are on the upper stalk and tassel. During silking, silk channels should be checked for eggs.

Control Measures. Although damage occurs from the larval stages, control measures target the adults because eggs and larvae are protected in the ears. Effective weed management in fields reduces their habitat. Infested fields should be treated before silks emerge with frequent insecticide applications.

Geography. In the United States, Texas and California have historically been known for cornsilk fly damage in sweet corn, but recent reports have been restricted to Florida, Georgia, South Carolina, Alabama, and Louisiana.1

Identification. Larvae are greenish-brown with lateral white lines.2 Mature larvae have a reddish-brown head marked with an inverted Y and are rough or granular in texture.2 When numerous, larvae travel as an ‘army’ destroying all host plants in their path. 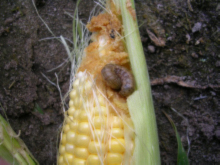 Scouting. Pheromone traps may be used at canopy height in corn during the whorl stage. Trapping is not a reliable indicator of density, but confirms their presence. Once detected, search 20 plants in 5 locations or 10 plants in 10 locations for eggs and larvae to determine the proportion of plants infested.2

Control Measures. Control is provided by insecticide use, concentrated during the silking stage. A high volume of liquid insecticide may be needed to penetrate the whorl. Insecticide may also be applied with irrigation water, or in granular form. Geography. Fall armyworms overwinter only in southern Florida and Texas, but are known to disperse everywhere east of the Rockies during the summer months.2

Identification. Full-grown larvae are about 1 ½ inches long, tan in color with a broad, faint tan stripe along the back and no side markings.3 The area behind the head has two broad brown stripes on it. 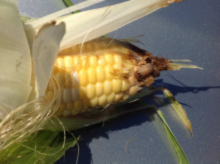 Scouting. Determine when to begin scouting by predicting moth emergence based on growing degree days (accumulation of 1320 to begin scouting) or using pheromone traps to determine when moths are flying.3 Examine 20 consecutive plants at 5 locations in the field. Check the upper 3-4 leaves for the presence of egg masses and small larvae.3

Control Measures. Foliar insecticides can be effective, but only if applied before larvae enter the ear. Application timing is critical and should be done after 95% tassel emergence, but before the larvae enter ears.3 A foliar insecticide should be used that has residual activity for a few days. The treatment threshold for processing sweet corn is 4% infestation.3

Geography. The western bean cutworm is native to North America. Traditionally pests of the High Plains and western Corn Belt, they are now found throughout the Midwest and becoming an increasing problem in Northeastern states and Ontario, Canada.

Identification. Larvae are hairy with a brown head with no markings. They are 1 ½ to 2 inches long and vary in color from yellow to green to red to brownish-black.4 Because they are cannibalistic, usually only one is found per ear or whorl.4 They feed on the kernels in ear tips following silking. 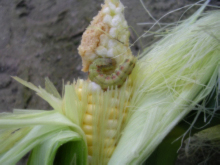 Scouting. Scouting can be done using pheromone traps and the number captured can be used to determine the frequency of insecticide applications.

Control Measures. Pyrethroid insecticides are generally used for control. Spray must be driven deep into silks for maximum benefit. Ground application can be done with drop nozzles on each side of the row directed toward the ears.4 Larvae should be monitored and sprayed accordingly, because once they are in the ear, control is impossible.

Geography. Corn earworm does not overwinter in northern corn growing areas, but travel in from the south.

Identification. Sap beetles are dark gray or brown, 3-4 mm long, and oblong to oval in shape.5 Antennae have easily distinguishable clubbed ends. Beetles and larvae can cause direct and indirect damage by feeding on silks and fallen pollen from tassels. They are attracted to earworm damaged corn and prefer it to undamaged ears.5 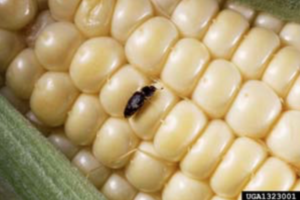 Scouting. Pheromone traps can be used to monitor populations and determine when treatment is necessary. Monitoring should begin when silks begin to wilt. Inspect the silk area at the tip of 20 ears at 5 sites and determine the percentage infested.5

Control Measures. Cultural control by plowing under crop debris to destroy overwintering and breeding sites is typically used. Sprays for other ear pests usually control sap beetles, but if other pests are not found, more than 10% infestation would warrant treatment for sap beetles.5

Geography. Found across most of the U.S.; they are more common along the Atlantic coast states. 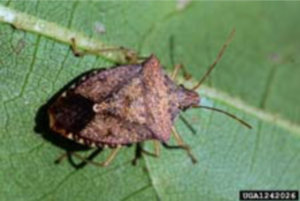 Scouting. Examining corn plants for stink bugs can give a proportion of plants infested. Thresholds are not always available for sweet corn, but are generally low, especially during the silking through milk stages, because of the direct damage stink bugs can do to the marketable product.

Control Measures. Foliar insecticides can be used for control. Populations may be found only in clumps in fields, therefore, spot or edge treatments may be adequate.

Geography. The southern green stink bug is found primarily throughout the southeast.6 The brown stink bug can be found throughout most of the U.S.7 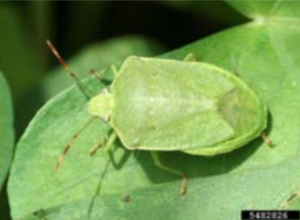 Individual results may vary, and performance may vary from location to location and from year to year. This information provided in this article may not be an indicator of results you may obtain as local growing, soil and weather conditions may vary. Growers should evaluate data from multiple locations and years whenever possible. ALWAYS READ AND FOLLOW PESTICIDE LABEL DIRECTIONS. The recommendations in this article are based upon information obtained from the cited sources and should be used as a quick reference for information about growing sweet corn. The content of this article should not be substituted for the professional opinion of a producer, grower, agronomist, pathologist and similar professional dealing with this specific crop.

SEMINIS DOES NOT WARRANT THE ACCURACY OF ANY INFORMATION OR TECHNICAL ADVICE PROVIDED HEREIN AND DISCLAIMS ALL LIABILITY FOR ANY CLAIM INVOLVING SUCH INFORMATION OR ADVICE.