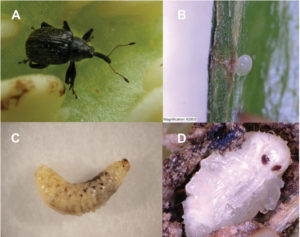 The pepper weevil (Anthonomus eugenii) is one of the most destructive insect pests on peppers in North America. The insect is endemic throughout Central America, the Caribbean, and southern parts of the United States from Florida to California.1,2 The pepper weevil can move northward during the growing season, infesting pepper crops in areas such as New Jersey. Yield losses as high as 80% have been reported.3,4,5

Peppers are the primary host for pepper weevils, and the insect will only lay eggs and feed on plants in the Solanaceae family, including weed species such as black and silverleaf nightshades and horsenettle. All commercial pepper varieties currently available are susceptible to pepper weevil damage.1,4,6

The body of the adult pepper weevil is about 1/8 inch-long, arched, dark in color with a brassy luster, and has a long snout/beak (Figure 1a). Larva are white to gray in color with yellowish-brown heads and are 1/4 inch long when fully grown (Figure 1c). Pupa resemble adults with no wings and are initially white, becoming yellowish with brown eyes (Figure 1d).1,5

Females lay eggs in small fruit and flowers, most often in the upper canopy. The process of egg laying punctures the fruit and flowers, causing oviposition wart on fruit. The larvae that hatch from the eggs feed on the flower buds and on internal fruit tissue. Adult beetles make exit holes in the walls of the fruit when they emerge (Figure 2). Adult weevils also feed on fruit and flower buds. Feeding causes flowers and young fruit to abort and prematurely drop. An indication of pepper weevil infestation is the presence of several dropped fruit at the base of a plant. Fruit that continue to develop can be deformed. On larger fruit, larvae feed on the inner core and fruit walls. The infested fruit may show no external symptoms other than the puncture wounds made during egg laying. The calyx and stems of infested fruit may turn yellow, and the inner core can become brown and moldy. If no flowers or fruit are present, adults can feed on stems and leaves, but this rarely causes major damage to the plant.1,3,5,6,7

In areas with winters that are too cold for the weevils to overwinter, the insects can be brought in on pepper fruit or transplants grown in locations where weevils are present. Research studies in Delaware, Maryland, and New Jersey have found that southern-grown peppers brought to repacking houses are a primary source of infestation for pepper weevils on locally grown peppers. Infested peppers discarded at retail outlets can also be a source of pepper weevils. Flying adults are the primary means for the spread of pepper weevils from field to field once they have been introduced to an area.2,3,5 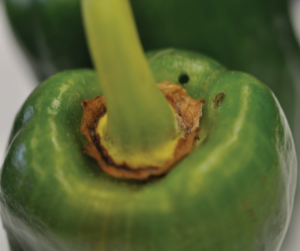 Female pepper weevils create holes in pepper buds or in the bases of young fruit. They lay their eggs in these holes and then seal them with a fluid that hardens and becomes dark brown. Three larval stages develop once the eggs hatch before the pupal stage occurs after two to three weeks. After three to six days the pupa becomes an adult. The life cycle, egg to adult, can take about 14 days to complete on pepper. A complete generation, egg to egg, takes 20 to 30 days, depending on the temperature, and three to five generations can occur in many pepper growing areas.1,3,4,5,6

Pepper weevils are difficult to manage once an infestation is established and larvae are present inside the fruit. A combination of pest exclusion, scouting, sanitation, and insecticide applications can be needed to minimize yield losses.2 In areas where pepper weevils can overwinter, field sanitation, weed management, and crop rotation are important. Crop free periods with destruction of alternate hosts (including solanaceous weeds) can eliminate larvae and pupae and lower weevil populations in an area.1 If possible, avoid planting peppers within one and a half miles of other solanaceous crops such as eggplant.8 In areas where pepper weevils do not usually overwinter, avoid planting near pepper re-packing or processing facilities. Inspect transplants for evidence of weevil infestation and avoid transplants produced in areas where weevils are commonly present.4

During the season, remove and destroy any fallen fruit. Control nightshade and other solanaceous weeds in and around the planting. After final harvest, promptly remove fruit from the field and destroy cull piles. Shred and disc pepper residue in the field as soon as possible.4 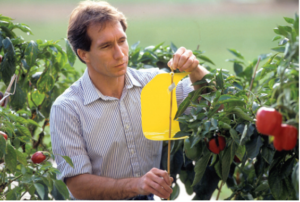 Scouting for pepper weevil should begin prior to flowering. Scouting involves looking for adult weevils through visual examination of plants or the use of pheromone-bated yellow sticky traps (Figure 3).1,4 Traps should be placed around the perimeter of the field at canopy height. Traps should be checked twice a week, more often if pepper weevils are known to be present in the area. The yellow sticky traps will capture other insects, including other weevil species, so it is important the person checking the traps knows how to correctly identify pepper weevils.5 Treatments with insecticides registered for management of pepper weevil on pepper should start when the first weevil has been captured. One weevil in a trap is indicative of approximately 8% fruit infestation.9 Scouting can also be done by visual inspection of the terminal buds of pepper plants, looking for adult weevils. Scouting should be done in the morning when weevils are present in higher numbers.10 Because adult weevils can be elusive and difficult to spot, one study suggested that an action threshold based on the percentage of bud damage is easier to use. Plants should be evaluated twice a week, as damaged buds abort and fall of the plants after a few days. Using this method, an action threshold of 5% bud damage is recommended.11

Once an action threshold has been reached and buds begin to form, insecticides should be applied at short intervals. Several insecticides are registered for control of pepper weevil on pepper, but efficacy is variable, and most of the insecticides will suppress the weevils but not completely eradicate them. Check local vegetable production or pest management guides for a list of registered insecticides. Some level of economic loss is common even with regular insecticide treatment.1,5,8 Insecticides are only effective against the adult stage of the weevil because immature stages of the weevil are protected within the buds or fruit.2 Rotate the use of insecticides with different modes of action to delay the development of insecticide resistance in the pepper weevil population.7 Many of the recommended insecticides are toxic to bees. Care should be taken to prevent the direct spraying blooming crops or allowing to spray drift reach blooming crops or weeds where bees are foraging.4

Performance may vary from location to location and from year to year, as local growing, soil and weather conditions may vary. Growers should evaluate data from multiple locations and years whenever possible and should consider the impacts of these conditions on the grower’s fields. The recommendations in this article are based upon information obtained from the cited sources and should be used as a quick reference for information about pepper insect pests. The content of this article should not be substituted for the professional opinion of a producer, grower, agronomist, entomologist, and similar professional dealing with this specific crop.

SEMINIS VEGETABLE SEEDS, INC. DOES NOT WARRANT THE ACCURACY OF ANY INFORMATION OR TECHNICAL ADVICE PROVIDED HEREIN AND DISCLAIMS ALL LIABILITY FOR ANY CLAIM INVOLVING SUCH INFORMATION OR ADVICE.