» Head rot of broccoli is caused by several different bacterial and fungal pathogens.
» The initial symptoms of head rot are water-soaking and discoloration of small groups of florets.
» Management of these diseases is based primarily on cultural practices, site selection, and using less susceptible varieties.

Necrosis or rotting of individual or clusters of broccoli florets is referred to as head rot. Head rot can be caused by several pathogens including several species of bacteria and a few species of fungi. The symptoms caused by these pathogens can be similar, and it can be difficult to tell them apart. However, the correct identification of the causal agent is important to ensure that the appropriate control procedures are used.

Symptoms of bacterial head rot start as water-soaked areas on small groups of unopened flowers on immature heads. These infected florets become necrotic and turn brown to black in color. The symptoms start to spread to surrounding florets and other areas of the head eventually affecting large sectors of the head (Figure 1). A soft rot develops in the infected tissues, meaning that the tissues turn soft and slimy. A bad odor is often associated with this rotting. After the initial infection, secondary bacterial and fungal pathogens can invade, causing further rotting of the tissue.1,2 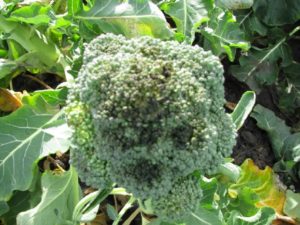 The bacteria that cause bacterial head rot overwinter in infested crop debris and possibly in the soil. Inoculum of the pathogens is spread by splashing water from rain or overhead irrigation or by insects. The development of bacterial head rot is favored by cool, wet conditions, including foggy weather. Symptoms often appear shortly after periods of rainfall.2 Water condensing on the leaves during dew formation also provides the conditions needed for infection. The disease most commonly starts in the areas of the head that collect water and stay wet the longest. The rotting can continue on heads in storage, even at low temperatures.3 In California, this disease most commonly occurs in the winter and spring growing seasons.

Managing bacterial head rot can be difficult. There are varietal differences in susceptibility to this disease. In particular, varieties that produce dome-shaped heads tend to be less susceptible than varieties with flat heads, as they shed water more easily.1 A three to five year rotation to non-brassica crops and the elimination of in-field cull piles can help reduce the abundance of inoculum in the field.2 Selecting fields with good drainage, planting on raised beds, and increasing plant to plant spacing will help keep plants dry and reduce the number and duration of infection periods. Delaying planting until temperatures start to warm will also help reduce the incidence of bacterial head rot.2,3 Avoid the use of overhead irrigation or schedule irrigations for times when the plants will dry quickly (mornings).3 Avoid over fertilization with nitrogen (N) on susceptible varieties. However, high rates of N do not seem to affect disease resistant varieties to the same extent as susceptible varieties.3 Bactericide applications have not been shown to be effective for controlling bacterial head rot. The surfactants present in many insecticide products (or recommended treatment aids) can increase the level of bacterial head rot, so insecticides should be applied prior to the onset of this disease in areas where it commonly occurs.3

Alternaria head rot, sometimes called pin rot, can be caused by several species of the fungus Alternaria, including Alternaria brassicae and Alternaria brassicola, and one or more of these species may be present, depending on the geographical location.

As with bacterial head rot, the initial symptoms of Alternaria head rot are single to small groups of florets that become water-soaked and discolored (Figure 2), eventually turning brown to black in color (Figure 3). The affected tissues will not be as soft or as smelly as tissues with bacterial head rot. With time, the fungus will produce dark green spores in the infected tissues. Secondary bacterial and fungal pathogens can come in on the damaged tissues, resulting in further decay of the heads. 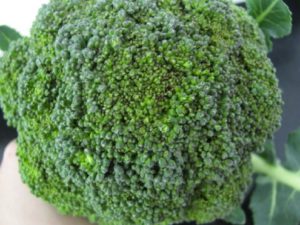 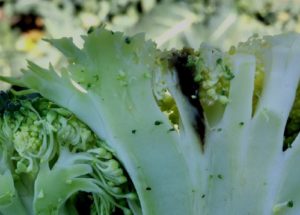 Both species of Alternaria can be seedborne, and they are dispersed by wind and by splashing water (rain or overhead irrigation).1 Wet weather promotes spore formation, and free moisture on the heads is favorable for spore germination and infection. The greatest period of spore dissemination occurs during warm, dry periods following a period of rainfall. So alternating rainy and dry periods are most favorable for disease development. In areas where winter and spring crops are grown near each other, the spores produce on the senescing tissues of the winter crop can spread to and infect the spring crop. The fungi can also survive on cruciferous weeds and volunteer plants, which can serve as sources of inoculum.2 As with bacterial head rot, in California, Alternaria head rot occurs most commonly during the winter and spring growing periods.

A three to four year rotation to non-host crops will help keep inoculum levels low.2 Because this disease can be seedborne, use seed with pathogen levels below the recommended threshold. There are some differences in varietal susceptibility to Alternaria head rot. Again, varieties with dome shaped heads tend to be less susceptible than are varieties with flatter heads.1 Avoid the use of overhead irrigation or reduce the use of overhead irrigation during periods of head formation.

Individual results may vary, and performance may vary from location to location and from year toyear. The information provided in this communication may not be an indicator of results you may obtain as local growing, soil and weather conditions may vary. Growers should evaluate data from multiple locations and years whenever possible. ALWAYS READ AND FOLLOW PESTICIDE LABEL DIRECTIONS. The recommendations in this article are based upon information obtained from the cited sources and should be used as a quick reference for information about bagrada bug on broccoli. The content of this article should not be substituted for the professional opinion of a producer, grower, agronomist, entomologist, and similar professional dealing with this specific crop.

SEMINIS DOES NOT WARRANT THE ACCURACY OF ANY INFORMATION OR TECHNICAL ADVICE PROVIDED HEREIN AND DISCLAIMS ALL LIABILITY FOR ANY CLAIM INVOLVING SUCH INFORMATION OR ADVICE. 161028160049 071717DME