» Downy mildew is one of the most destructive foliar diseases on cucumbers in eastern regions of North America.
» Downy mildew causes significant losses in both field and protected culture cucumber production systems.
» Management of downy mildew on cucumbers requires an integration of cultural, resistance, and chemical methods.

Downy mildew can affect plants of all ages, but in many growing regions it appears late in the season.1,2 The infection is mostly restricted to the leaves, but the resulting reduction in photosynthetic area causes stunting of plants, reduced yields, and sunscalding of the fruit following defoliation. Initial symptoms are small chlorotic spots on the upper leaf surface, often developing first on the older, crown leaves (Figure 1). The lesions expand and take on an angular shape as they are bound by the major leaf veins. The infected tissue eventually becomes necrotic (dead) leading to leaf death and defoliation. Gray to purple colored downy mold growth develops on the
undersides of leaves (Figure 1).

Downy mildew of cucumber is caused by Pseudoperonospora cubensis, a member of the water mold group (Oomycota) of fungal-like organisms. The downy mildew pathogen is an obligate parasite that needs living cucurbit plants in order to grow and survive. It does not overwinter on plant debris in most areas. In the U.S., the pathogen overwinters on live cucurbit plants in areas with mild winter climates or plants growing in greenhouse/protected culture environments. The pathogen is disseminated by windblown sporangia that can travel up to 600 miles in 48 hours on air currents.3

For the Eastern and Midwestern production areas, inoculum typically comes from southern Florida and Texas. Eastern and Midwestern growing areas, the pathogen arrives first in the more southern locations and makes its way northward, usually arriving in the Midwest and New York in late July, August, or September.4,5 Inoculum from infected, greenhouse-grown plants in the region may result in the disease showing up on field-grown plants earlier than would be expected.1,6

Downy mildew develops most rapidly during periods with moderate temperatures (59-68°F) and cool nights. Disease development is slowed by warm (>95°F) temperatures, while periods of fog, rain, and frequent dews are favorable for infection. Symptoms usually develop three to twelve days after infection, depending on the temperature and moisture levels present, with new sporangia formed in a little as four days.2

The management of downy mildew requires an integrated approach to reduce the periods of leaf wetness, avoidance of the disease by planting early in the season, the use of diseaseresistant varieties, and the application of fungicides. In regions where the pathogen does not overwinter, the occurrence of downy mildew is not affected by crop rotation or post-harvest sanitation.5

Minimizing periods of leaf wetness can lower the incidence and severity of downy mildew. Increasing airflow in the canopy by selecting sites with good air circulation, increasing plant spacing, or by trellising can help foliage dry more quickly.1,2 Avoiding overhead irrigation can help keep leaves dry and lower disease levels. In the Eastern and Midwestern parts of the U.S., downy mildew usually arrives later in the growing season. Thus, the disease can be avoided, or impacts on yield potential reduced by planting early. High disease pressure can substantially impact late-season plantings.4

Since 2004, severe epidemics of downy mildew have occurred on cucumbers in the eastern half of North America. These epidemics have been caused by new strains of the pathogen that can overcome previously effective forms of resistance.4

Improved intermediate resistance to downy mildew has become available in slicing and pickling cucumber varieties. This intermediate form of resistance should be used along with the application of effective fungicides to help ensure acceptable levels of control when disease pressure is high.7

Fungicide applications are most effective when used in combination with disease-resistant varieties and other methods of control. High spray pressures (75 psi) and high application volumes (75 gallons of water per acre) are needed to help ensure adequate spray coverage, and applications should be made before rain events, to provide time for treatments to dry.3

Several fungicides are available for controlling downy mildew, including both protectant and curative/systemic products. Protectants, including chlorothalonil, copper-based compounds, and mancozeb, can be used alone to protect against early season infections. Once the disease appears, systemic products that penetrate the tissue will be needed.4

The downy mildew pathogen can develop resistance to fungicides fairly quickly, and products that provided good control in the past may not be as effective as they once were. This includes fungicides containing mefenoxam (fomulations of Ridomil Gold®), and the QoI/strobilurin group of fungicides (formulations of Quadris®, Flint®, Cabrio®, Pristine®, and Reason®). These fungicides are no longer recommended for the control of downy mildew in most areas.4,8 Products including Presidio® Fungicide, Previcur® Flex Fungicide, Revus® Fungicide, Curzate® 60DF Fungicide, and DuPontTM Tanos® fungicide, are also less effective than they were in the past, but they can still provide useful control.4,8

As of 2021, the most effective products are those that contain oxathiapiprolin (formulations of Orodonis® [Opti, Ultra, Gold] Fungicide), cyazofamid (Ranman® 400SC Fungicide), and fluazinam (Omega® 500 F Agricultural Fungicide).4,8 To prevent or delay the development of new resistant strains, it is recommended (or required) that many curative/systemic fungicides be tank-mixed with a protectant fungicide and/or alternated with applications of fungicides that have different modes of action (FRAC groups). Some products are premixes of fungicides with different modes of action. Determining the need and frequency of fungicide applications can be improved by the use of disease forecast models, such as the one available at the Cucurbit Downy Mildew forecasting website.9

This site is part of the IPM-PIPE (Integrated Pest Management Pest Information Platform for Extension and Education) network. The cucurbit downy mildew forecast is based on the presence of the pathogen in or near an area and large-scale weather systems. Growers can subscribe to receive text or email alerts when outbreaks of downy mildew are confirmed in their area.2,9 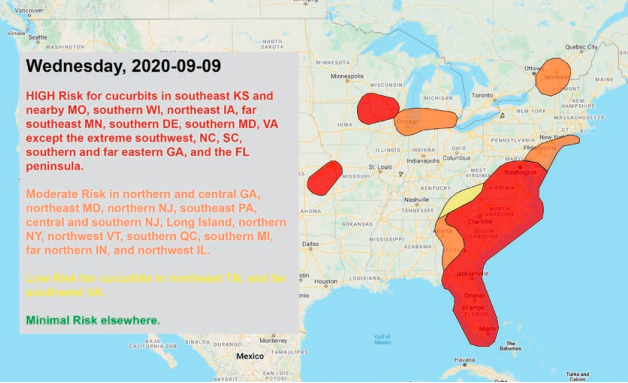 The forecast is based on an evaluation of the threat of inoculum production in source areas where the disease is present, and the risk of inoculum dispersal and disease development into areas along a projected trajectory of spread from the source areas (Figure 2). These risk evaluations are based on a number of parameters, including the amount of sporulation at the source, the potential for spore survival during transport (based on sunny vs. cloudy conditions), the potential for spore deposition (based on chances of rain), and the favorability of conditions for infection in the local area. The highest risk levels occur when conditions are cloudy with rainfall likely, which favor the survival and deposition of the downy mildew inoculum.

For additional agronomic information, please contact your local seed representative.
Performance may vary from location to location and from year to year, as local growing, soil and weather conditions may vary. Growers should evaluate data from multiple locations and years whenever possible and should consider the impacts of these conditions on the grower’s fields. The recommendations in this article are based upon information obtained from the cited sources and should be used as a quick reference for information about cucumber production. The content of this article should not be substituted for the professional opinion of a producer, grower, agronomist, pathologist and similar professional dealing with this specific crop.
BAYER GROUP DOES NOT WARRANT THE ACCURACY OF ANY INFORMATION OR TECHNICAL ADVICE PROVIDED HEREIN AND DISCLAIMS ALL LIABILITY FOR ANY CLAIM INVOLVING SUCH INFORMATION OR ADVICE.
9057_SE_S1 Published 06-30-2021

ALWAYS READ AND FOLLOW PESTICIDE LABEL DIRECTIONS. Not all products are registered in all states and may be subject to use restrictions. The distribution, sale, or use of an unregistered pesticide is a violation of federal and/or state law and is strictly prohibited. Check with your local dealer or representative for the product registration status in your state. Bayer Cross Design, Flint®, Previcur®, Seminis® and Reason® are registered trademarks of Bayer Group. For additional product information call toll-free 1-866-99-BAYER (1-866-992-2937) or visit our website at www.BayerCropScience.us. Bayer CropScience LP, 800 North Lindbergh Boulevard, St. Louis, MO 63167. All other trademarks are property of their respective owners. © 2021 Bayer Group. All rights reserved.