»The downy mildew pathogen typically infects broccoli plants early or late in the growing season.
»Disease resistance genes provide partial resistance to the seedling or mature plant phases of the disease.
»Fungicide applications may be needed to manage this disease.

Downy mildew of crucifers is caused by Hyaloperonospora brassicae, a fungal-like water mold. This pathogen can infect many Brassica species including broccoli, cabbage, cauliflower, mustard, radishes, turnips, and others. There is evidence of some host specificity within the species of the pathogen, with some strains able to infect some hosts better than others, but not much work has been done to characterize these differences.1,2,3

Broccoli plants can be infected by the downy mildew pathogen at any stage of growth. However, because the disease is favored by cool, wet conditions, infection occurs most frequently at the seedling stage and on mature plants late in the season.2 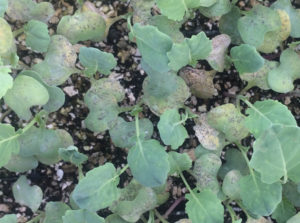 Symptoms on seedlings usually appear first as a yellowing of the cotyledons. If severe, the disease can result in the death of infected seedlings (Figure 1). 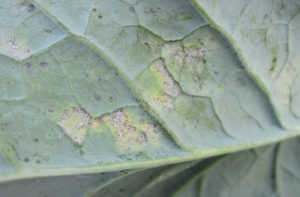 Figure 2. Foliar symptoms of downy mildew on broccoli showing the downy sporulation on the necrotic lesions.

On mature plants, symptoms occur mostly on leaves and the head (Figure 2). Small, angular, chlorotic spots develop on the upper sides of leaves and expand to form larger yellow areas bound by the larger veins, so they retain an angular shape. A whitish, “downy” sporulation forms on the underside of the leaf, especially during periods of high relative humidity levels and abundant leaf wetness.1 Gray to black spots may develop on the heads, and dark colored streaks can form on the stems. Infected heads are more susceptible to bacterial rotting than are heads not infected with downy mildew. 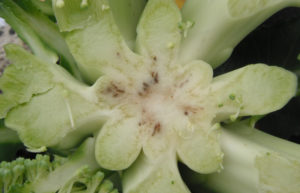 Systemic infections are thought to result from thick-walled resting spores of the pathogen that are present in the soil and infect through the root systems of young plants or from foliar infections at the seedling stage, but this has not been verified by research. With systemic infections, the pathogen grows and spreads through the vascular tissues of the plant, which results in dark discoloration of these tissues that can extend up into the stalks and heads (Figure 3).

The downy mildew pathogen forms thick-walled resting spores (oospores) in infested plant tissues. The oospores allow the fungus to survive in plant debris and in the soil when no susceptible host plants are present and possibly infect broccoli plants the following season. The pathogen can also overwinter on cruciferous crops and weeds. Under favorable conditions, the pathogen forms sporangia on infected plants, and these sporangia are easily blown by the wind or carried by splashing rain from plant to plant, spreading the disease. The formation and germination of sporangia and infection are favored by cool temperatures and periods of heavy fog or light rain that result in prolonged periods of leaf wetness.4 The disease occurs with night-time temperatures between 46-61°F and day-time temperatures below 75°F. Temperatures between 50 and 59°F are optimal for disease development.1,2,3

Because the pathogen that causes downy mildew of broccoli can overwinter in crop debris, crop rotation can be used to help manage this disease. A rotation of two to three years of non-cruciferous crops is recommended. 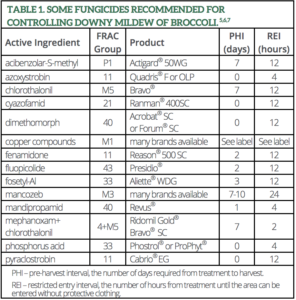 Destruction (incorporation) of crop debris and elimination of cruciferous weed hosts and volunteer plants will also reduce the amount of inoculum present. Avoid locating seed beds near plantings of other cruciferous crops. Do not put unused transplants in cull piles, as the disease can continue to develop on infected plants, which can then serve as a source of inoculum for nearby plantings.3

Use cultural practices that minimize periods of leaf wetness, including planting in areas with good air circulation and increasing plant spacing to allow for good air movement within the canopy and adequate sun exposure for each plant. Also, manage irrigation to reduce leaf wetness by watering in the morning, allowing the plants to dry before sunset, or by avoiding the use of overhead irrigation by using drip or furrow irrigation systems.1

Varieties with resistance to downy mildew are available. Some forms of resistance protect against infection of the cotyledons and young leaves, while other forms protect against the infection of mature plants. Several genes in broccoli have been identified for both of these types of resistance. There are, however, different races of the pathogen that can overcome some of these resistance genes, and none of the genes identified so far are effective against all known races of the pathogen.4 For this reason, some seed companies no longer identify varieties as being resistant to downy mildew, even when the varieties have genes for resistance. Varieties, such as the Seminis variety Heritage, show good resistance to infection at the seedling stage, but develop symptoms on leaves of mature plants at the end of the season. However, these late-season lesions do not significantly impact yield or head quality.

The application of fungicides is needed, especially for susceptible varieties, when the disease occurs. Apply protectant fungicides, such as chlorothalonil, mancozeb, or copper-based products, before disease develops, when conditions are favorable for disease spread and infection.3 Table 1 lists some of the fungicides recommended in extension vegetable production guides.5,6,7 Copper-based products can be used to manage downy mildew on broccoli, but they are often not as effective as some of the other available products.2 Always carefully read and follow the instructions provided on product labels.

Individual results may vary, and performance may vary from location to location and from year to year. The information provided in this communication may not be an indicator of results you may obtain as local growing, soil and weather conditions may vary. Growers should evaluate data from multiple locations and years whenever possible. ALWAYS READ AND FOLLOW PESTICIDE LABEL DIRECTIONS. The recommendations in this article are based upon information obtained from the cited sources and should be used as a quick reference for information about downy mildew of broccoli. The content of this article should not be substituted for the professional opinion of a producer, grower, agronomist, pathologist and similar professional dealing with this specific crop.

SEMINIS DOES NOT WARRANT THE ACCURACY OF ANY INFORMATION OR TECHNICAL ADVICE PROVIDED HEREIN AND DISCLAIMS ALL LIABILITY FOR ANY CLAIM INVOLVING SUCH INFORMATION OR ADVICE. 160908111719 110816DME