Black rot is caused by the bacterium Xanthomonas campestris pv. campestris, and it is one of the most important diseases of vegetable brassicas worldwide (Figure 1).1 The bacterium can be seedborne and can spread on infected seedlings. It is spread by splashing rain, insects, and contaminated equipment. Management of black rot focuses on sanitary cultural practices. If symptoms of black rot have been observed on any brassica crops, including canola, a two- to three-year rotation away from brassicas should be implemented. Cruciferous weeds, such as mustard, wild radish, and shepherd’s purse, should be controlled during the rotation period.2,3 Avoid planting where debris from brassica crops have been dumped, and do not plant in fields immediately following a brassica crop (double cropping), especially if black rot was present. 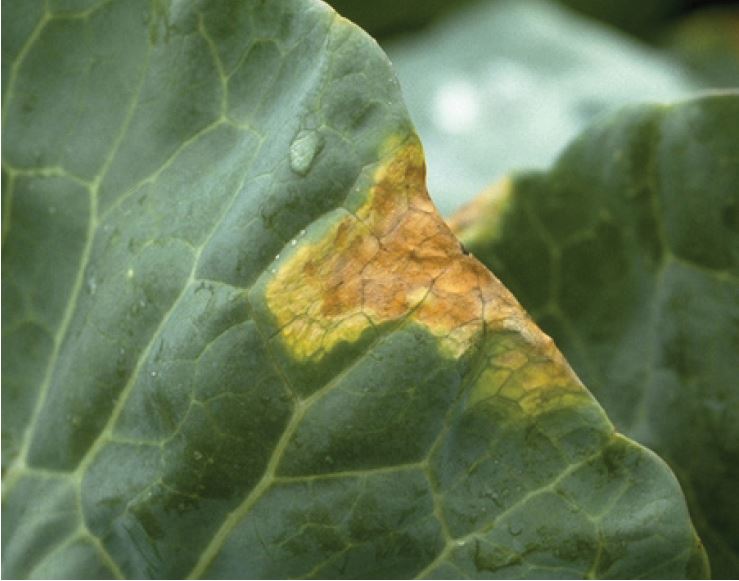 Use healthy seed and transplants, and prevent the infection of seedlings during transplant production. Clipping or mowing seedlings before transplanting can result in widespread infection of transplants.1,2,3 Do not allow workers or equipment to enter a field when plants are wet if black rot symptoms are present. Thoroughly clean equipment that has been used in fields with black rot. Avoid overhead irrigation, if possible, and do not irrigate with water that may be contaminated with surface runoff from infested fields.1,2

Applications of fixed copper compounds (copper sulfate, copper hydroxide, and others) can reduce the spread of black rot, but they may not be effective during persistently wet conditions.1,4 The addition of mancozeb or maneb can enhance the activity of copper products against black rot.5 Insect wounds can serve as a site of infection for black rot, so managing insects in cauliflower will help manage black rot. Incorporate crop debris promptly after harvest to speed the reduction of inoculum for future crops.

The soilborne organism Plasmodiophora brassicae causes the disease clubroot. The pathogen can survive in the soil for up to 20 years in the absence of a susceptible host. The disease develops most quickly in warm, moist, acidic soils. The disease causes swelling and distortion of root systems (Figure 2). The most important management strategy is to prevent the introduction of the pathogen into healthy fields by planting only healthy transplants and by thoroughly cleaning equipment before using it in a healthy field. Avoid poorly drained fields with a history of the disease, and avoid planting in fields where brassica crop debris has been dumped. Practice a three- to five-year rotation between brassica crops to reduce the chances of the pathogen becoming established. Rotating to corn or alfalfa has been shown to lower clubroot inoculum levels.1,4 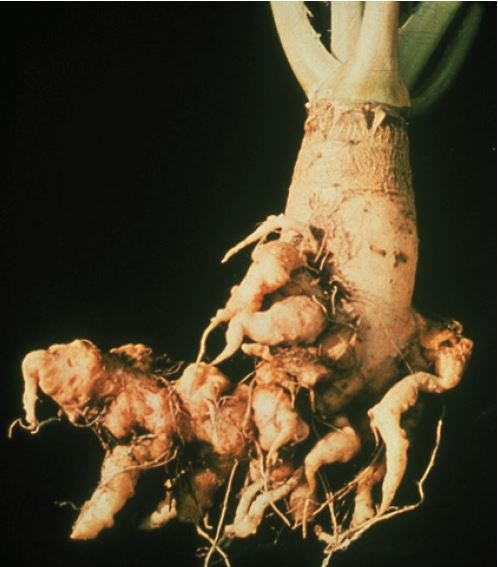 If clubroot is present, increase the soil pH to 7.2 with ground limestone. This practice is effective in fields that are mostly pathogen-free but have a few small infected areas. Raising soil pH is not very effective when pathogen populations are high.1,2 The form of lime can impact the effectiveness, with calcium cyanimide one of the more effective treatments. Annual applications of lime may be needed.1 Green manuring, the application of organic soil amendments, and soil solarization can also lower inoculum levels or reduce clubroot inoculum viability. Some soil fungicides have been shown to lower the incidence and severity of clubroot including cyazofamid, fluazinam, and PCNB.4

Downy mildew is caused by the fungus-like organism (Hyaloperonospora parasitica), which is an obligate parasite, needing live plants to grow and reproduce. The disease affects leaves (Figure 3), stems, and heads of cauliflower. The pathogen can survive on crop and weed hosts in some areas and may survive as spores in infested crop debris. The disease is favored by moist conditions with temperatures near 60° to 70°F. 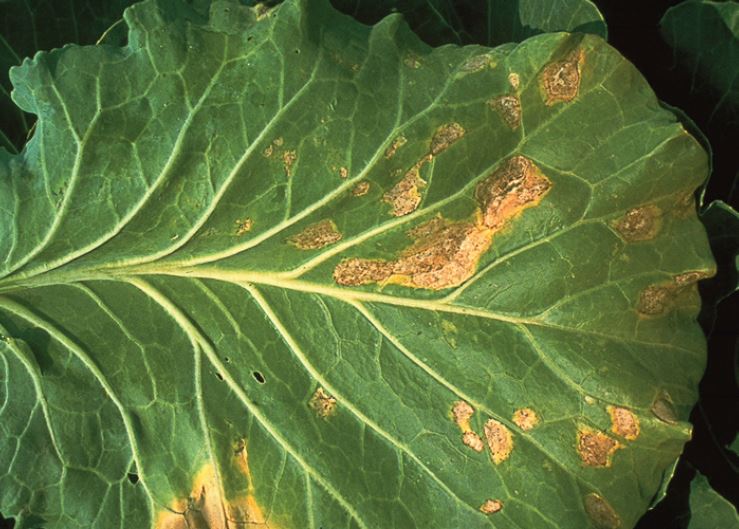 Management programs for downy mildew should include a rotation away from brassica crops (including cover crops and canola) for at least three years. Plant cauliflower in well-drained fields with good air circulation to reduce the likelihood of infection. Reduce periods of wet foliage by lowering planting densities and managing irrigation schedules. Avoid overhead irrigation if possible, and do not irrigate using sources of water that may be contaminated with the pathogen. Destroy crop debris promptly after harvest.1,2

Fungicide applications may be necessary in some areas, and many fungicides are registered for use on cauliflower for management of downy mildew. Consult regional production guides for currently registered products.2,4,5 Fungicides from different FRAC groups (fungicides with different modes of action) should be mixed or applied in alternation to suppress the development of fungicide-resistant populations of the downy mildew pathogen. Pathogen resistance to metalaxyl is common, limiting the effectiveness of this fungicide.1,2 Host resistance to downy mildew is not currently available in commercial varieties of cauliflower.

The white mold fungus Sclerotinia sclerotiorum (Figure 4) has a very wide host range, including many non-brassica crops, and the fungus can survive for several years in the soil in the absence of host crops. Infection is favored by periods of cool (near 60°F) conditions with wet soils near saturation. 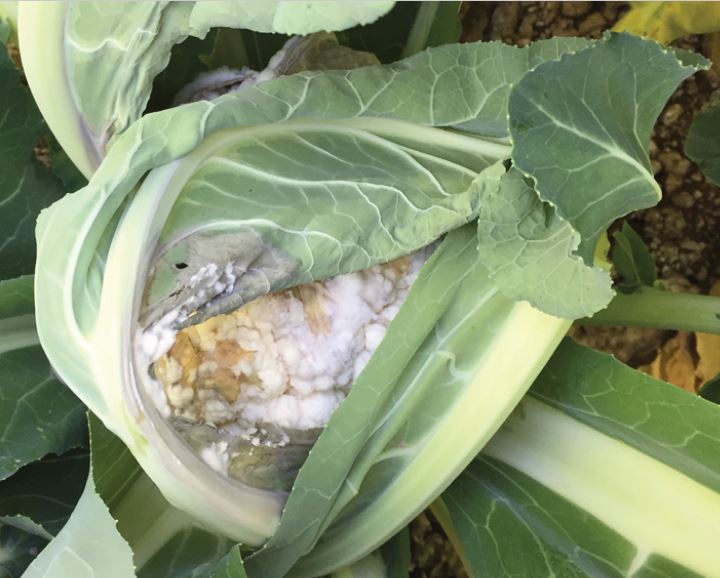 Crop rotation cycles of at least three years away from brassica and other host crops is needed to lower inoculum levels. Other host crops include soybeans, beans, peas, tomatoes, eggplant, peppers, lettuce, carrots, and cucurbits. Grain crops, such as wheat, corn, and sweet corn are not hosts for the pathogen and, therefore, are good rotational crops. Avoid planting in weedy fields with ragweed or velvet leaf. Promote good air circulation by using moderate seeding rates and wide row spacings. Do not overfertilize, and avoid mechanical damage to plants as wounds can serve as a site of infection.1,2

Several fungicides are registered for Sclerotinia stem rot (white mold) on cauliflower including boscalid and penthiopyrad. However, fungicides are usually not needed in areas with warmer, drier conditions. Treatment of the soil with the biological control fungi Coniothyrium minitans and species of Trichoderma have been shown to effectively lower inoculum levels of Sclerotinia. However, the agents need to be applied to the soil well before the start of the season to be effective. For heavily infested fields, deep plow crop debris, treat fields with Coniothyrium minitans immediately after harvest and rotate to non-host crops.1,2,3

The fungus that causes Verticillium wilt also has a large host range that includes many cultivated and weed species. Structures called microsclerotia, produced by the pathogen, can survive in the soil for many years. Long-term crop rotations to non-hosts, such as cereal crops, are needed to lower pathogen populations. Soil fumigation has been shown to be feasible in some situations, but results on effectiveness have been mixed in field trials. Broccoli is not a host for Verticillium, and broccoli residues incorporated into the soil can be used as a form of biofumigation to lower inoculum levels of Verticillium.3 Avoid introducing the pathogen into non-infested fields on contaminated equipment. Currently, there are no cauliflower varieties that are designated as resistant to Verticillium wilt, but some varieties may be more tolerant to the disease than others.3

Performance may vary from location to location and from year to year, as local growing, soil and weather conditions may vary. Growers should evaluate data from multiple locations and years whenever possible and should consider the impacts of these conditions on the grower’s fields. The recommendations in this article are based upon information obtained from the cited sources and should be used as a quick reference for information about cauliflower diseases. The content of this article should not be substituted for the professional opinion of a producer, grower, agronomist, pathologist and similar professional dealing with this specific crop.

SEMINIS DOES NOT WARRANT THE ACCURACY OF ANY INFORMATION OR TECHNICAL ADVICE PROVIDED HEREIN AND DISCLAIMS ALL LIABILITY FOR ANY CLAIM INVOLVING SUCH INFORMATION OR ADVICE. 180626072813 092118DME