Managing The Bagrada Bug In Broccoli

Managing The Bagrada Bug In Broccoli

» The bagrada bug is a relatively new pest of broccoli in the United States.
» The pest has been detected in the U.S. from central California to Texas and in Hawaii.
» Broccoli plants are most susceptible to damage in the seedling stage. The bagrada bug, or painted bug, is a species of stink bug native to Africa that spread to India and Asia.

Bagrada bug is an invasive insect species in the U.S., first detected in the U.S. in Los Angeles in 2008. Since then, the bagrada bug has spread throughout southern California, into central California, and eastward into Nevada, Arizona, New Mexico, and Texas. Bagrada bug is also now present in Hawaii and northern Mexico. It is becoming a major pest on fresh-market brassica crops grown in these areas.1,2

Adult bagrada bugs are black with orange and white markings. They have shield-shaped bodies that are 3/16 to 1/4 of an inch long by 1/8 of an inch wide, and the females are generally larger than the males (Figure 1). Although bagrada bugs are similar to harlequin bugs in appearance, they are about one third of the size.1,3 Further, bagrada bugs have piercing, sucking mouthparts that they use to suck the sap out of leaves and stems. 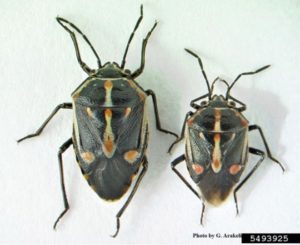 Bagrada bugs lay eggs on the undersides of leaves, on stems, and in the soil around plant stems, and they can even lay eggs on the stems of non-host plants, screens, and row covers. Although their eggs are initially cream-colored, the eggs turn orange-red with age. Five immature stages develop before the bagrada bugs mature into adults, and the number of generations produced per year depends on the climatic conditions of the region.

Bagrada bugs prefer to feed on cool season crops, especially those in the Brassicaceae (the mustard family), but their development is favored by warm temperatures, with populations peaking late in the summer and early fall in areas such as southern California. During the winter months, adults hide in the leaf litter and topsoil. In the spring they begin colonizing brassica weeds, such as wild mustard, and then move into production crops as those are planted.

Bagrada bugs are significant pests of broccoli, cabbage, cauliflower, collards, kale, turnip, mustard greens, radish, broccoflower, and arugula. In addition, bagrada bugs also feed on cucumber, corn, okra, sugarcane, papaya, potato, cotton, figs, certain legumes, and ornamentals such as alyssum, candytuft, nasturtiums, rockcress, stock, and wallflower.1,3,4 Grower estimates of losses on broccoli in Arizona are from 15% to 30% due to delayed harvests and damage to the growing points of the plant.4

Seedlings in the cotyledon stage are the most susceptible to damage from bagrada bugs, and heavy feeding can result in plant death.2,4 Plants surviving bagrada bug feeding will likely be stunted and spindly. Feeding by bragada bugs on the growing points of more established plants results in the formation of multiple heads (Figure 2), which may be unmarketable, or “blind plants” with no head formation. Feeding by bagrada bugs on leaves, cotyledons, and stems produces characteristic starburst lesions, and affected leaves may wilt, become scorched, and die. 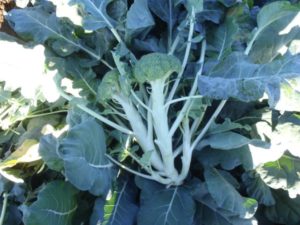 One management option that can help reduce damage by bagrada bug is to use cultural control practices, including removal of weed hosts, removal or incorporation of crop debris after harvest, and growing plants in protected culture systems (e.g., low tunnels and row covers). With protected culture, the mesh of the covering must be fine enough to exclude the nymphs, but even then bagrada bugs can feed through row coverings when the covering is laying directly on the plants. It is also important to bury the cover edges to prevent the bugs from crawling under the row or tunnel cover.1

Broccoli plantings in areas where bagrada bugs are present should be scouted regularly. Regular scouting can enable early detection of the presence of bagrada bug, which is imperative to control of this insect pest because populations can increase rapidly.1,2 Infestations may first be evident on plants adjacent to weedy areas with wild mustard, so these areas should be a focus of scouting efforts, and the frequency of scouting should increase when temperatures rise above 75°F. Counting adults can be difficult in the cool, early part of the day before bagrada bugs become active, and they may hide in soil cracks on cool, cloudy days. Fresh feeding damage has been shown to be highly correlated to populations of adult bagrada bugs, so one recommendation is to scout fields for feeding damage early in the day and to scout fields to count adult bagrada bugs during the warmer parts of the day.2

The recommended action thresholds for bagrada bug are 5% of plants showing fresh feeding damage or counts of one adult bagrada bug per three feet of row for seedlings and transplants.2,5,6 When counts of feeding damage or adult bagrada bugs exceed these thresholds, then additional action will be needed to control this pest. However, these thresholds may not be sufficient for early stages of direct seeded broccoli, as a few adults and nymphs can cause significant damage on young seedlings. For direct seeded broccoli, it is recommended to prophylactically protect seedlings with insecticides for the first week after emergence, after which time a scouting program can begin.

Another tactic for bagrada bug management is insecticide application. In areas where bagrada bugs are present, growers primarily rely on insecticide applications to protect their crops. Treatments need to be effective at preventing feeding on cotyledons and terminal buds. Products can vary in their ability to quickly knock-down bagrada bug populations and in their residual effectiveness in the days following application. Some of the available insecticides that are effective against the bagrada bug and registered for use on broccoli also have the ability to control silverleaf whiteflies. Growers should consult local extension recommendations and regional commercial vegetable production guides to learn more about insecticides that are registered for use on broccoli and effective for managing bagrada bug in the local growing area.5,6,7,8 Notably, the insecticides currently recommended for managing the bagrada bug on broccoli are susceptible to the development of resistance, and it is recommended that applications of products belonging to specific mode of action classes be alternated or applied in combination as tank mixes or product mixes with recommended insecticides belonging to different classes.

Individual results may vary, and performance may vary from location to location and from year to year. The information provided in this communication may not be an indicator of results you may obtain as local growing, soil and weather conditions may vary. Growers should evaluate data from multiple locations and years whenever possible. ALWAYS READ AND FOLLOW PESTICIDE LABEL DIRECTIONS. The recommendations in this article are based upon information obtained from the cited sources and should be used as a quick reference for information about bagrada bug on broccoli. The content of this article should not be substituted for the professional opinion of a producer, grower, agronomist, entomologist, and similar professional dealing with this specific crop.

SEMINIS DOES NOT WARRANT THE ACCURACY OF ANY INFORMATION OR TECHNICAL ADVICE PROVIDED HEREIN AND DISCLAIMS ALL LIABILITY FOR ANY CLAIM INVOLVING SUCH INFORMATION OR ADVICE. 161028155723 062017DME