Management Of Fusarium Wilt In Watermelon

Management Of Fusarium Wilt In Watermelon

» Fusarium wilt is one of the most economically damaging diseases of watermelon.
» The fungal pathogen can remain viable in the soil for up to 20 years.
» Using resistant varieties, healthy transplants, and grafting onto resistant rootstocks are effective management options.

THE DISEASE AND PATHOGEN

Fusarium wilt is one of the most economically important diseases of watermelon. The disease is present worldwide, and it can result in yield losses nearing 100% when severe.1 The pathogen that causes this disease is the fungus Fusarium oxysporum formae specialis niveum (FON). Formae specialis niveum indicates the version of the pathogen that specifically infects watermelon. There are other formae speciales of Fusarium oxysporum that infect other crops, but they are generally not pathogens on watermelon.

There are four known races of FON, distinguished by their ability to infect watermelon varieties with different resistance genes (Table 1). Race 0 is only able to infect varieties with no specific resistance genes, while Race 1 can overcome the resistance gene present in the variety “Sugar Baby”. Many commercial cultivars have some form of resistance to Fusarium wilt, and Race 1 is now the most prevalent race in the U.S. Race 2 causes severe disease on almost all commercial cultivars and is present in at least eight states including Delaware, Florida, Georgia, Maryland, Oklahoma, South Carolina, and Texas. Race 3, which can overcome the Race 2 resistance gene, was recently detected in Maryland.2 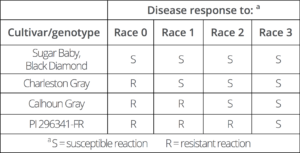 FON is able to survive in the soil for 15 to 20 years in the absence of a susceptible watermelon plant. So once the pathogen is introduced into an area, it is very difficult to get rid of completely. The fungus infects the roots and then enters the xylem (water conducting tissue) of the plant. The presence of the fungus in the xylem restricts the flow of water and nutrients, resulting in the wilting of the plant.

Although the disease has been a problem for many years, Fusarium wilt has become increasingly important in the past few years for several reasons. Many watermelon varieties have some resistance to Fusarium wilt, but the presence of new races of the pathogen have reduced the effectiveness of those resistance genes. In addition, the phase out of methyl bromide has significantly curtailed the use of soil fumigation as a control strategy.

Initial symptoms of Fusarium wilt include leaves turning a dull gray-green color and wilting during the heat of the day. Older leaves tend to wilt first, and the wilt can be unilateral, affecting only one or two vines on a plant. Vines that wilt during the day initially recover at night, but eventually the wilt becomes permanent, leading to plant death. Brown streaking can be seen in the vascular tissue of the lower stem and spreading into the vines (Figure 1). The fruit that form on infected plants are often small and misshapen, and they tend to crack or sunburn with age.1 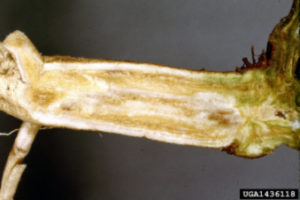 Because FON is soilborne, infected plants often occur in clusters (foci) within a field, and the size of these clusters gradually increase from year to year as the pathogen spreads in the soil. Symptoms of Fusarium wilt are similar to those of other vascular wilt diseases, such as Verticillium wilt, so tests may be needed to verify the cause of the disease.

Conditions that favor the development of Fusarium wilt include light and sandy soils, acidic soils, the use of nitrate (NO3) based fertilizers, and the presence of plant parasitic nematodes, such as root knot nematodes. Infection of the roots is favored by cool, moist conditions in the spring, but expression of the wilt symptoms is most pronounced during warm dry periods, when water demands on plants increase.3

Infected transplants can result in significant levels of disease developing in the field, so transplants should be inspected for symptoms of the disease prior to planting. Seedling trays should be discarded or thoroughly sanitized before being reused to prevent the infection of the next crop of transplants.1 While the pathogen has been shown to survive on seed, it is not clear if seed transmission plays a significant role in disease development.

It is also important to prevent the spread of the pathogen into new areas on tools and equipment. Tools and equipment should be cleaned to remove any soilborne inoculum before being used in non-infested fields.

An effective method of managing Fusarium wilt is to use wilt resistant varieties. Most commercial diploid (seeded) and some triploid (seedless) varieties are resistant to Races 0 and 1.4 Resistance can be overcome in locations with high pathogen populations and by other conditions that favor disease development.5 Currently, there are no commercial, red-fleshed watermelon varieties with resistance to either Race 2 or Race 3.

Another form of disease resistance is to graft watermelon plants onto bottle gourd or squash rootstocks that are resistant to Fusarium wilt.6 Because the pathogen infects through the roots, a resistant rootstock prevents infection of the susceptible scion. Grafting can effectively protect plants from several races of FON, and grafter plants produce higher yields than non-grafted plants in FON-infested fields. Grafting is used extensively in some watermelon growing regions such as Europe. However, grafting is labor intensive and costly, so the practice has not been widely adopted in the U.S.

Although FON can remain viable in the soil in the absence of susceptible watermelon plants for up to 20 years, long term crop rotation is an important strategy for managing this disease. The main goal of crop rotation is to prevent the buildup of inoculum in the soil. One study found that soil inoculum levels drop by 20% after one year, by 40% after two years, and by 50% after 3 years out of watermelon.2 It is recommended that watermelon should only be planted in a field once every five to seven years, and watermelons should never be planted in the same location two years in a row.

In the past, soil fumigation with methyl bromide was used routinely in some areas to lower inoculum levels in the soil, and alternatives to methyl bromide are available now that it can no longer be used for this purpose in the U.S. However, fumigation is expensive, and the effects are only temporary. There has been some progress in the use of fungicides to manage Fusarium wilt. One study showed that multiple applications of fungicides such as prothioconazole (Proline® 480 SC), applied through a drip irrigation system, lowered the level of wilt that developed.7 Only fungicides labeled for the control of Fusarium wilt on watermelon should be used for this purpose, and all label directions should be followed.

Individual results may vary, and performance may vary from location to location and from year to year. The information provided in this communication may not be an indicator of results you may obtain as local growing, soil and weather conditions may vary. Growers should evaluate data from multiple locations and years whenever possible.  ALWAYS READ AND FOLLOW PESTICIDE LABEL DIRECTIONS. The recommendations in this article are based upon information obtained from the cited sources and should be used as a quick reference for information about watermelon and Fusarium wilt. The content of this article should not be substituted for the professional opinion of a producer, grower, agronomist, pathologist and similar professional dealing with these crops.

SEMINIS DOES NOT WARRANT THE ACCURACY OF ANY INFORMATION OR TECHNICAL ADVICE PROVIDED HEREIN AND DISCLAIMS ALL LIABILITY FOR ANY CLAIM INVOLVING SUCH INFORMATION OR ADVICE. 160330083927 DME061316