» Aphids, leafhoppers, and stink bugs are insect pests that feed on beans using piercing-sucking mouthparts.
» Feeding can result in tissue damage and draining of plant resources.
» These insects can also spread viral diseases to bean plants.

Aphids are soft bodied insects that are round to oblong and 1/16th to 1/8th inch long. Aphids vary in color from green, to black, brown, red, pink, and other colors, depending on the color of the sap that they are feeding on.1,2 They have slender antennae and two tubes-like structures (cornicles) protruding from their back ends (Figure 1). Several species of aphids feed on snap beans, and both wingless and winged (alate) forms can be present. Winged forms develop when conditions favor migration to another host. Aphid colonies develop primarily on the undersides of leaves, on shoot terminals, and flowers.1,3,4

Aphids suck the sap out of plants, and their feeding may cause wilting and distortion of developing leaves and stems. Heavy feeding can result in stunting of pants and delays in maturity. However, aphid feeding, on its own, rarely results in significant damage.1,2,4

As aphids feed, any excess sap is excreted as honeydew, which covers plant surfaces, including leaves and fruit, making them sticky. The presence of honeydew also promotes the growth of darkly colored sooty mold fungi, which can cover plant surfaces and be difficult to remove. The greatest effect of aphids on beans results from the transmission of viruses. Aphids vector several bean viruses, including cucumber mosaic virus and alfalfa mosaic virus. The action threshold for aphids on snap beans has not been established. Aphids are usually controlled by natural enemies, but insecticides may be needed if populations are high. Insecticides are not usually effective for slowing the aphid transmission of most viruses on beans.

The primary leafhopper of concern to bean producers is the potato leafhopper. Adult and nymph potato leafhoppers are yellow-green to lime-green in color and often have a characteristic sideways walking behavior. Adults are wedge-shaped, widest at the head with tapering wings, and 1/8th inch long (Figure 2). Nymphs are similar to adults in appearance, except that nymphs are wingless.3,4

Leafhopper feeding results in disruption of vascular tissue function, and damage is most severe with feeding on younger plants. Affected plants may be stunted and show symptoms of “hopperburn”, which includes curling and yellowing of the leaves and whitening of the leaf veins. Eventually leaves wilt, turn brown, and become desiccated. Pod yield and quality can be reduced on affected plants.3,4 Leafhopper populations can be monitored using sweep nets or yellow sticky traps. Nymphs are most often found on the undersides of leaves in the lower half of the canopy.4 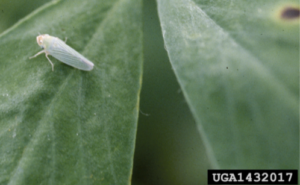 Adult stink bugs are shield-shaped insects that are 0.4 to 0.7 inches long and half as wide. They have piercing-sucking mouthparts, and their feeding results in distortion, pitting, and blemishes on bean pods.6 Southern green stink bugs, brown stink bugs, and brown marmorated stink bugs all feed on snap beans, and their presence varies by growing region.

The southern green stink bug is bright green (Figure 3) and gives off a bad odor when disturbed or crushed. They will feed on bean leaves, but they prefer to feed on pods where they create clear, water-soaked lesions.1 For this pest, insecticide treatments should begin in the bloom stage if counts reach an average of one bug per ten feet of row. 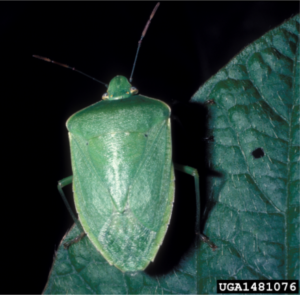 The brown marmorated stink bug (BMSB) is a relatively new pest, introduced into the U. S. in the mid-1990s that has since spread to many bean growing areas in the U. S. and Canada. This insect has a wide host range, feeding on over 170 species of plants including many tree fruit and vegetable species.7,8 Adults are shield-shaped, 0.7 inches long, and are various shades of mottled brown on their upper and lower surfaces. The BMSB has rounded shoulders (Figure 4), compared to the brown stink bug that has pointed shoulders (Figure 5). 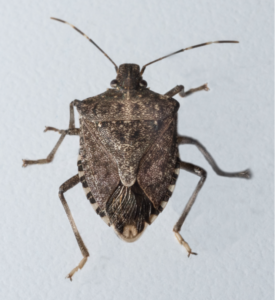 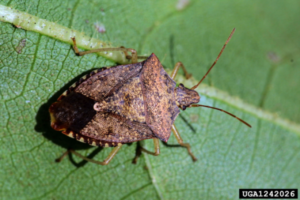 The BMSB also has light colored bands on the antennae and sometimes on the legs.8 Plants adjacent to wooded or areas are most at risk for BMSB feeding, and treating just field borders can be as effective as treating whole fields in some casees.7,9 Insecticides that work well for other stink bug species may not be effective against BMSB, especially late in the season.

Performance may vary from location to location and from year to year as local growing, soil and weather conditions may vary. Growers should evaluate data from multiple locations and years whenever possible and should consider the impacts of these conditions on the grower’s fields.   ALWAYS READ AND FOLLOW PESTICIDE LABEL DIRECTIONS. The recommendations in this article are based upon information obtained from the cited sources and should be used as a quick reference for information about bean insect pests. The content of this article should not be substituted for the professional opinion of a producer, grower, agronomist, pathologist and similar professional dealing with this specific crop.

SEMINIS DOES NOT WARRANT THE ACCURACY OF ANY INFORMATION OR TECHNICAL ADVICE PROVIDED HEREIN AND DISCLAIMS ALL LIABILITY FOR ANY CLAIM INVOLVING SUCH INFORMATION OR ADVICE.  180320081037 042018DME