» Insects and mites can significantly reduce yield potential and melon quality.
» Appropriate control strategies are based on accurate identification of the pest.
» A combination of cultural and chemical management methods are available for most insect pests of melons.

The greenhouse whitefly and the silverleaf whitefly are both economically important for melon production.1 Both species are small (<16th of an inch long) flies with powdery white wings.2 The greenhouse whitefly is found mostly in greenhouses and other protected environments in temperate regions, while the silverleaf whitefly is found mostly in tropical and subtropical areas, as well as in greenhouses.3 At rest, the silverleaf whitefly holds its wings vertically tilted (roof-like) and the wings do not meet over the back (Figure 1). Greenhouse whiteflies hold wings flatter, and there is no space where wings meet over the back.1 The adults and nymphs reside mostly on the undersides of leaves. Affected plants are stunted and have low productivity. Whiteflies produce a thick, sugary secretion called honeydew, which can make the leaves and fruit sticky and promote the growth of dark-colored sooty mold fungi. Fruit covered with sooty mold growth are unmarketable.1,2,3 Whiteflies also vector some important melon viruses. 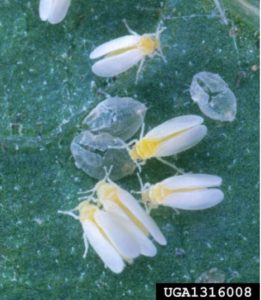 Make sure that transplants are not infested before planting, and avoid planting near older fields of host crops (cole crops, cotton, cucurbits, or tomatoes). Reflective mulches can help repel whiteflies early in the season. Row covers can be used as physical barriers, but they must be removed prior to flowering.2,3 Monitor whiteflies by using yellow sticky traps or by examining the undersides of young, fully expanded leaves early in the morning. If adults are found on more than 50% of the leaves, insecticide treatments may be needed. However, broad-spectrum insecticides can harm natural enemies of whiteflies, resulting in increased whitefly numbers. Insecticidal soaps and oils, such as Organic JMS Stylet-Oil®, can also help manage whiteflies.1,2,3 Using insecticides to control whiteflies is usually not effective for preventing transmission of the viruses they vector because the viruses move into the plants before there is time for the insecticides kill the whiteflies.

Melon aphids have soft, ovoid bodies that vary in color from pale yellow to green to black and are up to 1/16th of an inch in length.2,4 They have black cornicles (posterior tailpipes), eyes, and leg joints, and occur in winged and non-winged forms.2,5 Aphids usually start to colonize the undersides of melon leaves when plants start to form runners.1,4 Heavy feeding can result in young leaves becoming distorted, thickened, and curled. Aphids also produce honeydew, which makes leaves and fruit sticky and promotes the growth of dark sooty mold fungi.1,2,4 Melon aphids can also vector several important melon viruses.

Melon aphids are normally controlled by natural enemies, but outbreaks can result from insecticide applications that reduce the populations of beneficial insects.4 If possible, delay planting in the spring until temperatures reach 80°F and spring aphid flights are completed. Preserve habitats of beneficial insects and avoid planting melons near cotton and other host crops.1,2 Reflective mulches can help repel aphids when plants are small, and row covers can be used to prevent colonization prior to flowering. Soil applications of neonicotinoid insecticides have been effective at controlling aphids on melons. With localized infestations, colonized plants can be spot treated with insecticides or removed and destroyed.1,2,3 Rosemary oil, neem oil, and insecticidal soaps can help manage aphids in organic production systems.3,6 Using insecticides to control aphids is usually not effective for preventing the transmission of aphid vectored viruses.

Cucumber beetles (striped, spotted, and banded) can feed on melon plants, causing damage and transmitting the bacterial wilt pathogen. Striped cucumber beetles are most problematic east of the Rocky Mountains, while Western striped cucumber beetles occur west of the Rockies.3 Striped beetle adults are 1/5- to 1/4- inch-long and have yellow wing covers with black longitudinal stripes (Figure 2). The head and abdomen are black. Western striped beetles are about 1/3-inch long and have yellow to greenish wing covers with alternating black and yellow stripes.2,4,5 Both the striped and western striped beetles can overwinter in northern areas. Spotted cucumber beetle adults have yellowish-green wing covers with 12 black spots, black head and thorax and yellow abdomen. These beetles overwinter in southern areas and migrate northward during the season. Adult banded cucumber beetles are yellowish-green with three bright green bands running across the wing covers. These beetles are found mostly in southern growing regions.1,4 Larvae feed on roots and can kill young seedlings. Adults prefer to feed on leaves and flowers, but they can feed on fruit, causing damage to fruit surfaces, especially on smooth-skinned melons (honeydew, Crenshaw, casaba).1,4,5 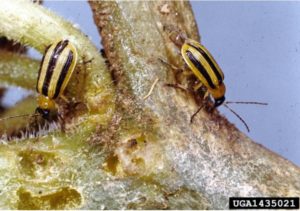 Row covers can be used to keep cucumber beetles from feeding on young plants, but the covers need to be removed before flowering.3 Cucumber beetle control often relies on the application of insecticides once beetle populations have reached the action threshold. Scouting for cucumber beetles should begin shortly after planting. Scout twice a week early in the season, examining the undersides of cotyledons and young leaves. Treatment may be needed when counts reach one beetle per plant in the seedling stages. Older plants can tolerate higher populations.1,5 Insecticide sprays should be directed at adult beetles, which are most active at dawn and dusk.1,5 Neonicotinoid insecticides applied in-furrow or to transplants at planting can help protect young seedlings.3 Foliar applications of approved insecticides may be needed to protect plants during the season until harvest.6

Darkling beetles can also cause damage on netted melons. These beetles are black to brown to gray in color and 1/8- to 1/4-inch long. Females lay eggs in the soil, and both larvae and adults feed on the fruit where the fruit is resting on the soil, causing “ground spot”. Cavities develop in the fruit, making them unmarketable. These beetles are difficult to control with insecticides once they are under the fruit. Insecticide treatments when the beetles are moving into the field can reduce damage. In the southwestern desert regions, insecticide applications should start when fruit net development begins and continue through harvest.3

Adult seedcorn maggots are gray-brown in color and about the size of a small housefly. The larvae (maggots) are pale yellowish-white and up to 1/4-inch long.2 Adults are active in the early spring and lay eggs in cool, wet soils, especially in soils with high levels of organic matter.2,5 Maggots bore into seed and stems of seedlings, destroying the seed and often killing seedlings. Management strategies include planting or transplanting on well-drained soils when soil temperatures are above 70°F at a 4-inch depth. Wait at least two to four weeks after incorporating a cover crops before planting, and avoid planting melons after root- or cole-crops.1,2,5

Several species of spider mites can occur on melons, with the two spotted spider mite being the most common.1 These insect-like creatures have eight legs on small (1/50th-inch long) oval bodies (Figure 3). They are found mostly on the undersides of leaves where they can produce spider-like webbing. They cause chlorosis and small specks (stippling) on leaves. Eventually, leaves can shrivel and die, exposing fruit and causing sunburn. They often proliferate during hot, dry conditions.1,3,4 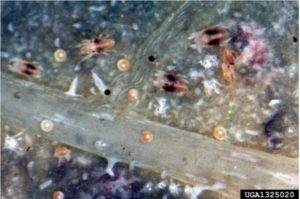 Spider mites are normally controlled by natural enemies, and outbreaks can occur following insecticide applications that harm beneficial insects.4,6 Avoid excessive nitrogen fertilization and water stress.3 Insecticidal soaps and neem oil can help reduce spider mite damage. However, applying soaps in direct sun or to drought-stressed plants may result in plant damage.4 Miticides, such as Agri-Mek®SC Miticide/ Insecticide, and Acramite®-50WS Miticide, can be used if needed.6

Individual results may vary, and performance may vary from location to location and from year to year. The information provided in this communication may not be an indicator of results you may obtain as local growing, soil and weather conditions may vary. Growers should evaluate data from multiple locations and years whenever possible. ALWAYS READ AND FOLLOW PESTICIDE LABEL DIRECTIONS. The recommendations in this article are based upon information obtained from the cited sources and should be used as a quick reference for information about melon insect pests. The content of this article should not be substituted for the professional opinion of a producer, grower, agronomist, pathologist and similar professional dealing with this specific crop.

SEMINIS DOES NOT WARRANT THE ACCURACY OF ANY INFORMATION OR TECHNICAL ADVICE PROVIDED HEREIN AND DISCLAIMS ALL LIABILITY FOR ANY CLAIM INVOLVING SUCH INFORMATION OR ADVICE. 170826152019 120117DME