» High tunnel tomato production is used to extend the growing season earlier in the spring and later in the fall.
» Marketable yield and fruit quality are typically higher in high tunnel systems than in field-grown tomatoes.

WHAT IS A HIGH TUNNEL?

High tunnels and hoop houses are terms used for solar heated, manually vented, plastic-covered cold frame structures used for fruit, vegetable, and ornamental crop production.1,2 High tunnels are covered with polyethylene plastic sheeting to provide better protection against wind and cold conditions. Passive solar heating can result in daytime temperatures inside the tunnel that are 30° to 40°F higher than the outside temperatures. If no other heating source is used, the nighttime temperatures in the tunnel are usually a few degrees warmer than the outside temperatures.1

High tunnels are used primarily to extend the growing season, allowing for production earlier in the spring and later in the fall. Increased average daily temperatures and protection from snow, wind, rain, and hail allow tomatoes to be harvested for the pre-season and post-season markets when premium prices are paid for locally grown tomatoes. High tunnel grown tomatoes can be harvested four to five weeks before fieldgrown tomatoes in the same location. The extended growing season also provides an extended period of cashflow.1,2

Figure 1. High tunnels are typically constructed from metal pipes that are covered with sheets of polyethylene. The sidewalls can be raised to allow ventilation.

Ideally, high tunnels should be placed on non-shaded, level sites with fertile, well-drained soils. Site locations are especially important for permanent tunnels that will not be moved.1,2 High tunnels are typically constructed from metal pipes and wooden stud frames (Figure 1). Tunnels should be large enough to allow for planting, production, and harvesting practices inside the tunnel. Temporary removal of the end walls can allow tillage and planting equipment to be used in the tunnel.3 High tunnels are usually 14 to 28 feet wide, 7 to 12 feet tall at the center, and 48 to 96 feet long.

Orientation of the tunnel to provide maximum and even exposure to solar radiation depends on the location. At latitudes north of 40°, an east-west orientation is recommended. For locations south of 40° a north-south orientation is recommended. However, the orientation of the long sides perpendicular to the prevailing winds will improve ventilation within the tunnel. The sidewall of the tunnel should be able to be rolled up to allow for ventilation. Because temperatures in the tunnel during daylight hours can exceed the temperatures needed for plant growth and fruit production, the sidewalls are usually rolled up early in the day and then closed late in the afternoon to retain heat. Opening the sidewalls is also used to lower humidity levels in the tunnel. If ambient nighttime temperatures are 55°F or higher, the side walls can be left open all night. Shade cloth may be needed to prevent sunburn of the fruit during summer months.1,3,4

At night and during periods of cloudy weather, the temperatures inside the high tunnel will typically be two to three degrees warmer than the ambient temperatures, depending on the conditions. Covering plants with row covers or low tunnels within the high tunnel can provide additional protection from frost, as well as protection from insect injury. In some cases, heaters can be used for short-term frost protection during unexpected cold periods. However, the longterm use of heaters in high tunnels is not economically feasible for most operations.1,2,3

The soil inside the tunnels should be at least six inches higher than the surrounding soil to facilitate drainage. Using raised beds in the tunnel will also result in warmer soils that further promote earliness of the crop. Covering raised beds with black or IRT plastic mulch also warms the soil, inhibits weed growth, and reduces water loss.1,2,3

The fertility and salt content of the soil in the tunnel should be monitored to maximize production. Because the soil does not receive natural rainfall, the salt left behind by evaporated irrigation water and mineral fertilizers can buildup, resulting in saline soils. If salt levels become too high, the plastic cover of the tunnel may need to be removed for a year to allow rainfall to leach the salt from the soil.1,3 Soilborne pathogens can also buildup in the soil of permanent high tunnels planted to tomatoes regularly. Movable tunnels can be relocated to new sites each year or two, eliminating the problems of salt and pathogen buildup.1

In high tunnel systems, tomato plants are usually planted in the soil. Four to six-week-old transplants can be planted once soil temperatures reach 60°F at a two-inch depth, usually four to six weeks before the frost-free date. Depending on the location and varieties used, fall planting can take place in early August for harvesting in mid-November to mid-December. Full season varieties require four to six square feet of space per plant, while early-season varieties often need less space.1,2,3 Typical planting arrangements are rows on 36- to 48-inch centers with in-row plant spacings of 18 to 24 inches. 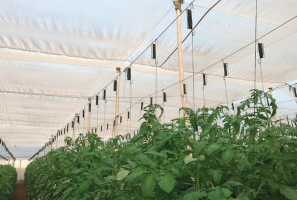 Figure 2. With a trellis support system, tomato plants are trained to grow up polypropylene strings that are attached to an overhead cable system.

Support systems are almost always used for tunnel grown tomato plants, even with determinate varieties. Plants usually grow taller in tunnels than they do in the field. Upright plants also allow for better light penetration and increased airflow in the canopy. This results in lower levels of foliar disease. Fewer fruit come into contact with the ground on supported plants, and upright plants allow for more plants per square foot of space. Support systems include cages, stakes, stake and weave systems, and trellising systems (Figure 2).1 Pruning suckers helps increase the earliness of the plants and improves air circulation in the canopy. In trellis systems, all suckers are usually removed, resulting in a single stem. In nontrellis systems, the suckers are usually pruned up to the sucker below the first flower cluster.1,4 Suckers should be removed before they are 4 inches long, and sucker removal should not take place when plants are wet.2

Tomato flowers are self-pollinating, but they do require air currents, vibration, or insects to move the pollen from the male to the female parts of the flower. The airflow resulting from open sidewalls is usually sufficient to result in adequate pollination. If the sidewalls need to remain closed for extended periods, then additional measures may be needed to assist in pollination. Plants or flower clusters can be vibrated, or the plant support system can be vibrated. Honeybees or bumblebees can also be introduced into the tunnel to pollinate the flowers.1,2

Water is usually applied using drip irrigation systems. Soil water levels should be monitored daily with a device such as a tensiometer. Tomatoes can use up 1.5 to 2.0 quarts of water per plant per day during the peak production period. However, a number of variables can make the water uptake even higher depending on the plant density, plant age, temperature, humidity, type of soil, and variety. Regular and adequate irrigation helps prevent problems such as fruit cracking and blossom end rot. The areas between beds should be kept dry to slow weed growth. Proper water management will also help keep humidity levels in the tunnel in the best range for plant growth and fruit set and reduce the incidence and severity of foliar diseases. Drip systems can also be used to apply nutrients during the season (fertigation).2

For additional agronomic information, please contact your local seed
representative.
Performance may vary from location to location and from year to year, as local growing, soil and weather conditions may vary. Growers should evaluate data from multiple locations and years whenever possible and should consider the impacts of these conditions on the grower’s fields. The recommendations in this article are based upon information obtained from the cited sources and should be used as a quick reference for information about vegetable production.
The content of this article should not be substituted for the professional opinion of a producer, grower, agronomist, pathologist and similar professional dealing with vegetable crops.
BAYER GROUP DOES NOT WARRANT THE ACCURACY OF ANY INFORMATION OR TECHNICAL ADVICE PROVIDED HEREIN AND DISCLAIMS ALL LIABILITY FOR ANY CLAIM INVOLVING SUCH INFORMATION OR ADVICE.
9068_SE_S7 Published 12-7-2020