Infections by the gummy stem blight pathogens can occur at any growth stage of the plant.4 Symptoms on watermelon leaves show up as circular to triangular, dark brown spots that usually appear first near the leaf margins (Figure 1A). Spots often develop first on the leaves that are shaded or stay moist for long periods. The spots can enlarge and coalesce until the entire leaf becomes blighted. The tissue in the center of the spots can crack and fall out (Figure 1B). Gummy stem blight also occurs on seedlings, where spots form on cotyledons and true leaves. Water-soaked areas can form on the cotyledons as the brown spots develop. If the hypocotyl of the seedling is colonized and girdled, seedlings can wilt and die.1,4

Figure 1. Foliar symptoms of gummy stem blight on watermelon. (A) Initial symptom of a brown, necrotic lesion near the leaf margin. (B) With time, the center tissue can crack and fall out of the lesion. Gerald Holmes, Strawberry Center, Cal Poly San Luis Obispo, Bugwood.org.

The name gummy stem blight comes from the amber to reddish-brown exudate (ooze) that forms on the stem cankers (lesions) (Figure 2). Stem infections do not normally kill older plants, but affected vines can wilt in the late disease stages, three to four weeks after infection, usually after fruit set.1,4 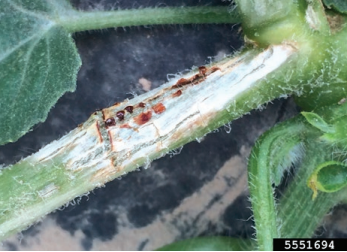 The fruit rot phase of the disease (also called black rot) typically only occurs when the vines are severely infected.5,6 Circular, greasy, greenish-tan to black spots develop initially on the blossom end of the fruit. Fruit lesions are sunken in the center and coalesce as they expand. The internal rind tissue turns dark brown to black and can become cracked.4,5 Black specks develop in the necrotic tissue of leaf, stem and fruit lesions (Figure 3). These black specks are the sexual and asexual spore producing structures of the fungus that produce sexual ascospores and asexual spores called conidia.1,4 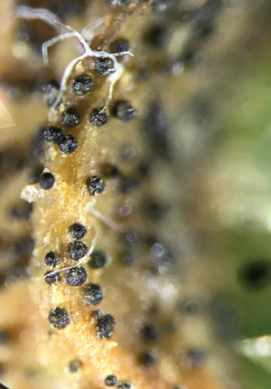 Figure 3. Black fruiting bodies of the fungus form in the necrotic tissues of leaf, stem, and fruit lesions.

Gummy stem blight affects many cucurbit crops, including watermelon, melon, cucumber, pumpkin, and squash. Non-cucurbit hosts include green bean, okra, tomato, and tobacco. The disease is caused by the fungi Stagonosporopsis citrulli, S. cucurbitacearum, and S. caricae. Stagonosporopsis cucurbitacearum can only infect cucurbit plants and is the species most commonly found on cucurbit crops.1 However, S. citrulli was most commonly isolated species from watermelon in South Carolina between 2015 and 2017 and is the dominant species on cucurbits in the southeastern U.S.3

The gummy stem blight fungi survive (overwinter) on infested crop debris, volunteer plants, and susceptible weed species. The pathogens can remain viable on infested debris for several years. The pathogens can also survive on infected seed.1,6 Gummy stem blight has a polycyclic cycle with plant to plant spread during the season. The pathogen is spread long distances on seed and by wind-dispersed ascospores. Shortdistance disease spread occurs by splashing water (rain or overhead irrigation) moving the conidia to nearby plants.4,7

Infection, disease development, and spread are substantially affected by moisture conditions. High humidity levels (>85%) and one to ten hours of continuous leaf wetness are needed for infection to occur. Further periods of wetness are needed for the development of lesions. Rainfall, overhead irrigation, and poor drainage can increase disease spread, infection, and symptom development. Symptoms typically appear seven to twelve days after infection.1,4,7 Wounding from mechanical injury, insect feeding, and other diseases can provide sites for infection. Harvest scars on the fruit also can serve as sites of infection leading to post-harvest decay.4

Crop debris should be plowed in promptly after harvest, and a two- to four-year rotation to non-host crops should be carried out following the occurrence of gummy stem blight. Plastic mulch should not be reused for a second cucurbit crop. Volunteer plants and cucurbit weed species in and around the planting should be removed.1,4,6

Gummy stem blight on watermelon is managed primarily with the application of fungicides.6 Starting applications as soon as conditions are favorable for disease development can help prevent the disease from becoming established. Fungicide applications often need to be initiated at or before the vinetouch stage.4,8 Repeated applications of protectant fungicides, such as chlorothalonil and mancozeb, can provide adequate control. However, curative/systemic fungicides are often more effective at managing gummy stem blight.1,3,4

Research has shown that fungicide applications can prevent substantial reductions in marketable fruit weight, especially later in the season when the disease is more prevalent. Marketable fruit weight from plants treated with chlorothalonil or mancozeb were 17% higher than that produced by nontreated plants in spring trials and a 169% higher in fall trails in a study done in South Carolina.3

Applications of combinations of the fungicides cyprodinil and fludioxonil or cyprodinil and difenoconazole were shown to reduce the formation of spore-producing fruiting bodies by the pathogen. Fewer fruiting bodies resulted in less disease spread within the field during the season.3 When disease pressures are high, fungicide applications have also been shown to increase the level of soluble solids in the fruit, as compared to fruit from non-treated plants. In addition, the number of sunburned and diseased fruit decreased with increasing numbers of fungicide applications.10

For additional agronomic information, please contact your local seed
representative.
Performance may vary from location to location and from year to year, as local growing, soil and weather conditions may vary. Growers should evaluate data from multiple locations and years whenever possible and should consider the impacts of these conditions on the grower’s fields. The recommendations in this article are based upon information obtained from the cited sources and should be used as a quick reference for information about watermelon production. The content of this article should not be substituted for the professional opinion of a producer, grower, agronomist, pathologist and similar professional dealing with this specific
crop.
BAYER GROUP DOES NOT WARRANT THE ACCURACY OF ANY INFORMATION OR TECHNICAL ADVICE PROVIDED HEREIN AND DISCLAIMS ALL LIABILITY FOR ANY CLAIM INVOLVING SUCH INFORMATION OR ADVICE.
9070_SE_S1 Published 07-02-2021