» Grading standards for cucumbers are provided in the USDA Agricultural Marketing Service.
» Slicing cucumbers are graded on size, shape, color, and several quality and condition characteristics.
» Fancy, U.S. No.1, and U.S. No. 2 are the three primary grades of slicing cucumbers designated by the USDA.

The U.S. grades of slicing cucumbers are listed and defined in Table 1. Other terms used to describe slicing cucumbers such as “Super Select”, “Select”, “Extra Large”, and “Jumbo”, have no meaning in terms of U.S. grading standards. However, these terms are commonly used in the industry to describe fruit quality and marketability of slicing cucumbers. Super Select generally refers to fruit that are mostly straight with minimal curvature, good color uniformity, and with no defects or constrictions. Select fruit may have some curve or tapering and some color irregularity or other defects, but the fruit are still marketable.

The grade of a lot of cucumbers is based on an average of the characteristics of the fruit determined from representative samples of containers and specimens (individual fruit) within the lot. Tolerances are set for each grade, specifying the allowed percentage of fruit that do not meet the standards for that grade category, and the inspection guidelines state the minimum numbers of containers and specimens that should be evaluated.2 In addition to the characteristics of individual fruit, the condition of the cucumber pack is also evaluated. The tightness of the pack of baskets and crates and the fullness (level below the edge of the container) of cartons are evaluated during an inspection.

Size – The diameter and length are measured when evaluating fruit size. Fruit diameter is the greatest dimension measured at right angles to the longitudinal axis of the fruit, exclusive of the warts. Fruit length is the greatest overall length measured in a straight line parallel to the longitudinal axis exclusive of the stem. A curved fruit is measured along a straight line, not along the curve of the fruit.

Shape – A “well formed” cucumber is “practically straight and not more than very slightly constricted or more than moderately tapered or pointed.”1 A “fairly well formed” cucumber may be “moderately curved but not deeply constricted, not extremely tapered or pointed and not otherwise misshapen” and a “badly deformed” cucumber is “so badly curved, constricted, tapered or otherwise so badly misshapen that the appearance is seriously affected” as defined by the USDA. Some variations of shape are allowed in with less variation in the U.S. Fancy grade and more variation in the U.S. No. 2 grade (Table 2).1 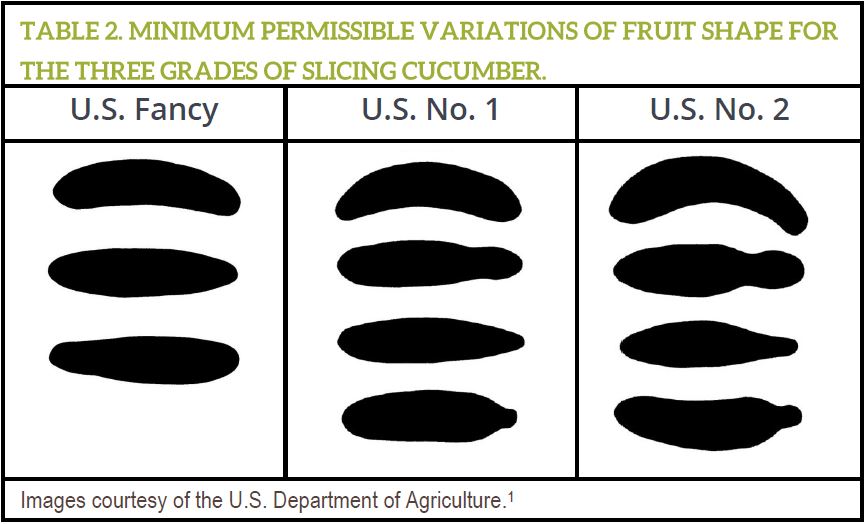 Color – The quality and uniformity of the green color of a cucumber is a primary factor in its market value. The designations for color are defined by the USDA as follows:

“Well colored” means that not less than three-fourths of the surface of the cucumber is of a medium green or darker color, and that at least a light green color extends to the blossom end on one side of the cucumber.

“Fairly well colored” means that not less than two-thirds of the surface of the cucumber is of a medium green or darker color, and that at least a light green color extends to within one-half inch of the blossom end on one side of the cucumber.

“Moderately colored” means that at least one-half of the surface of the cucumber is of a light green or darker color.

Undesirable characteristics are categorized as defects. One defect is related to maturity. An overgrown cucumber is one that “developed beyond the best stage for slicing.” An overgrown cucumber “yields to a slight pressure of the thumb”; has seeds that “may be tough and fibrous, and the pulp in the seed cavity is usually watery or jelly-like.” These fruit are typically large, dull in color, and unpalatable.

Other types of defects may be rated on a scale of “injury”, “damage”, or “serious damage” depending on the harmful effects of the defect on the appearance, edibility, and shipping quality of the fruit. Cucumbers are expected to be clean, free of dirt or staining. The requirement for cleanness for U. S. Fancy, U. S. Extra No. 1, U. S. No. 1 (including Small and Large) grades of cucumbers are that they be “free from damage by dirt or other foreign material.” The requirement for U. S. No. 2 cucumbers is that they be “free from serious damage by dirt or other foreign material.”

Scars are the brownish, corky tissues that develop on the fruit surface. The severity of scaring is rated from “injury” to “damage” to “serious damage” depending on the total area of scared tissue. Bruises are soft, flattened or depressed areas on the fruit, and the underlying tissue is often discolored. Bruising can manifest as sack imprints on the fruit, and it is rated as “damage” or “serious damage” when the affected area on the fruit reaches certain sizes. Cuts on the fruit can result from harvesting and transportation operations. Cuts are considered as damage when they are “fresh and more than slight”.

Additional defects that can affect the grade of cucumbers when severe include the following: freshness and firmness, insect damage, mosaic coloration, pulled/damaged ends from improper harvest, shriveled ends, sunken areas, internal open spaces, sunscald, yellowing, and freeze injury. Fruit decay from various diseases, including anthracnose, bacterial soft rot, black rot, and cottony leak, will also affect the grade if amount of decay is in excess of the tolerance. There is a tolerance of 10 percent for cucumbers in any lot which fail to meet the requirements of the grade for defects, including not more than 1 percent for decay.

Performance may vary from location to location and from year to year, as local growing, soil and weather conditions may vary. Growers should evaluate data from multiple locations and years whenever possible and should consider the impacts of these conditions on the grower’s fields. The recommendations in this article are based upon information obtained from the cited sources and should be used as a quick reference for information about cucumber production. The content of this article should not be substituted for the professional opinion of a producer, grower, agronomist, pathologist and similar professional dealing with this specific crop.

SEMINIS DOES NOT WARRANT THE ACCURACY OF ANY INFORMATION OR TECHNICAL ADVICE PROVIDED HEREIN AND DISCLAIMS ALL LIABILITY FOR ANY CLAIM INVOLVING SUCH INFORMATION OR ADVICE. 180118123357 080118DME