» Fusarium wilt of tomato is a soilborne disease that occurs worldwide.
» Once introduced to a field, the Fusarium wilt pathogen is almost impossible to eradicate.
» The best way to manage Fusarium wilt is to plant tomato varieties that are resistant to the races of the pathogen that are present in the field.

Fusarium wilt of tomato occurs in most regions where tomatoes are grown. This disease can result in yield losses of up to 80% when severe.1,2 The pathogen can infect the crop at all growth stages, entering through the roots. The fungus grows into the xylem (water conducting tissue) where it can spread within the plant. Colonizing the xylem results in the inhibition of water flow and the wilt symptoms.

Fusarium wilt is caused by the fungus Fusarium oxysporum forma specialis lycopersici (Fol). The “forma specialis” designation means that this specialized version of the species infects tomatoes. Three races (1,2, and 3) of the pathogen have been identified based on their ability to cause disease on tomato varieties with different forms of disease resistance.

Race 1 infects varieties with no genetic resistance to Fusarium wilt. This race is widely distributed, found in most tomato growing areas of the world. Race 2 was first identified in 1945 from a tomato variety that is resistant to race 1. Race 2 can now be found in many tomato growing areas of the world. Race 3 was first identified in Australia in 1978, and a few years later it was detected in Florida and then in California in 1987 on tomato varieties that are resistant to both races 1 and 2. Research indicates that the race 3 isolates have developed locally from race 2 isolates in California and Florida, rather than being introduced from Australia.3 In California, race 3 was found only in the Sutter Basin area for several years, but it has now spread to Fresno County and other major processing tomato growing areas in the state. Race 3 is now present in Mexico and areas of North and South Carolina.4

The initial symptoms of Fusarium wilt are a yellowing and wilting of leaves, usually after flowering when the tomato fruit are starting to increase in size.1,5 These symptoms often develop only on one side of a plant, or on one branch, or even on one side of a leaf. This pattern of symptom expression distinguishes Fusarium wilt from other wilt diseases of tomato (Figure 1). The symptoms start on the lower leaves of the plant and move upward as the disease progresses.1,5 At first, the leaves wilt during the warmest part of the day but may recover overnight.6 Eventually, the entire plant turns yellow, wilts, and dies. Infected plants are often stunted and produce fewer fruit.7,8 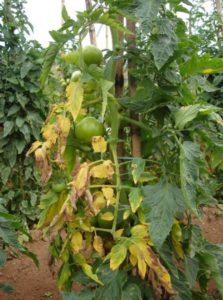 Figure 1. One-sided yellowing of leaves on a tomato plant infected with Fusarium wilt.

A reddish-brown to dark-brown discoloration develops in the vascular tissue within the plant, starting in the root system and spreading upward into the stems, branches, and petioles (Figure 2).1,5,7 The symptoms of Fusarium wilt can be similar to those of Verticillium wilt, and laboratory analysis may be needed to correctly identify the pathogen. The Fusarium wilt fungus can grow on the roots of other plants such as eggplant and peppers and weed species such as pigweed, mallow, and crabgrass, but the fungus does not cause disease symptoms on those hosts.6 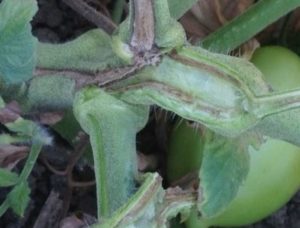 Figure 2. A reddish-brown discoloration of the vascular system in the roots and lower stem indicates colonization of the xylem tissue by the Fusarium wilt pathogen.

The Fusarium wilt pathogen can survive in the soil as spores for many years, even in the absence of a susceptible host. The fungus is spread within and between fields in infested soil, infected transplants, and (rarely) on infested seed.1,5,6 The fungus colonizes root tissue, entering through wounds such as nematode feeding sites. In fact, feeding by root knot nematodes can make Fusarium wilt resistant varieties more susceptible to the disease.6,8 Disease development is favored by warm weather (optimum soil temperatures of 82°F), poorly drained soil, and acidic soil conditions (pH of 5 to 5.6).5,6,7 The disease does not usually spread from plant to plant during the growing season. 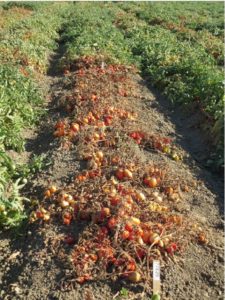 Figure 3. A field-trial showing a tomato variety that is susceptible to Fusarium wilt surrounded by varieties with resistance to the disease.

Additional management strategies focus on preventing the spread of the pathogen, preventing the buildup of inoculum, and reducing the favorability of conditions for disease development. Planting only certified seed and disease free transplants will help prevent the introduction of the pathogen into new locations. Because the pathogen can spread in infested soil and crop debris, it is important to thoroughly clean equipment, tools, and worker’s shoes and clothing when moving from infested to disease-free fields.1,5,6 Tomatoes should be planted on well-drained soils with pH levels between 6.5 and 7.0. More acidic soils can be treated to raise the pH to appropriate levels.1 Growers should avoid excessive nitrogen applications and use calcium nitrate fertilizers instead of ammonium nitrate.6 Because nematode feeding can increase rates of infection, treatments for root knot nematodes may be needed in fields with high populations of these nematodes.8 The cultivation of fields after crop establishment can cause wounding of roots and increase the incidence of infection. So post- planting tillage should be minimized.8

Long-term crop rotations away from tomato, and other hosts on which Fol can survive, can help keep population levels from increasing and reduce the likelihood of developing new races of the pathogen. However, Fol can survive in soil for many years, and crop rotation can never completely get rid of the pathogen.1,4,6 Tomato varieties with resistance to Fusarium wilt should not be considered as rotational crops because the fungus can reproduce on the roots of these varieties even when no symptoms are visible.

Individual results may vary, and performance may vary from location to location and from year to year. This result may not be an indicator of results you may obtain as local growing, soil and weather conditions may vary. Growers should evaluate data from multiple locations and years whenever possible. ALWAYS READ AND FOLLOW PESTICIDE LABEL DIRECTIONS. The recommendations in this article are based upon information obtained from the cited sources and should be used as a quick reference for information about diseases of tomato. The content of this article should not be substituted for the professional opinion of a producer, grower, agronomist, pathologist and similar professional dealing with this specific crop.

SEMINIS DOES NOT WARRANT THE ACCURACY OF ANY INFORMATION OR TECHNICAL ADVICE PROVIDED HEREIN AND DISCLAIMS ALL LIABILITY FOR ANY CLAIM INVOLVING SUCH INFORMATION OR ADVICE. 180118110035 022318DME