» The availability of fungicides allowed for use in certified organic sweet corn production systems is limited.
» Copper-based seed treatments have been shown to offer some protection against seedling diseases.
» Biological pesticides may provide additional disease control options in the near future.

There are a number of diseases that are problematic for sweet corn production. These include seed and seedling diseases, stalk rots and wilts, and foliar diseases, such as northern corn leaf blight, common rust, and common smut. Management of these diseases should begin with the selection of disease-resistant cultivars and the use of cultural practices, such as crop rotation and awareness of proper planting times and conditions.

In some cases, chemical treatments are useful to protect plants from infection or to slow disease spread. Conventional sweet corn growers can use fungicide treated seed to help reduce seed and seedling diseases, and they can apply foliar fungicides to reduce the severity of several foliar diseases. For sweet corn grown in certified organic production systems, however, the options for seed and foliar fungicide treatments are very limited.

The USDA-AMS established the National Organic Standards Program, a set of regulations that must be followed to obtain and retain organic certification for agricultural products. Those regulations include lists of allowed and prohibited substances, including pesticides, to help parties seeking certification with determining which pesticides may be used in a certified organic production system.

Pesticides composed of naturally occurring substances are generally allowed to be used, while synthetic substances generally are not. While, some synthetically manufactured products are allowed to be used, substances such as arsenic or mercury are not allowed, even though they are naturally occurring. Allowed substances include mineral-based materials, such as copper compounds and elemental sulfur, as well as biological-based pesticides, also known as bio-pesticides or biological control agents.1

Most of the standard seed treatment fungicides used for sweet corn, as well as the commonly used foliar fungicides, are synthetically manufactured, and therefore, are not allowed to be used in organic production systems.

A review several regional vegetable production guides reveals that very few organically approved fungicides and bactericides are typically included in the recommendations, most likely because they are not as effective as other available products. Some of the guides include statements such as, “Common disease problems include Stewart’s wilt, leaf blights, rust, and viruses. Key disease management practices in an organic system include crop rotation and the use of resistant varieties” (University of Kentucky)2 or “Whenever possible, grow disease resistant cultivars” (North Carolina State University)3, indicating a lack of effective chemical treatment options for organic production systems.

A 2012 evaluation of sweet corn seed treatments in the state of Washington5 included a copper hydroxide (Champ® Formula 2 Flowable) treatment. The copper hydroxide seed treatment did result in plant stands that were slightly better than stands seen in the non-treated control plots, but the stands and plant vigor ratings were significantly lower than those seen in plots planted with seeds that received standard seed treatments containing synthetic fungicides (Table 1). 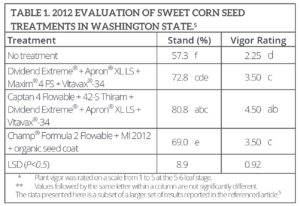 A multistate study compared the effectiveness of industry standard sweet corn seed treatments with other seed treatment options, including a copper hydroxide treatment.6 The results of these evaluations were grouped by location, with group-1 including locations where planting conditions were unusually cool and wet. Group-2 included locations that experienced more normal planting conditions. In this study the copper treatment resulted in improved plant stands over the non-treated control treatment in the group-1 locations that were cool and wet at planting. The copper treatment did not result in higher plant stands than the non-treated control in the group-2 locations (Table 2).

Biological products that are registered by the EPA for disease control are generally allowed to be used in organic production systems. These products are formulations of microorganisms, usually bacteria, that act against certain pathogens or by stimulating the defense responses of the host plant. Several biological products are under development or currently being evaluated for use on sweet corn, and they may provide additional management options for disease management in organic sweet corn production operations in the near future.

Individual results may vary, and performance may vary from location to location and from year to year. The information provided in this communication may not be an indicator of results you may obtain as local growing, soil and weather conditions may vary. Growers should evaluate data from multiple locations and years whenever possible. ALWAYS READ AND FOLLOW PESTICIDE LABEL DIRECTIONS. The recommendations in this article are based upon information obtained from the cited sources and should be used as a quick reference for information about onion diseases. The content of this article should not be substituted for the professional opinion of a producer, grower, agronomist, pathologist and similar professional dealing with this specific crop.

SEMINIS DOES NOT WARRANT THE ACCURACY OF ANY INFORMATION OR TECHNICAL ADVICE PROVIDED HEREIN AND DISCLAIMS ALL LIABILITY FOR ANY CLAIM INVOLVING SUCH INFORMATION OR ADVICE. 161028150521 042817DME