» Pruning involves the removal of suckers growing from leaf axils.
» Proper pruning may result in increased production of large fruit earlier in the season.
» Pruning may not be needed on determinate varieties and can result in lower yields.

The pruning of tomatoes involves the removal of axillary shoots, commonly known as suckers, usually from the lower part of the plant. Suckers develop from the axil, where the leaf petiole meets the stem, forming at each leaf node (Figure 1). If not removed, the suckers will develop into shoots that produce leaves and fruit. The additional foliage and fruit tissues compete with the rest of the plant for water, nutrients, and light, often resulting in more, but smaller fruit.1 However, over-pruning, the removal of too many suckers, can reduce the yield of marketable fruit. The goal of pruning is to create an optimal balance of vegetative growth and fruit production.2 Pruning can result in increased fruit size and increased earliness of the crown set. Less foliage also increases light penetration and air circulation in the lower canopy, which can reduce disease severity levels.3 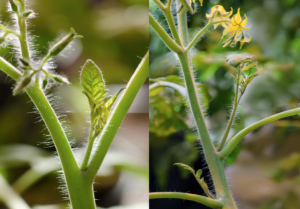 Figure 1. Axillary shoots, or suckers, emerge from the leaf axil, where the leaf petiole meets the stem.

There are two main types of tomatoes, indeterminate vine types and determinate bushy types. Indeterminate types are commonly used in greenhouse and high tunnel production systems. These types are typically pruned to create one, two, or three branches through the removal of all but one or two suckers. The vines are then trained to grow on support systems. Additional suckers are removed as the vines continue to grow.

Determinate types have a limited growth size, and they do not need to be pruned as much as the indeterminate types, if at all, depending on the variety and growing conditions.1,2 Non-pruned plants can produce a lot of foliage and a heavy load of smaller fruit, whereas moderate pruning can result in plants with smaller vines but larger fruit and earlier fruit maturation.4 Pruned plants can also be easier to work with and harvest from, and the more open canopies can improve the spray coverage of fungicide and insecticide applications.1

Over pruning can cause problems on determinate varieties, including reduced yields resulting from fewer flower clusters and fewer leaves to support developing fruit. More open canopies can also lead to increased levels of sunburn, blossom end rot, and catfacing.1 However, there is variation in recommendations on whether determinate tomatoes should be pruned at all, and if so, to what extent. Some experts state that determinate tomatoes benefit from moderate pruning, while others say that determinate types should never be pruned.1,4,5 It may come down to economics. It is estimated that pruning costs approximately $50 per acre. A grower will need to determine if pruning results in enough of an increase in fruit size and earliness, given the varieties used and local growing conditions, to justify the expense of pruning.

A study on pruning of several determinate varieties in a typical Florida production system found that light pruning had no impact on total marketable fruit weight when compared to non-pruned plants, although there was a small effect of pruning on the weight of large early-season fruit with some varieties. Heavier pruning was found to reduce the total yield of marketable fruit. The conclusion of that study was that for the varieties used, the benefits of pruning did not justify the costs.6

HOW AND WHEN TO PRUNE

Pruning is typically done four to five weeks after transplanting. Pruning just prior to the first stringing, in a stake-and-weave system, simplifies the process of accessing and removing suckers. Suckers should be removed when they are two to four inches long. Removing larger suckers, thicker than a pencil (Figure 2), will leave large wounds that are slow to heal and can be sites for infection by pathogens.1,3 Plants should be pruned when they are dry (no free-moisture on plant surfaces) to minimize the spread of foliar diseases such as bacterial spot. 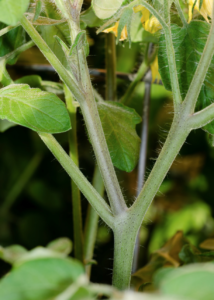 Figure 2. Large suckers should be removed with a sharp knife or shears to avoid the tearing of tissues.

Smaller suckers can be easily removed by pinching them with fingers, using a sideways, snapping motion. Larger suckers should be removed with a sharp knife or shears to prevent tearing of tissues. A standard recommendation for determinate varieties is to remove all suckers (as many as five or six) up to the one immediately below the first flower cluster (Figure 3). All suckers above the first fruit cluster should be left and allowed to grow and produce fruit. On strongly determinate varieties, it is sometimes recommended to leave one or two suckers below the first fruit cluster to improve overall yield.4 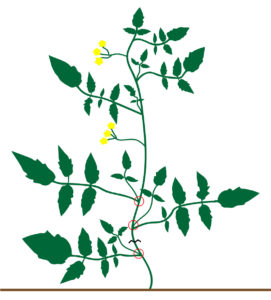 Figure 3. A commonly recommended pruning strategy for determinate tomatoes is to remove all of the suckers below the first fruit cluster.

Individual results may vary, and performance may vary from location to location and from year to year. This result may not be an indicator of results you may obtain as local growing, soil and weather conditions may vary. Growers should evaluate data from multiple locations and years whenever possible. ALWAYS READ AND FOLLOW PESTICIDE LABEL DIRECTIONS. The recommendations in this article are based upon information obtained from the cited sources and should be used as a quick reference for information about tomato production. The content of this article should not be substituted for the professional opinion of a producer, grower, agronomist, pathologist and similar professional deaing with this specific crop.

SEMINIS DOES NOT WARRANT THE ACCURACY OF ANY INFORMATION OR TECHNICAL ADVICE PROVIDED HEREIN AND DISCLAIMS ALL LIABILITY FOR ANY CLAIM INVOLVING SUCH INFORMATION OR ADVICE. 161028162021 120216DME