» Bean rust, white mold, aerial Pythium, and anthracnose are important foliar diseases of bean caused by fungal pathogens.
» Foliar diseases can occur from the seedling stage through harvest.
» Disease management plans should include a combination of cultural practices, the appropriate use of fungicides, and the use of disease-resistant varieties.

Symptoms of bean rust include small, circular, reddish-brown pustules that develop primarily on leaves, but can also appear on stems, petioles, and pods (Figure 1).1 As they mature, the pustules split open releasing masses of rust spores that are disseminated by wind and splashing rain. These spores can travel long distances in the wind. 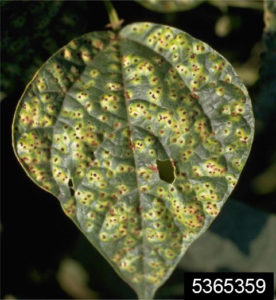 Infection by the rust spores is favored by long (10 to 18 hour) periods of high relative humidity (>95%) and temperatures between 60 and 77°F. Infections do not occur at temperatures above 82°F. This rust fungus can overwinter in the field on infested bean debris. Bean rust most commonly occurs in humid, southern subtropical regions, and it is rare in areas with more arid climates.2

Control strategies should include crop rotation and plowing under infested crop debris to lower levels of inoculum. Rust resistant bean varieties are available. However, there are over 250 known races of the pathogen, and no available varieties are resistant to all races. Foliar fungicide applications may be needed to manage this disease in some areas. Fungicides containing chlorotalonil, propiconazol, azoxystrobin, or pyraclostrobin can help protect plants from infection. Resistance to azoxystrobin and pyraclostrobin has developed in some bean rust populations, and there may be restrictions on applications of these fungicides.3

White mold infections can be very damaging to a bean crop. Field losses of over 90% have been reported in severe cases.1 White mold can occur in most bean growing areas in the U.S., but it tends to be more severe in the cooler northern areas. The signs and symptoms of white mold include masses of white, cottony mold growth on stems and leaves, often starting in the lower canopy, followed by a shriveling and death of affected tissues. Black fungal structures, called sclerotia, form on infected stems and pods (Figure 2). 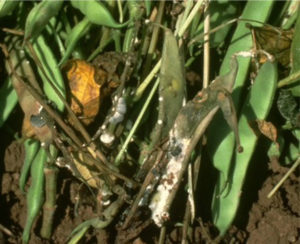 Figure 2. White, cottony mold growth and the black sclerotia of the white mold fungus on pods and stems of infected bean plants. University of Illinois Extension.

The fungal pathogen overwinters as sclerotia in the soil, and the pathogen can persist in soil for many years once established. Prolonged periods (7 to 10 days) of high soil moisture and moderate temperatures (60 to 65°F) induces the germination of sclerotia and the formation of small, tan, mushroom-like structures that produce the spores of the fungus. The spores are typically released early in the morning and are carried in wind currents. These spores land on and colonize senescing bean flower petals, which they use as a food source to infect healthy bean tissue (Figure 3). 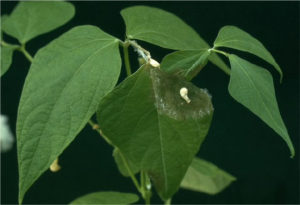 Figure 3. The white mold fungus uses the nutrients in fallen flower petals as a food source to
support the infection of healthy plant tissues.
University of Illinois Extension.

Resistance to white mold is available in very few varieties. However, upright varieties with more open canopies are usually less prone to severe levels of disease. Crop rotation to non-host crops can help lower inoculum levels in the field, but the white mold fungus has a very wide host range, so rotational crops must be chosen carefully.2

A number of fungicides (iprodione, fluazinam, thiophanate-methyl, and others) can be used to manage white mold. Applications should start at bloom to prevent colonization of blossoms by the fungus. Multiple applications may be necessary.3  There is also a biological product available for white mold control. Contans® WG is a formulation of the fungus Coniothyrium minitans that colonizes and degrades the white mold sclerotia, reducing the level of overwintering inoculum. This product needs to be applied to the soil and infested crop debris at least several weeks before a susceptible crop is planted, preferably in the fall just after harvest. Contans® is not effective as an in-season treatment.3,4

Species in the genus Pythium are usually known for causing root and seedling diseases on beans, but some species, including P. aphanidermatum, P. ultimum and P. debaryanum, are able to infect above ground plant parts as well, causing what is referred to as cottony leak, Pythium leak, or aerial Pythium. Disease development is favored by extended periods (48 to 72 hours) of wet foliage and splashing water that can move soilborne inoculum up into the canopy. Pods that rest on wet soil are also prone to infection by Pythium spp.5 Problems with aerial Pythium are more common in the southern regions of the U.S. than they are in northern areas.

Infected pods become water-soaked and covered with a white, cottony mold growth that resembles the early stages of white mold infection (Figure 4). However, no sclerotia are formed by this fungal-like pathogen, which belongs to the water mold group of organisms. 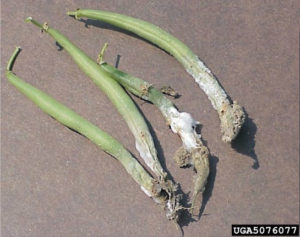 Partial resistance to aerial Pythium has been observed in some cultivars. It was hypothesized that bean varieties with a more upright habit and higher pod set would be less prone to infection and allow for better fungicide penetration into the canopy, but this was shown not to be the case.

Applications of metalaxyl and copper-based fungicides may result in reductions in severity, but the cost of treatment may not be economically justified.5

Anthracnose is caused by a fungus that can infect all above ground parts of the bean plant, causing dark brown lesions on stems, leaves, and pods. Leaf lesions usually start as dark areas on the veins on the undersides of leaves. Circular, sunken lesions develop on pods, and these become covered with gelatinous masses of pink colored spores when conditions are wet (Figure 5).1,3 Pod infections can result in infection of the seed causing some seed discoloration.

The anthracnose pathogen overwinters in infected seed and infested crop debris. Infection of plant tissue is favored by wet and cool to moderate (55 to 80°F) conditions, and the spores of the fungus are disseminated by splashing rain/irrigation, insects, animals, and people or equipment moving through infested fields.2

Varieties of beans with high levels of resistance to anthracnose are available. Several races of the pathogen exists, so a resistant variety may not be protected from all of the races present. The use of disease-free seed has reduced the occurrence of this disease significantly. A two- to three-year rotation to non-host crops lowers the level of inoculum present in a field, and applications of foliar fungicides (such as chlorothalonil) can help protect plants from infection.4

Individual results may vary, and performance may vary from location to location and from year to year. This result may not be an indicator of results you may obtain as local growing, soil and weather conditions may vary. Growers should evaluate data from multiple locations and years whenever possible. ALWAYS READ AND FOLLOW PESTICIDE LABEL DIRECTIONS. The recommendations in this article are based upon information obtained from the cited sources and should be used as a quick reference for information about bean diseases. The content of this article should not be substituted for the professional opinion of a producer, grower, agronomist, pathologist and similar professional dealing with this specific crop

SEMINIS DOES NOT WARRANT THE ACCURACY OF ANY INFORMATION OR TECHNICAL ADVICE PROVIDED HEREIN AND DISCLAIMS ALL LIABILITY FOR ANY CLAIM INVOLVING SUCH INFORMATION OR ADVICE. 160727162137  092916DME