Flea Beetles on Broccoli and Cauliflower

Flea Beetles on Broccoli and Cauliflower 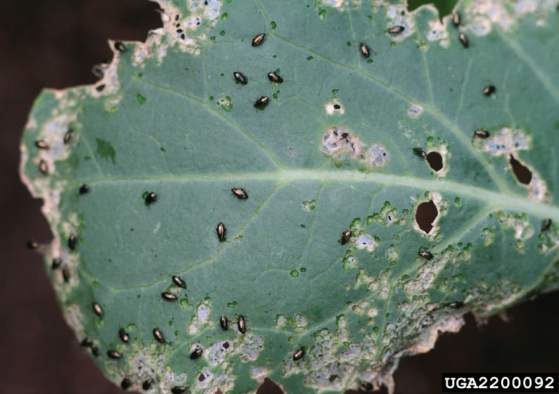 Flea beetles can be present on brassica crops at any time during the season, but they are most commonly found in the spring. The beetles overwinter as adults in protected areas, such as fencerows, the edges of woods, and under leaf litter and plant debris. The adults usually become active as temperatures reach 50°F in the spring. Flea beetles are good fliers, and they can disperse over long distances. Adult flea beetles typically start feeding on weed species and then move into crop fields after seedlings emerge or are transplanted. The beetles are attracted to crucifer plants by compounds called glucosinolates (or mustard oil glycosides) that these types of plants produce.1,2 Female beetles lay eggs in the soil near host plants. The crucifer flea beetle also lays eggs in “gnawed-out areas of roots.”1 The larvae feed on plant roots, and they eventually pupate while underground. The second brood of adult beetles emerges in mid-June to mid-August. For most flea beetle species, it takes six to ten weeks for an adult to develop from an egg.1,3

Flea beetle damage is caused mainly by feeding adults. Flea beetles feed primarily on the undersides of leaves. The beetles create pits and small, round to irregularly shaped holes in the leaves (Figure 1). When severe, feeding damage can stunt the growth of or kill seedlings. Damage is most severe on newly emerged, direct-seeded plants and young, transplanted seedlings (Figure 3). Once plants have reached the stage where they have produced more than five true leaves, they are less susceptible to damage from flea beetles. As broccoli and cauliflower plants mature, feeding is usually restricted to areas near the leaf margins.3 However, damage to heads can reduce the market quality of the product. Feeding wounds can also provide an entryway for diseases such as black rot and Alternaria leaf spot, and flea beetles can serve as vectors of some plant pathogens.1,2,3 Flea beetle feeding and the associated amount of damage gradually decline in the fall. 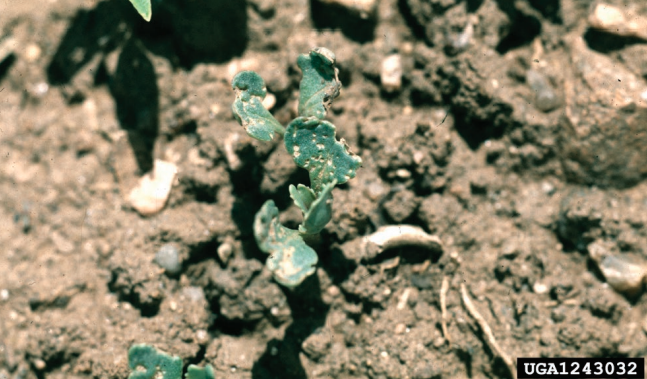 When plants are young, scout fields two to three times per week. Flea beetles are most active and easiest to observe on calm, sunny days. However, they tend to hop when disturbed, so they can be difficult to count. Sample plants randomly, but monitor field borders most closely. Flea beetle feeding damage and yellow sticky cards can also be used to help determine flea beetle population sizes. If plants have fewer than six true leaves, treat for flea beetles when one or more beetles are found per plant or if beetle feeding is stunting plant growth.1,3

There are several natural enemies of flea beetles, including predators such as lacewing larvae, big eyed bugs, damsel bugs, and callops beetles, the parasitoid wasp Microctonus vittata, and the fungal pathogen Beauvaria bassiana. However, these predators and parasites may not have much of an effect on flea beetle populations.1,4

Insecticides can be used to manage flea beetles on broccoli and cauliflower. Foliar applications are usually made just before thinning if the number of flea beetles per plant has reached the action threshold. However, growers should always follow the application directions on the product label. It is best to treat when the insects are most active (warm, sunny, calm days). Some insecticides can be applied to the soil at planting. Partial control can be obtained by using insecticidal soaps applied at the cotyledon stage.1,2,3,5,6

Performance may vary from location to location and from year to year, as local growing, soil and weather conditions may vary. Growers should evaluate data from multiple locations and years whenever possible and should consider the impacts of these conditions on the grower’s fields. The recommendations in this article are based upon information obtained from the cited sources and should be used as a quick reference for information about broccoli production.

The content of this article should not be substituted for the professional opinion of a producer, grower, agronomist, pathologist and similar professional dealing with this specific crop.

BAYER GROUP DOES NOT WARRANT THE ACCURACY OF ANY INFORMATION OR TECHNICAL ADVICE PROVIDED HEREIN AND DISCLAIMS ALL LIABILITY FOR ANY CLAIM INVOLVING SUCH INFORMATION OR ADVICE.
9053_SE_S3 Published 04-14-2021