Symptoms of infection by the Cucurbit leaf crumple virus (CuLCrV) vary with the type of host and the age of the plant at the time of infection. Squashes and pumpkins are the most susceptible to CuLCrV. Infected plants are stunted and have thickened, distorted leaves that show a light green to yellow mottling pattern. Leaves of infected yellow squash plants are curled and crumpled (Figure 1). These leaves often have rounded edges.1,2 Fruit on infected yellow squash plants are bumpy and have green streaks (Figure 2). Leaves on infected zucchini plants are also curled and crumpled, but the leaf edges are not rounded, and there are no symptoms on zucchini fruit.2 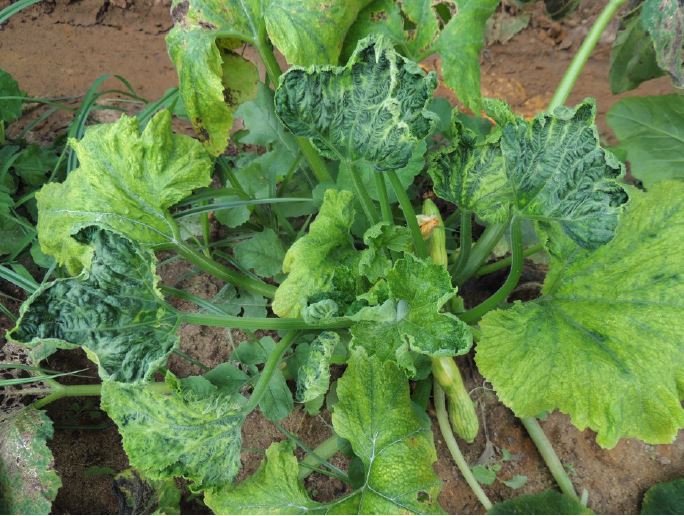 Watermelons are susceptible to infection by Cucurbit leaf crumple virus (CuLCrV), and plants are initially stunted and develop crumpled, yellowed leaves. However, after 28 days the plants start to recover, and newly formed leaves are not symptomatic. CuLCrV infected muskmelons have crumpled and downward curling leaves, and like watermelons, muskmelon plants start to recover after 21 to 28 days. Because watermelon and muskmelon plants start growing normally in three to four weeks, the effect of CuLCrV infection on the fruit yields of these crops is limited. 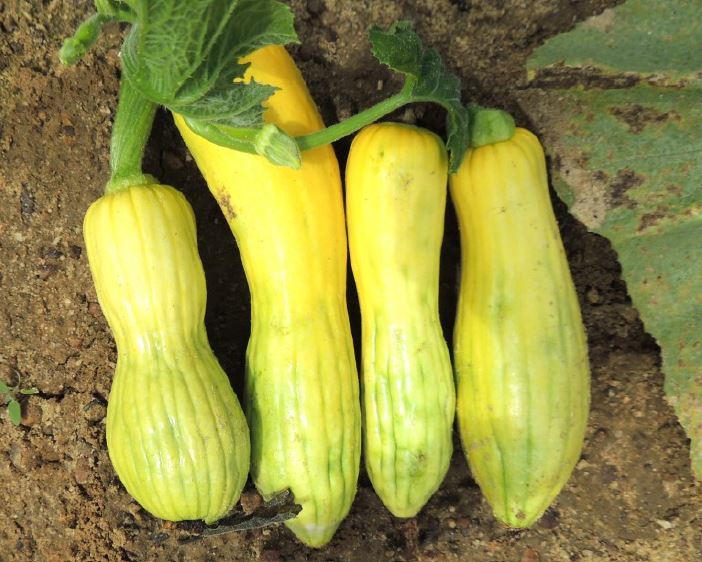 In 2007, green beans growing next to watermelon fields in Florida started showing virus-like symptoms of leaf mosaic (Figure 3), and the bean plants were found to be infected by CuLCrV.4 In 2016 and 2017, hundreds of acres of beans in Georgia and northern Florida were plowed under because of CuLCrV infection. In 2017, CuLCrv infection of snap bean caused yield losses of up to 80% in some locations. 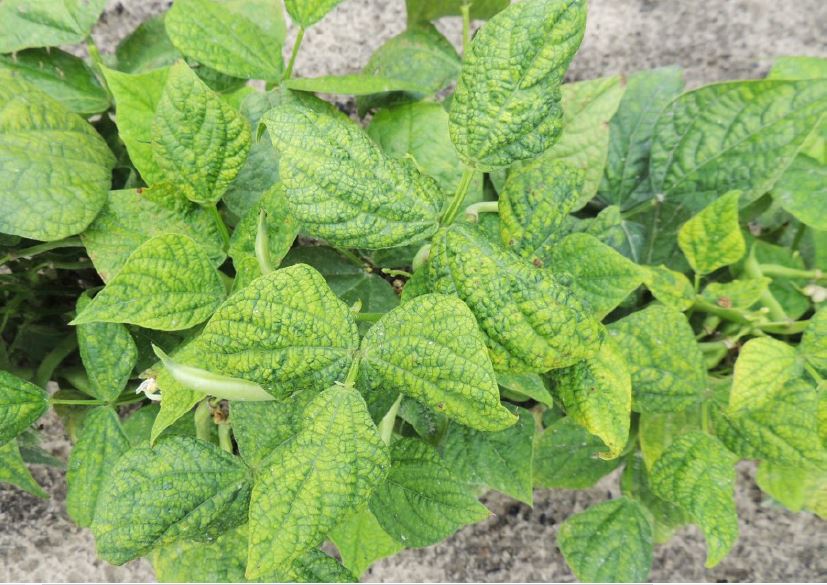 CuLCrV has a narrow host range, mostly infecting cultivated and weedy species of cucurbits. Weed and volunteer hosts can serve as reservoirs of CuLCrV for plantings of cucurbits. Balsam-apple and creeping cucumber are examples of weed species that are hosts for CuLCrV in Florida.3

CuLCrV is transmitted (or vectored) from plant to plant by whiteflies (Bemisia tabaci). A specific biotype (biotype B) of whitefly, common in the southern US and northern Mexico, is the only confirmed vector of CuLCrV. Whiteflies transmit this virus in what is called a persistent, circulative manner, meaning that once a whitefly acquires the virus from an infected host, it can then transmit the virus to other host plants several days (up to the lifespan of the insect).1 An adult whitefly needs to feed on an infected plant for at least 30 minutes to acquire CuLCrV. The virus then circulates through the body of the insect, and after a period of 6 to 8 hours, the whitefly can transmit the virus to other host plants. It takes another feeding period of 15 to 30 minutes to transmit the virus. Unlike some viruses, CuLCrV cannot be transmitted mechanically in infected plant sap, and this virus does not appear to be seedborne.

CuLCrV cannot survive outside of a living plant host or the whitefly vector. Therefore, the pathogen does not survive in soil or infested crop debris. Infection only occurs when the virus is vectored from a living host.  In Florida, the virus survives on overlapping cucurbit crops and ubiquitous cucurbit weed hosts. In California, cucurbits are usually not grown during the winter months, and there are no cucurbit weeds present. The virus probably moves into California from reservoir hosts, such as buffalo gourd, in northern Mexico, as whiteflies migrate northward. This cucurbit free period probably explains the low incidence of CuLCrV infection in the spring in California. 1

In most areas, disease incidence levels are highest on late-season plantings. The higher disease levels are the result of increased levels of inoculum in earlier planted crops and from larger populations of whiteflies.

Efforts to manage cucurbit leaf crumple may be needed for highly susceptible cucurbit crops, including most squashes and pumpkins, and possibly for watermelon and muskmelon/cantaloupe, which are less susceptible. Plant healthy, whitefly-free transplants. If possible, avoid planting near or downwind from established cucurbit plantings, especially if whiteflies or virus symptoms are present. 1

Rogue out and destroy any plants that develop symptoms of CuLCrV infection early in the season and manage volunteers and weeds that may serve as virus reservoirs and sources of whiteflies.

The use of row covers and reflective mulches can help reduce the number of whiteflies in the crop and lower rates of transmission of the virus early in the season. Silver and UV reflecting mulches have been shown to be effective for reducing whitefly populations on watermelon plantings early in the season until the canopy covers the mulch.3,5 Row covers physically prevent whiteflies from reaching the crop if the cover edges are buried properly. However, row covers need to be removed before flowering to allow pollination by insects, which is needed for fruit formation.1

To reduce the spread of CuLCrV and eliminate sources of whiteflies, destroy cucurbit crops promptly after the final harvest.1 Some growers apply a “burn down” herbicide after the final harvest to reduce the spread of viruses and whiteflies. In some cases, insecticides or crop oils are added to the herbicide treatment to prevent the movement of whiteflies from a declining crop. However, it is not clear that the effectiveness of this practice justifies the added cost.

Performance may vary from location to location and from year to year, as local growing, soil and weather conditions may vary. Growers should evaluate data from multiple locations and years whenever possible and should consider the impacts of these conditions on the grower’s fields. The recommendations in this article are based upon information obtained from the cited sources and should be used as a quick reference for information about cucurbit diseases. The content of this article should not be substituted for the professional opinion of a producer, grower, agronomist, pathologist and similar professional dealing with this specific crop.

SEMINIS DOES NOT WARRANT THE ACCURACY OF ANY INFORMATION OR TECHNICAL ADVICE PROVIDED HEREIN AND DISCLAIMS ALL LIABILITY FOR ANY CLAIM INVOLVING SUCH INFORMATION OR ADVICE.  180626095538 082818DME