» Most slicing cucumbers are hand harvested in multiple-harvest operations.
» Methods for predicting harvest dates helps with scheduling labor and harvest equipment.
» Harvested fruit should be cooled quickly after harvest and stored properly to maintain quality. 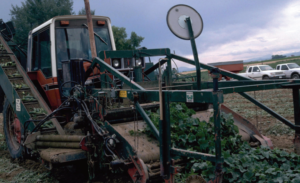 To obtain fruit with the optimal taste and texture, it is best to harvest when the fruit are one and a quarter to two inches in diameter and seven to eight and a half inches long, depending on the cultivar.2,3 For purposes of scheduling labor and equipment as well as pest management practices, it is
advantageous to predict when the first fruit will reach this optimal stage.4

Most commercial slicing cucumber varieties have maturity classifications of 48 to 55 days (planting to harvest), but the actual number of days to harvest varies with conditions such as air and soil temperature, moisture, and
nutrition.

A more accurate indicator is that fruit will be ready to harvest eight to te days from the time that the first fully open female flowers appear (Figure 2).1,2 If growing conditions are favorable, fruit can grow to over marketable size (over 2 inches in diameter) by twelve days after the first female flowers are fully open. Therefore, correctly scheduling harvesting is critical. This is especially important because large fruit left on the vine will suppress subsequent fruit set. 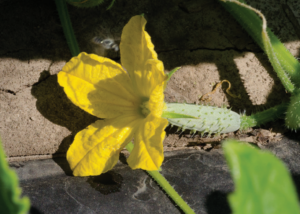 Another method that is used to predict when fruit will be ready for harvest is the use of heat units (HU), also known as growing degree days. Heat units are calculated by comparing daily temperatures to a base temperature and adding up the daily difference values as the season progresses.4

Once fruit reaches maturity, frequent and timely harvests are needed to keep plants in a reproductive phase. Cucumber plants limit the number of fruit that they will have on the plant at one time, and additional fruit set will be suppressed if that number has been reached and fruit are not removed.2 This requires harvesting one to three times per week, usually every other day during the peak of the season, depending on the region.2,3 In North Carolina, fruit are harvested two to three times per week over a two to four week period, while in Wisconsin harvesting once per week can be sufficient. In areas of California and Ohio, the harvest period can last as long as ten weeks. However, many of the newer cultivars have a more concentrated fruit set, resulting in fewer harvests in a multi-harvest system. This can help to reduce labor costs.4

Handle harvested fruit as gently as possible, and avoid leaving fruit exposed to direct sun for extended periods. Fruit should be cooled as quickly as possible after harvest to remove field heat. This will help to extend the shelf-life and maintain the appearance of the fruit.1,3 Hydrocooling is the most effective method to cool fruit, but forced-air cooling and drenching fruit with cold well water in bulk containers can also be used to rapidly cool fruit brought in from the field.3,5

After sorting, grading, and packing (see Seminis Agronomic Spotlight)6, fruit should be stored at 55°F with a relative humidity of 95%. Storage at temperatures below 50°F will result in pitting and color changes of the fruit.3,5 Cucumber fruit should not be stored near fruits or vegetables (bananas, tomatoes, melons) that produce ethylene gas, as this will result in rapid yellowing and decay of the fruit.

Performance may vary from location to location and from year to year, as local growing, soil and weather conditions may vary. Growers should evaluate data from multiple locations and years whenever possible and should consider the impacts of these conditions on the grower’s fields. The recommendations in this article are based upon information obtained from the cited sources and should be used as a quick reference for information about cucumber production.

The content of this article should not be substituted for the professional opinion of a producer, grower, agronomist, pathologist, and similar professional dealing with this specific crop.

BAYER GROUP DOES NOT WARRANT THE ACCURACY OF ANY INFORMATION OR TECHNICAL ADVICE PROVIDED HEREIN AND DISCLAIMS ALL LIABILITY FOR ANY CLAIM INVOLVING SUCH INFORMATION OR ADVICE. 7057_S1 Published 8/08/2019