» Cucumber green mottle mosaic is a relatively new disease of watermelon in the U.S.
» The disease results in symptoms on leaves and fruit, resulting in significant yield losses.
» Management should include the use of virus-free seed and sanitation procedures.

Although it has been know to occur in Europe and Asia for many years, Cucumber Green Mottle Mosaic (CGMM), caused by the Cucumber Green Mottle Mosaic Virus (CGMMV), is a disease of cucurbit crops that was first found in the U.S. in 2013.1 Because it is easily transmitted, can overwinter in infested plant debris, and has the potential to substantially impact yields, CGMM is becoming a concern for cucurbit growers in the U.S.

CGMMV was first detected in the U.S. infecting melons growing in California in 2013. The host range of the pathogen is mostly restricted to cucurbitaceous plants including watermelon, melon, cucumber, pumpkin, squash, and gourds. Cucumbers are especially susceptible, followed by melons and watermelon, with squashes and pumpkin being somewhat less susceptible. Bottle gourd, which is commonly used as a rootstock for grafted watermelons, is very susceptible, and can serve as a source of infection.2

Unlike most plant pathogenic viruses that rely on insect vectors to spread from plant to plant, the CGMMV is not known to be insect transmitted. It is mostly spread from plant to plant through mechanical transmission, which occurs when the virus particles in sap or infested debris from an infected plant come into contact with a healthy plant, usually through a wound.

The pathogen also spreads easily when plants are pruned or otherwise handled during transplant production, by grafting onto infected root tocks, and by tools and equipment coming into contact with infected plants in the field. The disease is also known to be seed-transmitted. This is probably an important means for introducing the pathogen into an area, but rates of seed transmission are fairly low, so most epidemics are probably not the direct result of using infected seed.4

Symptoms of CGMM include mottling and mosaic (patches of light and dark green) on leaves (Figure 1) and fruit, vein clearing, leaf deformation, bleaching of mature leaves, and stunting of plant growth. Leaf deformation is more likely to occur when temperatures are low. Symptoms of CGMM are difficult to distinguish from those of diseases caused by other viruses, and diagnosis should not be based on symptoms alone. Plants suspected of being infected with CGMMV should be tested to verify the presence of the virus.2 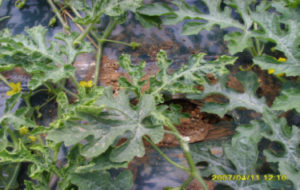 Plants can be become infected in the seedling stage, but symptoms are usually not seen until plants reach the second or third true leaf stage. The fruit of infected plants may be symptomless or can be severely spotted, streaked, and distorted (Figure 2). Fruit symptoms are more likely to occur during periods of high temperatures. The most devastating effect of CGMM is that internal flesh of the fruit may become discolored or necrotic (brown), even when there are no symptoms showing on the outside of the fruit.

This can render entire fields unmarketable. Infection at the seedling stage usually results in more severe symptom development and greater reductions of yield. Fruit can be aborted (fruit drop) on infected plants, and yield reductions of up to 25% have been observed.5 Low temperatures and low light levels (i.e. cloudy conditions) early in the season usually result in the development of more severe symptoms and greater yield losses. 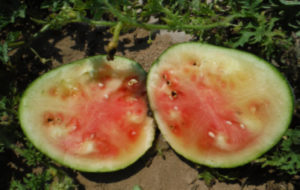 For transplant production, seedlings should be inspected regularly for symptoms beginning at the second true leaf stage, and suspected infections should be confirmed through testing by a plant diagnostic lab. If the virus is found to be present in U.S. fields or greenhouses, local and federal regulatory agencies should be notified immediately for removal and remediation guidance, as CGMMV is considered a quarantine pest by USDA-APHIS.

The disease is easily spread on hands, clothing, and tools when plants are handled during transplant production and grafting procedures. It is important to institute and monitor a program of hygiene for workers and visitors to the greenhouse. Hands should be washed regularly, and tools should be sanitized with a solution of 2% Virkon®S. The area surrounding the greenhouse should be inspected for volunteer plants and cucurbitaceous weeds that may be sources of infection. Thoroughly clean and disinfect the greenhouse at the end of the season.

Transplants should be inspected for the presence of symptoms prior to planting in the field. It has been shown that dipping the roots of transplants in dilute skim milk (1 part milk in 9 parts water) can protect them from inoculum in debris buried in the soil.3

Continue to inspect plants in the field for symptoms of CGMM at regular intervals during the growing season, and have plants that are suspected of being infected tested by a diagnostic lab.

As with transplant production, instituting a worker hygiene program, including regular hand washing, can help limit the spread of the disease within the field. Minimize crop handling and other procedures that may wound the plants, especially for the first few weeks after transplanting.

Because the pathogen can survive on infested plant debris for at least 17 months, use a crop rotation schedule with two to three years between cucurbitaceous crops.

Individual results may vary, and performance may vary from location to location and from year to year. The information provided in this communication may not be an indicator of results you may obtain as local growing, soil and weather conditions may vary. Growers should evaluate data from multiple locations and years whenever possible.ALWAYS READ AND FOLLOW PESTICIDE LABEL DIRECTIONS. The recommendations in this article are based upon information obtained from the cited sources and should be used as a quick reference for information about watermelon and cucumber green mottle mosaic. The content of this article should not be substituted for the professional opinion of a producer, grower, agronomist, pathologist and similar professional dealing with these crops.

SEMINIS DOES NOT WARRANT THE ACCURACY OF ANY INFORMATION OR TECHNICAL ADVICE PROVIDED HEREIN AND DISCLAIMS ALL LIABILITY FOR ANY CLAIM INVOLVING SUCH INFORMATION OR ADVICE. 160422150429 DME051816