» Managed honey bees are the primary pollinators of commercial crops, but wild bee species also serve as pollinators.
» Care should be taken to protect pollinators from exposure to pesticides.
» Contracts for pollination services should include details on several key criteria.

Several types of animals act as pollinators, including some birds and bats, but most pollinators are insects, and some of the most efficient pollinators are bees (Figure 1). There are many types of bees, and several of them can be helpful in pollinating specific crops. It is estimated that native bee species are responsible for about twenty five percent of the pollination activity on crops in the U.S., with European and African honey bees responsible for the other seventy five percent. There are a variety of factors impacting honey bees – the biggest factor being the varroa mite – as well as disease, poor nutrition, pesticides and challenging weather conditions. These factors and low honey prices have reduced the availability of honey bees for pollination, resulting in an increased interest using native bees for crop pollination.1 However, honey bees are to date more reliable pollinators of commercial crops because they can be managed. 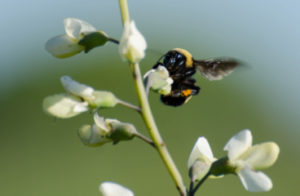 Populations of native bees can be enhanced by protecting and providing nesting sites, promoting the availability of food sources, and protecting bees from pesticide exposure.2

Pesticides are used to protect crops from insect, weed, and disease problems, and their use can be essential for producing some crops in some areas. However, some pesticides are toxic to insect pollinators, and steps should be taken to protect bees from exposure to these products. As the name indicates, insecticides are designed to manage insect pests, but they can also be toxic to beneficial insects, such as bees. Other types of pesticides may also be harmful to bees, so exposure to these products should also be considered.3 Always read the label for information regarding a product’s toxicity to bees and the proper application techniques and timings that should be used to minimize bee exposure.

Bees can die from direct exposure to insecticides in the field while they are foraging. They can also pick up pesticides and bring them back to the colony, resulting in the death of other bees. Steps can be taken to reduce the exposure of bees to insecticides and the likelihood of them bringing them back to the colony. Bees normally forage for pollen in the morning and early afternoon. So applying pesticides in the evening will reduce the chances of directly spraying foraging bees. Always avoid applying pesticides directly to the blossoms during the pollination period.

Different insecticides have different toxicities to bees. Therefore, selecting products that are effective against the target pest, but less toxic to bees can reduce the potential for negative effects on bees in the field depending on application method and amount applied. Pesticides also have different rates of degradation and residual activity, and choosing products with short periods of residual activity is also beneficial. Always read the pesticide label for information about the effect that a pesticide can have on pollinators.

Several measures should be taken to protect colonies from spay applications. Spraying during windy conditions increases problems with drift and should be avoided. Also, sprays should not be applied up-wind of colony locations. Exposure from drift can be eliminated by temporarily moving colonies at least four miles from areas to be treated. If colonies cannot be relocated, preventing bees from leaving the colony by covering with a well ventilated screen covering during normal foraging times can be helpful. Bee mortality from overheating can result from such covering, however, so the coverage time should be short, and colonies may need to be sprayed with clean water to prevent overheating.1 When pesticide applications need to be made while pollinators are present, it is important for the grower and the beekeeper to communicate about what activities are planned and the available options.

When using honey bees, it is important to provide an adequate number of colonies per area and to place them in the field so as to maximize pollination activity in the crop. Different crops require different numbers of bees depending on the types of flowers they produce and how the pollen is disseminated. Cucumbers have separate male and female flowers, and the pollen is not wind-blown. For cucumbers an average of 2.1 hives per acre should be present. For cantaloupe, recommendations vary from 0.5 to 5 hives per acre, with an average of 2.4. The recommendation for squash and watermelon plantings is about 1 hive per acre.1

Bees fly in a linear pattern when leaving the hive, so orientation and placement of the hive is important. Hives should be placed around the perimeter of the field in groups of three hives. Colonies placed downwind of the crop to be pollinated are more likely to forage in and pollinate that crop. If bees are placed upwind of the crop they may be more attracted to other food sources (flowers).

Honey bees need pollen from diverse sources to obtain the balance of nutrients they require, and other flowers near the planting may be more attractive than the flowers in the target crop. Bees in a hive that has moved more than two miles from it last location (naïve bees) will initially forage in the plants that are closest to, and upwind of the colony, but after a few days the bees will start to seek out other sources of pollen and spend less time in the target crop. So it is important to rotate colonies during peek pollination periods to make sure that the activity in the target crop is adequate.

The pollination activity of bees varies with the time of the season, the reproduction activity of the colony, and the size of the colony. Bee activity is usually lower early in the season, and increases as the season progresses. So, more colonies may be needed to adequately pollinate an early season crop. Developing bee larvae need lots of pollen, so colonies that are actively reproducing are going to spend more time foraging and pollinating. Also, larger colonies forage more than do smaller ones. One large colony will pollinate more effectively than three small colonies, even if the over all number of bees is the same.

» Dates of placement and removal of bees in the crop or relative time of placement in relation to bloom conditions.
» The number and strength (activity) of colonies to be provided.
» An independent verification of bee numbers and strength.
» The pattern of colony placement and colony rotation schedules.
» Agreement on timing of notifications of pesticide applications and types of pesticides likely to be applied.
» Field access rights for the beekeeper.
» The cost of the pollination services, including extra fees if hives need to be moved because of pesticide applications.

For additional agronomic information, please contact your local seed representative. Developed in partnership with Technology, Development & Agronomy by Monsanto.  Individual results may vary, and performance may vary from location to location and from year to year. The information provided in this communication may not be an indicator of results you may obtain as local growing, soil and weather conditions may vary. Growers should evaluate data from multiple locations and years whenever possible. ALWAYS READ AND FOLLOW PESTICIDE LABEL DIRECTIONS. The recommendations in this article are based upon information obtained from the cited sources and should be used as a quick reference for information about bees and crop pollination. The content of this article should not be substituted for the professional opinion of a producer, grower, agronomist, pathologist and similar professional dealing with these crops.

SEMINIS DOES NOT WARRANT THE ACCURACY OF ANY INFORMATION OR TECHNICAL ADVICE PROVIDED HEREIN AND DISCLAIMS ALL LIABILITY FOR ANY CLAIM INVOLVING SUCH INFORMATION OR ADVICE. 160330081939 041416DME